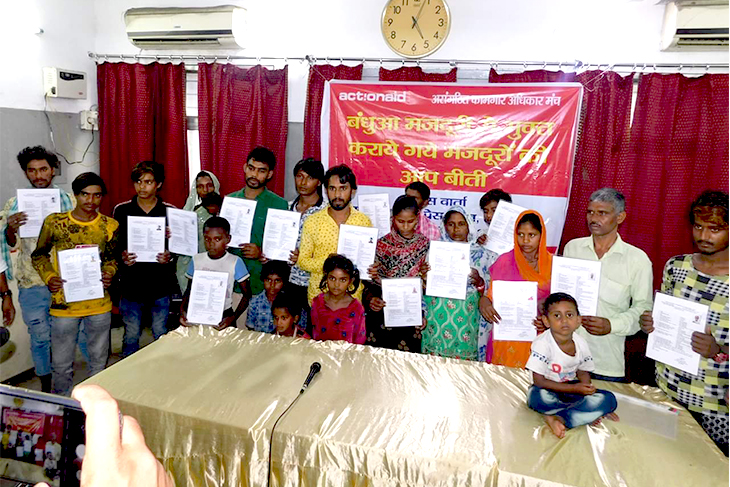 On August 24, a community-based human rights defender staying in Muzaffarnagar district informed colleagues in ActionAid Association’s Uttar Pradesh and Uttarakhand Regional Office that he had heard reports that 17 people from Uttar Pradesh were being forced to work as bonded labour in a jaggery factory in Pune, Maharashtra. Colleagues contacted Hamal Panchayat, a Pune-based organization working with informal sector workers and requested them to investigate the matter. A local team found that the reports were true – 17 people, including four women and one child, from the districts of Muzaffarnagar, Saharanpur, Bijnor and Sitapur in UP, were working as bonded labour in the concerned factory. District authorities were informed, a rescue team was constituted, and a rescue mission began on the evening of August 29 and continued till the morning of the next day.

Workers were found living and working under extremely deplorable conditions. They said they were made to work for 18-20 hours every day, often subject to brutal beatings by their employers, not paid any wages for the last three months and not provided any housing facility.

“We lived in a small hut where rainwater seeped in. We were forced to work beyond duty hours, abused and thrashed,” narrated a rescued labourer.

In Delhi the National Campaign Committee for Eradication of Bonded Labour (NCCEBL), an umbrella organisation comprised of activists, human rights groups, trade union leaders, students and civil society organisations working to eradicate bonded labour, was also contacted and with colleagues in ActionAid Association’s National Office, helped the rescue operations. All 17 rescued labourers have now received release certificates from the district administration and have been safely repatriated to their homes in UP. Immediate support in terms of food and transportation, were provided to them.

The state of Uttar Pradesh is both a source and a destination for bonded labour. The main causes behind the origin, growth and perpetuation of bonded la­bour system are both economic and social in nature. The economic reasons include extreme poverty, inabil­ity to find sustainable sources of livelihood, landlessness or inadequate size of landholdings, and natural calamities like droughts, floods etc. that push vulnerable communities into bonded labour. The social reasons, on the other hand, include caste-based discrimination, huge expenses incurred on occasions such as the birth of a child, marriage, death etc. thereby leading to heavy debts, lack of concrete social welfare schemes to safeguard against hunger and illness, and lack of effective implementation of several welfare schemes.

Bonded labour is a blot on our society and a clear violation of human rights. As part of its efforts towards the elimination of trafficking and all forms of forced labour, ActionAid Association is strongly advocating for the registration of migrant workers at the level of the source village in order to monitor their movement and follow up on their well-being after they migrate to the destination sites. Besides, the state government’s Labour Department should form an inter-state migrants’ committee to keep a check on migration and provide support to workers in case of any emergency. In addition, proper rehabilitation of labourers should be ensured as per the provisions of Central Sector Scheme for Rehabilitation of Bonded Labourers.