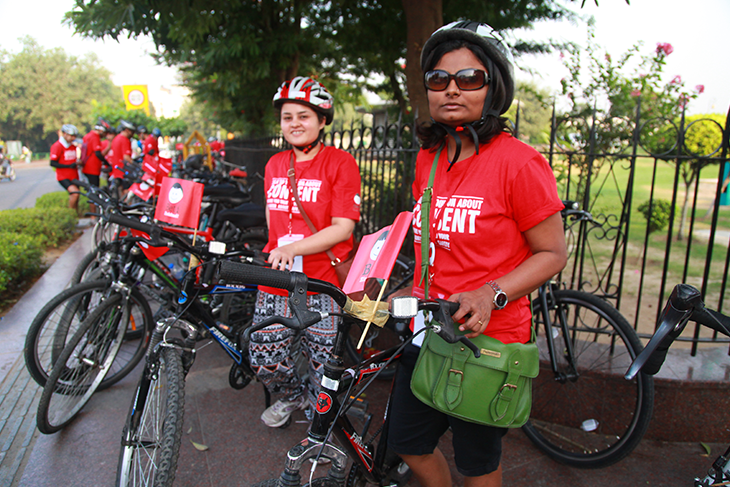 ‘Safe Cities for Women’, a campaign for gender-responsive public services, has been launched by young women across several cities of India. As we celebrate women’s protagonism, it is important to keep pushing for greater gender justice.

Empowering women is critical to ensuring healthier and happier families, empowered communities and a sustainable future for all. As we celebrate women’s protagonism, it is important to keep pushing for greater gender justice. ‘Safe Cities for Women’, a campaign for gender-responsive public services, has been launched by young women across several cities of India. Women’s collectives in these cities conducted community-led safety audit processes and submitted issues that came up, to authorities in their respective cities and states.

In Hyderabad, ‘Run for Her’, a marathon marked the launch of the Safe Cities campaign on the eve of International Women’s Day. Nearly 400 young women from 15 bastis of the city participated, with college students and working women joining in solidarity.

In Guwahati, women held a meeting to spread awareness about the Women Helpline Service and gender-based violence. They also discussed linkages with the National Urban Livelihood Mission and women’s self-help groups for sustainable livelihood opportunities.

In Patna, young women met with the ward councillor, asking for streetlights and cleanliness in and around their localities. Another group of women met with urban primary health centre staff to discuss health services in the city. They also met Mr. Niraj Kumar, the local MLA; Mr. Chandrashekhar Singh, the DM of Patna; Ms. Rajni Devi Patna, the Deputy Mayor, Patna; and ward councillors, Ms. Sharda Devi and Ms. Pinki Kumari. With all these officials, they discussed issues concerning women’s safety in Patna.

In Kolkata, women submitted a list of suggestions for a safe city to the Deputy Commissioner of the Crime against Women unit and other officials of Kolkata Police at Hastings police station. They also met Mr. Goutam Kr Roy, the Secretary of District Legal Services Authority, and many local councillors to speak about the issues of women’s safety in Kolkata.

In Delhi, young women organised meetings and cultural programmes to promote the concept of a safe city.

Not just in cities, women held meetings in rural areas across several states with police departments, with Social Welfare and Health Departments and with their elected representatives to raise the challenges faced by women and girls. In Uttar Pradesh, across 50 districts, women organised more than 7,000 meetings to talk about various issues, including biases and barriers that exist for women and girls that in turn prevent them from pursuing their dreams. In Uttarakhand, women’s collectives from five districts shared demands emerging from among community women with the concerned government officials. A campaign on social security titled ‘Sarkari Yojna, Samajik Suraksha, Sab Haq Hamara’ was launched across several districts of Delhi NCR, Haryana, Himachal Pradesh and Punjab to support women’s access to social security. In Dabhoi in Vadodara, Gujarat, 170 women agricultural labourers and labourers at risk of becoming bonded came together for a meeting focusing on minimum wages and safety at workplace. The programme also saw the participation of representatives from Nari Adalat, Police Suraksha Setu, 181 Abhayam Helpline and Kanuni Salah Kendra. Participants submitted a list of suggestions to the concerned DM, SDM and Labour Commissioner. In Kurnool, Andhra Pradesh, 50 unorganised women workers held an interface meeting with the officials of Mission for Elimination of Poverty in Municipal Areas (MEPMA). These were women undergoing a tailoring training programme. During the meet, MEPMA officials spoke about loans and other beneficial schemes that could support the livelihoods of women workers.

An exhibition-cum-sale was organised in Dimapur, Nagaland, to showcase the products developed by various women’s collectives under ActionAid Association’s livelihood regeneration programme. A total of 167 women from marginalised groups in Peren, Dimapur and Kohima districts have already received support for farming, weaving, mushroom houses, crafts and food processing.

ActionAid Association strives to be a feminist organisation, engaging with women to build their leadership and agency through a range of initiatives across the length and breadth of the country. These include home-based workers, those who work as domestic workers, beedi workers, fish-workers and agricultural workers. ActionAid Association has supported these groups’ collective enterprises – for farming, horticulture, nursery raising dairy, mushroom cultivation, sanitary pad-making, jewellery-making etc. While economic empowerment of women is the immediate goal, it is the goal of sustainable futures that lies at the centre of all these initiatives.

These are women who are making a difference in their own lives and that of their families, and the larger communities they live in. The world owes its well-being to such women. Concerted efforts, targeted strategies and efforts to change attitudes and break existing biases are the need of the hour. Investment into care work and care jobs will significantly support women and girls who can study and pursue their other interests. All-round efforts to create an enabling environment for women and girls will take us closer to gender equality and the well-being of society as a whole. As we celebrate women’s agency, we need to continue working towards creating a better world for women and girls and all of humanity.

We are delighted that this International Women’s Day, Ms. Vandana Burder, working with ActionAid Association, was felicitated by Sh. Talasani Srinivas, the Honourable Minister for Fisheries, Government of Telangana, with the highest service award for working on women’s empowerment. In Rajasthan, ActionAid Association’s work with out-of-school girls was applauded by the district administration of Barmer. Our teams have been successful in linking 4,500 girls to schools. Similarly, in Odisha, Chairperson, Odisha State Commission for Protection of Child Rights, Ms. Sandhyabati joined other state-level dignitaries to celebrate local community women’s initiative supported by ActionAid Association towards building leadership of women and girls who are today confident protagonists challenging stereotypes and overcoming barriers. The District Magistrate of Hyderabad felicitated two young activists.

Disclaimer: The article was originally published on Outlook. The views expressed in the article are the author’s and do not necessarily reflect those of ActionAid Association.