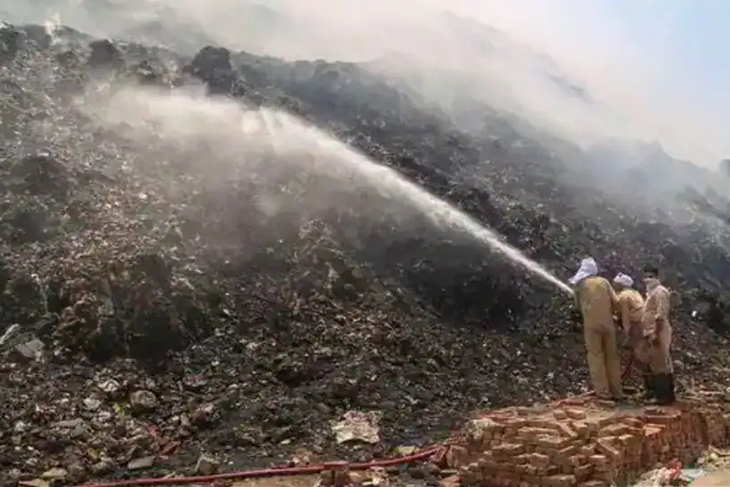 The Qutub Minar is an iconic image representing Delhi. However, three mountains of garbage may better reflect what we have done to our city in modern times. With the decommissioned Okhla landfill at the height of 40 meters, the Bhalswa landfill at 54 meters, and the Ghazipur landfill at 56 meters, these compete with the 72-meter tall Qutub Minar in terms of height. And now they burn also!

The Bhalswa landfill site, which caught fire more than a week ago, still has garbage in flames. A month ago, the Ghazipur landfill, the largest landfill site in Delhi, caught fire, not once but thrice.

In October 2021, a collapse at the Ghazipur landfill killed two and injured five people.

Delhi is burning and drowning in its garbage. However, the recent fire at the Perungudi dump yard in Chennai shows that garbage disposal is not a problem that Delhi faces alone. True, the record-breaking heatwave conditions engulfing north and north-west India with the temperature soaring above 40C+ are making matters worse, but we need to do something about urban waste.

Municipal waste management is emerging as one of the biggest challenges for urban centers. As per theManual on Municipal Solid Waste Management, developed by the Central Public Health and Environmental Engineering Organisation, India generated 1,43,449 tonnes of urban waste per day from 2014 to 2015. Approximately 80% was collected, while only 22% was processed or treated. The manual concluded, “segregation at source, collection, transportation, treatment, and scientific disposal of waste was largely insufficient, leading to the degradation of the environment and poor quality of life.”

Cities are engines of growth, and they see a massive influx of people every year who come to cities to better their prospects. The 2011 Census shows that 31% of the population of India lived in cities, and by 2050, it is projected that the figure will be 50%. In the face of the scale of this growth, the problem of waste disposal requires attention on a war footing. It is not only the quantity of waste but also its composition which is a matter of grave concern. E-waste, plastic waste, and bio-medical waste are on the rise, and this is either non-bio-degradable or a medical hazard.

In 2016, the Ministry of Environment, Forests, and Climate Change released a series of notifications about managing different categories of waste and further revised some of these guidelines in 2020. Furthermore, in 2019, the Prime Minister launched the “Say No To Plastic” campaign, calling for an end to single-use plastic. While all of this constitutes significant movement towards making cities clean and healthy, however attainment of this goal still proves elusive.

Cities need to provide a clean, liveable and healthy environment to all their inhabitants. We have several waste management models before us, many successfully implemented across several cities in India. For example, the “zero landfills” model of Ambikapur (Chhattisgarh), Chandrapur (Maharashtra), and Taliparamba (Kerala) have ensured that almost 100% of waste is segregated at the source and all recyclables are extracted, which are then sent for recycling to relevant channels. These measures have ensured that these urban areas generate very little waste and have no rising landfills. The report titled“Waste-Wise Cities”produced by the Centre for Science and Environment and the NITI Aayog documents successful waste management models across 28 cities. Such models need to be scaled up and adopted or adapted by all towns. The Swachh Bharat Mission and other flagship programs of the central government, such as the AMRUT and Smart Cities program, provide the overall framework for making all this possible. Further, “The City We Need Now” campaign of the UN-Habitat, has called for a focus on health and well-being, safety and security, housing and other services, economic opportunities for all, culture, resilience, inclusion and gender equality, governance, urban planning, and design and innovation.

As declared in the United NationsNew Urban Agenda, “the battle for a more sustainable future will be won or lost in cities.” Therefore, all the state and non-state actors need to come together to achieve the Sustainable Development Goal 11 of green, resilient, safe, healthy, inclusive, sustainable, and well-planned cities.

ActionAid Association’s engagements with informal workers who make life in the city comfortable for all while remaining under-served and deprived of the “right to the city” tell us about the ecological services they provide to urban areas. These include the rag-pickers segregating the waste and selling recyclable items to the market. A recent National Geographic article states that the informal sector is mainly responsible for India’s high recycling rate. India recycles about 60 percent of its waste, compared to the U.S., which recycles less than 30 percent of its overall trash and just nine percent of plastic. Unfortunately, in India, young girls, boys, women, and men are engaged in this activity. Some of them live near these landfills. All suffer occupational health issues as they have no protective gear and earn abysmally low incomes.

We need to recognize the work of these CityMakers and engage them more fully in scientific waste management processes while ensuring dignified and safe work. The future for all of us will only be secure if our cities provide life and hope for all! And for that, the time to act is now!

Disclaimer: The article was originally published on Dailyhunt. The views expressed in the article are the author’s and do not necessarily reflect those of ActionAid Association.