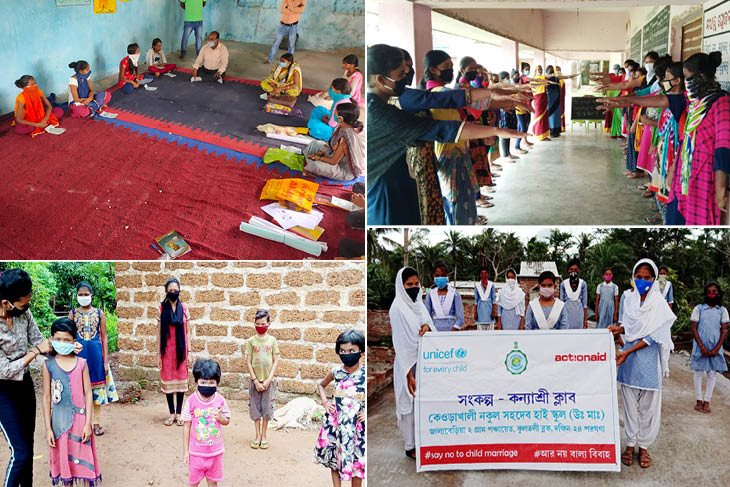 Child marriage persists in India amidst child protection laws. Protecting children from this menace needs multipronged tactics besides breaking false beliefs. India has a high prevalence of child marriage with at least one in three child brides in the world being from this country. The Prohibition of Child Marriage Act 2006 declares that a marriage before the legal age of 18 for girls and 21 for boys is punishable.  Statistics show that child marriage in India has been declining. The National Family Health Survey Series 4 (NFHS-4) carried out in 2015-16 records that 27% of women aged 20-24 years were married before the age of 18 years, while in the NFHS-3 data of 2005-06 the corresponding figure was 47.4% – a significant drop. However, the NFHS-4 shows that states like West Bengal with 44% women married before 18 years age, Bihar (42%) and Jharkhand (39%) continue to show alarmingly high incidents of child marriage.

As part of our overall mission of advancing child rights, ActionAid Association and its allied organisations have been working on the ground to prevent child marriages in various states. Over the years we have explored a number of approaches to protect children from early marriage.


“Say No to Child Marriage – Yes to school”

The loss of opportunity in education has a harmful impact on children. Children staying in school and continuing their studies is not only a human right but an important tool for empowering girls.  Child marriage denies girls their right to health, childhood, opportunity to attend school and to choose their own future.

Recently ActionAid has initiated a campaign “Say No to child marriage-Yes to school”. The idea of this campaign, involving school students, teachers, support staff and volunteers, is to build awareness and solidarity.  The campaign is supported by school headmasters, district level government authorities and Department of Women Empowerment and ICDS.

Programmes empowering adolescents and ending child marriage have been implemented across five states in India – Rajasthan, Odisha, West Bengal, Bihar, and Jharkhand. 52 most vulnerable districts are covered in this initiative.

Youth as agents of change

We aim to equip young people as agents of change to break the intergeneration cycle of poverty.  Enabling them to address the issue of child marriage will tackle the broader issues of adolescents such as their health, aspirations, and opportunities in life.

Engaging with the State

Child protection systems are the bedrock to prevent child marriage. They mitigate risks that heighten vulnerabilities for children and adolescents. Hence, we engage with the state systems including Justice, police, health, and education. We influence them to be more responsive and accessible to end child marriage and to empower adolescents. Strengthening all components of the relevant government systems have thus become our focus.  This includes laws, policies and standards, human and financial resources, research, and data collection.
Monitoring and strengthening flagship programmes such as the Rashtriya Kishor Swasthya Karyakram (RKSK) and Integrated Child Protection System (ICPS) are also key to ensuring effective impact of the campaign. The proper functioning of bodies such as the Juvenile Justice Board, Child Welfare Committee and Child Care Institutions under ICPS will thus become more accountable to the poor and young people from vulnerable communities.

Our achievements with the support of UNICEF

During COVID-19 lockdown 15-year-old Koel (name changed) was rescued from marriage with due support from parents, local sarpanch, police and block development officer.  Our ally Jan Lok Kalyan Vikas Parishad helped this operation to be successful.  Now Koel is pursuing her studies in class 9.

Protecting children from child marriage is not possible unless all stakeholders – government, educational institutions, community organizations including youth and child clubs – join and work collectively.  You and I being part of wider community are called to join this venture. Our mission is to see child marriage free India where every child has a happy childhood, good education and a say in every decision that affects them.