On the 25th October, I was lucky enough to attend a debate on manual scavenging by 23 students from all across Delhi, as part of ActionAid India’s #TalkingShit campaign. The topic being discussed was: ‘Professionalisation of sanitation workers will lead to the elimination of manual scavenging and the stigmas attached to it’. It was my third day at ActionAid, and an incredible introduction to an issue that I had heard very little about in the United Kingdom, from where I come. The students’ speeches were all filled with ardor for social change, and I found it utterly inspiring as well as educational. I found myself wishing my Hindi was good enough to fully understand the speeches of the winner and first runner up, who both spoke with a fiery passion that moved me even with my limited grasp of the language.

The debate gave a fascinating insight into the much wider and more long-term issue of dangerous sanitation practice in India. Despite the prohibition of manual scavenging since 1993, the practice is still incredibly prevalent. In the past three months, the death of 39 manual scavengers has led to a particular rise in awareness of the dangers of the practice, and the dire need for alternatives.

Manual Scavengers in India are vulnerable to a host of diseases and infections. They are exposed on a daily basis to harmful gases such as hydrogen sulfide, methane, ammonia and carbon monoxide, as well as infections like Hepatitis A, which is easily vaccinated against. A dire lack of protective equipment and safe procedures makes fatalities an unacceptably regular occurrence. To get a wider picture of the alternatives, I analysed safety practices for sanitation workers in India and elsewhere in the world.

Advisory leaflets provided by the UK government’s Health and Safety Executive for workers handling sewage cover everything from proper safety measures to avoiding exposure to waste altogether. According to HSE, exposure to sewage should be eliminated or minimised by, for example, ‘remote-controlled robotic cameras for sewer inspection’, and drying or incinerating sludge before disposal. When manual work is necessary, it should be with ‘proper instruction, training and supervision’, and protective gear. Sewage ‘flushers’ in London, for example, are provided with disposable protective suits, and showers at their workplace. Harmful gases, one of the most common causes of fatal incidents in India, are effectively avoided by ventilation systems. Workers are never further than a few hundred meters from an access point, and are provided with emergency air bags that last up to an hour.

In Maputo, Mozambique, on the other hand, effective waste management has become an impressive community initiative. It is now almost exclusively undertaken by forward-thinking local entrepreneurs, who use protective equipment and mechanized ‘gulpers’ to pump faecal sludge. They take the waste to local sewage treatment plants, which are made up of ponds and plants that filter the water at several stages before it flows to the sea.

In this way, rural communities have discovered a solution that empowers small businesses while keeping neighborhoods clean and drastically reducing disease and contamination.

In India itself, there are stories of hope in the sanitation field. East Kolkata’s organic sewage treatment system operates on a much larger scale than Maputo’s; in fact, it is the largest in the world. The wetlands were innovated by locals more than a century ago, and now function as a vegetable garden and fishery that supply more than a half of the city’s daily requirement. In what seems like a win-win situation, the wetlands slash the prices of vegetables and fish while ridding the city of its waste-water at zero cost.

Instead of being built upon, however, the success of the farmers and fisherpeople of the wetlands is now being hindered by the massive growth of the real estate industry. Dhrubajyoti Ghosh, Special Advisor to the International Union for Conservation of Nature and the foremost authority on the Kolkata wetlands, urges “we need to take steps to bolster and encourage the processes that strengthen the wetlands rather than raise roadblocks.” Direct Initiative for Social and Health Action (DISHA) an ActionAid ally in West Bengal, are engaged on a much wider scale in the struggle for fisher people’s rights.Their advocacy for the fisher community is ongoing, and their petition to the National Green Tribunal has drawn much needed attention to the insufficient supply of waste water.

These are three diverse examples of what good sanitation practice looks like. Both across the world and closer to home, communities and individuals are coming up with innovative and forward-thinking alternatives to manual scavenging and unsanitary fecal sludge management. These change-makers should be empowered by the authorities to continue revolutionising waste management and – most importantly – supported, recognised and reimbursed for their work.

Manual scavenging is a dehumanising and dangerous practice, which has no place in modern India. At a minimum, regulations on sanitation work must be enforced and workers made aware of their rights. But a look at this range of community-led entrepreneurship, from Mozambique to Kolkata, also suggests a much brighter future for sanitation work, in which those working towards a cleaner India are no longer relegated to the bottom of society. Instead, they’ll be at the forefront of positive change, and recognised and rewarded for their work on what is one of the most pressing issues facing India today. 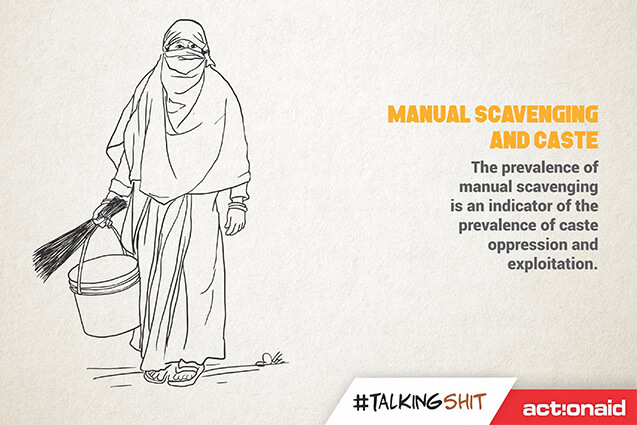