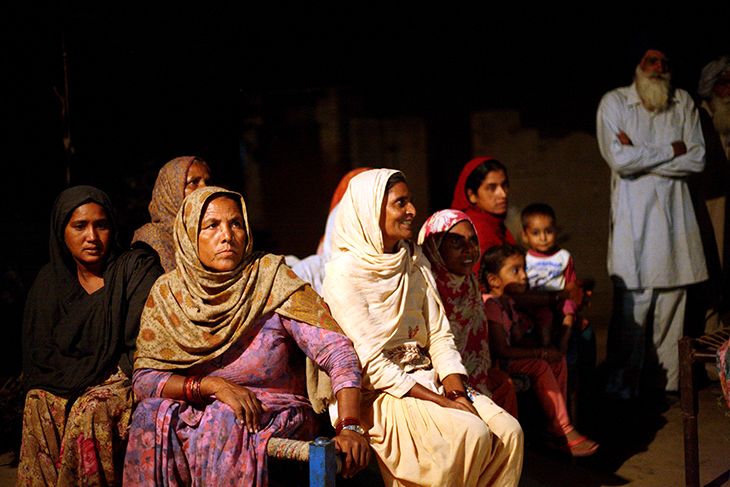 “Microfinance companies are breaking our backs.  Many women in our block have taken loans that they can’t repay.  During COVID, these loans have swelled up, and the company agents threaten us, take away our belongings, our gas cylinders.  I know women whose husbands have become “siri” (bonded labour) to repay the loans.  We need loan write-offs.  We need work.”

I was speaking with Gurmeet Kaur, a Dalit activist.  We were both attending the Gulami Mukti Mela, organized to celebrate the memory of Jai Singhji, the founder of Volunteers of Social Justice (VSJ) , who had died last year.  Gurmeet Kaur is a member of Dalit Dastan Virodhi Andolana (DDVA) and the MGNREGA Workers Union.  These are organizations carrying on the work of putting an end to bonded labour and ending caste and gender discrimination.

Gurmeet’s words underscore how caste, landlessness, and extreme economic precarities have made landless agricultural workers subject to severe forms of exploitation and oppression.  The census of 2011 reported that 68.89 per cent of agricultural workers are Dalits.  The majority of the remainder come from backward castes and other marginal sections.  In Punjab, the promise of land reforms and land to the tiller has remained nothing but a historical lie.

Land in Punjab is concentrated in the hands of landlords, and Jat Sikhs dominate this segment.  As per the Agriculture Census of 2015-16, only 3.5 per cent of private farmland belongs to members of Dalit communities.  A 2017 Amendment of the 1972 Punjab Land Ceiling Act now allows for exemptions of land ceilings for commercial and industrial purposes through a simple process enabling subversion of land ceilings and conversion of land to non-agricultural usage.  This amendment has further weakened the already low commitment for redistributing ceiling surplus land to the landless rural workforce.  Most Dalits families work on other people’s land, and several thousand do so in conditions of bondage and neo-bondage.

Reports that had appeared last year about farmers and workers clashing on wages seem to be re-occurring this year.  However, with complete disregard to the minimum wage pronouncements of the Government of Punjab, farmers in several villages have got together this year, as they did in 2021, to fix wage caps and issue diktats against non-compliance and threats to workers.

The Government of Punjab seems to be turning a blind eye to these moves by farmers and is looking at ways to reduce their wage bill by introducing labour-saving devices and providing incentives to farmers to adopt them.

Ironically, on the eve of International Workers Day, the Government of Punjab announced that it would financially incentivize direct seeding of rice or “Seedhi Bijai”.  Through this process, seeds are sown directly in the fields, and transplantation of seedlings grown from water bedded nurseries is not required. Instead, it can be done with the aid of machines which drill seeds, significantly reducing manual effort and saving water.

While the said policy was initially announced in 2020, this year, an incentive of Rs 1,500 per acre is being given.  Last year, field trials and adoption by some farmers indicated that seedhi bijai saved 20-25% on crop water requirements and reduced labour needed by 20-25 persons per hectare.  It is estimated that farmers will be able to save up to Rs 3,000 per acre, and the process would reduce the depletion of groundwater and worsening of soil conditions. However, while farmers are coming together to demand even higher incentives and protections, agricultural workers have resisted.  In many villages, seedhi bijai is making the situation tense and faceoffs have been reported.

The extreme precarities faced by agricultural workers force many into debt bondage.  In addition to such debt relationships, the last few years have seen the rise of private microfinance. Microfinance Institute Network, an RBI-appointed regulator, reported that in Punjab, by the end of September 2020, the number of women borrowers had swelled up to 12.88 lakhs with an outstanding principal amount of Rs 4,387 crores. Activists of DDVA from Ferozpur, Fazilka and Muktsar districts report several instances of the kind Gurmeet Kaur described – of agents from microfinance companies threatening legal action and taking away belongings from the houses of workers in debt.  The activists confirmed reports of men becoming “siri” or bonded labour to pay back their debts.

In the immediate instance, both the workers and farmers need a protectionist state and social support.  For the workers, it is critical to assure income guarantees.  Labour losses are seldom quantified.  This need to be estimated rapidly in this instance – and for the number of workdays and wages lost due to such a transition to Direct Seeding of Rice, workers must be compensated fully at certainly no less than minimum wage rates.  Pending wages of MGNREGA need to be paid, and MGNREGA expanded to 200 days per year.  The MGNREGA Workers Union of Punjab has long been demanding it.

Direct seeding of rice may be a long-term measure to conserve water, but such saving is certainly not going to give any relief to those who are condemned to drink contaminated water even in the medium term. The crisis faced by farmers and workers in the countryside of Punjab is a common one and cannot be their shared fate.  It is the crisis that needs redress in policy and action.

Disclaimer: The article was originally published on Outlook. The views expressed in the article are the author’s and do not necessarily reflect those of ActionAid Association.