Bhadrachalam is a pilgrimage town in the Khamam district of Andhra Pradesh. Last month (July), owing to heavy monsoon showers, the area witnessed terrible flooding that had caused extensive damage in the area.

The deluge, triggered by the River Godavari, has so far affected more than 3000 people in 130 villages.

In the first week of the floods, the officials and the local politicians were quick to respond to the situation. This was between 19th and the 23rd of July 2013. The water levels in Godavari, at this point, had reached a staggering 58 feet.

There was a reason for this swift reaction, locals say.

The local elections were scheduled on 23rd of July and parties were head over heels in offering their support, one of them tells me.

The government, I was told, deployed helicopters for rescue efforts and also supplied food, water, milk and bread.

By the 31st of July, the panchayat elections were over. At this point, the water levels in Godavarirose to 61.7 feet,  threat imminent. The second deluge struck the villages between 1st August and the 6th of August, severely affecting the tribal inhabited villages in the area. However, contrary to what was playing out a week earlier, nobody came for the villagers rescue this time, allegedly.

As per the news reports, 20,000 houses were submerged and 100,000 acres of crops destroyed. Official reports confirmed 28 deaths and 46 pairs of livestock as missing.

On the morning of 7th of August, Mr. V. Gandibabu, Director of Agriculture and Social Development Society (ASDS) and I reached the area, to take stock of the situation and plan our response efforts accordingly.Through ASDS, our allied organisation, we have been working in three mandals of Bhadrachalam for many years now.

To deal with grief is a difficult thing – but when you set out for a stock taking exercise in a flood affected area, largely inhabited by poor people, you are bound to come across heart-wrenching stories. In a way, I was prepared for that.  But what greeted us in the morning were not just the terrible accounts of losses, but also a complete apathy and indignity that these people had to face from the local officials.

According to the flood manuals and procedures, it is the duty of the government to provide all necessary services to the flood victims. It is their job to keep a track on the stock of food grains, rice, red grams, kerosene etc, to meet the needs of the affected people. And they are supposed to assess this by visiting them and spending time with them.

I was personally witness to a situation when a group of officials landed at the area on a boat with the relief items (only water pockets and tarpaulins). Comfortably seated on the roof tops, they shouted orders to tribal boys, whose job was to pick those items and carry it back, on their heads. Have a look at this picture here. 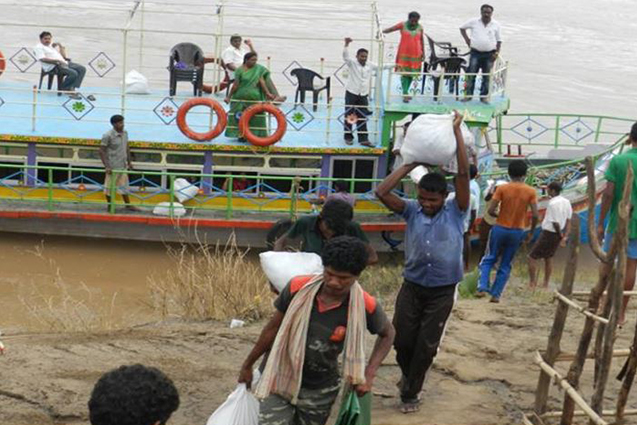 Not one of them, and I am not exaggerating here, came down from the rooftops. All that they spent here was 20 minutes, panning their heads leftward and rightward – their way of ‘assessing’ maybe!

Remember, these were a group of officials who were visiting the area five days after the second bout of floods had struck.

That delay apart, when they finally arrived in droves, neither did they come down from their high heavens, nor did they spend any time inquiring about the extent of damage – while it is their job to do that!

They were throwing rice bags and water packets at us in utter disregard, one of the tribals complained about the scene. What are we? Cattles?, he was obviously agitated.

The villagers are angry that none of them, not even the concerned officer who was in the boat, inquired about the damaged schools and clinics.

If this is how they are doing their assessment of the area, I wonder if any truth would come out in their reports, complained an old frail woman, unable to hold back her tears.

It is disheartening to see such apathy being shown towards a group of people who are already disadvantaged by a calamity.

These are people who are now facing a complete loss of land and livelihood.

It is these ‘ assessment reports’ that you submit back, which can turn their despair into hope. The least that you can do is to take that job seriously and show some empathy.

Or is that so difficult to come by?

(Views expressed by the author are personal and do not represent the views of the organisation. You can write to the author at Karthik.Navayan@actionaid.org)

FOOTNOTE: ActionAid India and our local partner ASDS (Agriculture and social development society) is trying to address the immediate needs of flood affected tribals, the children and women in particular . We are also helping the affected people in approaching the government and all concerned state departments to ensure proper relief and rehabilitation.