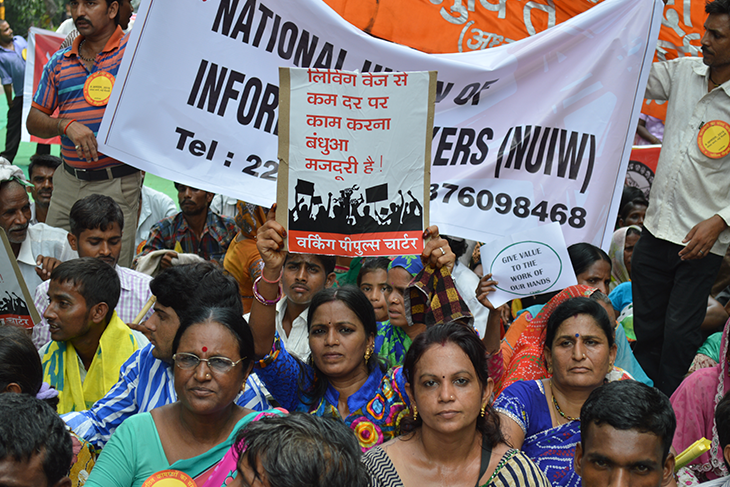 At 8:57 am on 24th April 2013, the Rana Plaza building in Dhaka, Bangladesh, collapsed, killing more than eleven hundred people. The building housed several garment factories supplying brands like Prada, Gucci, and Mango. The world was shocked. The disaster exposed labour conditions at the different levels of the global garment value chains. The public outcry forced many international brands to re-evaluate their labour and human rights standards. However, nothing much seems to have changed on the ground even nine years after the incident.

The fire at a commercial building in Mundka, in Delhi on 13th May 2022 that led to 27 deaths amongst workers in a CCTV manufacturing and packaging unit is not an isolated statistic in India’s list of workplace accidents.

In the days following the Mundka deaths, a salt factory wall in Gujarat collapsed, killing 12 workers, including four children. The same day, two migrant workers died in Bangalore, forced to continue working in the underground pipeline during heavy rains. Ten construction workers succumbed to death a few days later, as they were trapped when an under-construction tunnel collapsed in Jammu and Kashmir. The year 2022 started with the death of four workers in a fire-cracker factory in Sivakasi, Tamil Nadu, on 1st January. In the same month, six workers died due to a gas leak at a chemical plant in Surat, Gujarat. Then on March, 11 migrant workers from Bihar were killed after a fire broke out at a godown in Secunderabad, Telangana.

To this sad litany, which tragically does not seem to be ending, we must add the gas leak at the Union Carbide factory in Bhopal at midnight on 3rd December 1984 – considered the world’s worst industrial disaster.

Why do workers continue to work in such precarious conditions? The simple answer is the alternative is starvation. Labour rights, working conditions and social security standards remain abysmally low in most countries of the Global South. Wages are minimal, and workers live in extreme and rising precarity. As per the ILO, the share of workers in national income has kept falling since the 1990s, although labour productivity has been on the rise. Moreover, with rising distress in agriculture, the reserve armies of informal workers have kept swelling, and the bargaining power of labour is at an all-time low.

The PLFS 2019-20 report released by the NSSO states that only 22.9% of the Indian workforce had regular wages or salaries. Another quarter worked as casual labour, and more than half were self-employed. Even among those who had regular wages or employment, the report states that 67.3% had no written contracts, 52.3% were not eligible for paid leave, and any social security scheme did not cover 54.2%. The percentage of those not covered under any social security scheme has risen by almost 5%, from 49.6% in 2017-18. Since the report predates the pandemic, for the most part, one can only assume the present has much larger figures.

India is known to have a progressive legal framework protecting workers’ rights. However, the record shows that implementation has never worked in favour of labour. This record seems to be maintained as both Union and State Governments in India take significant initiatives to make India an industrial manufacturing hub. As per information provided by the Union Ministry of Labour and Employment to the Parliament last year, from 2014 to 2018, more than 5,600 people died in factory settings. However, many trade unions and workers’ organisations have called this highly under-reported. In addition, many deaths due to workplace accidents are reported differently due to various legal provisions.

A cause of concern related to India’s patchy workplace safety record is the race to the bottom among India’s states to attract private investments – both foreign and domestic. In 2015, the Government of Maharashtra introduced an official order that stated that specific factories and establishments could self-certify their compliance related to labour and other workplace regulatory standards. This was done to simplify the conduct of business, and several other state governments have now followed this model. In April and May 2020, several states diluted their labour law regulations, all in the hope ‘to bring economic activity back on track post the lockdown’. It is hardly surprising that weeks later, in July 2020, it was reported that 75 people were killed and several others injured in around 30 industrial accidents since the lockdown was implemented. A production system dependent on waivers and relaxations to attract capital investments cannot ever incentivise the protection of workers’ rights, wages and living standards.

The Occupational Safety, Health (OSH) and Working Conditions Code, 2020, like all other new Labour Codes, are still to be implemented even several months after enactment as none of the states of India have released the required rules. While there are gaps in the current labour laws, additional delays in finalising rules have led to severe denials of workers’ rights, including deaths of workers. However, it is to be noted that although the new OSH Code is yet to be implemented, similar regulations have been in place for a long time. Therefore, India needs better implementation and compliance with existing and new regulations. Moreover, even the 2020 OSH Code requires amendments as it gives the appropriate government the power to exempt any establishment for a certain period.

Further, it enables the state governments to exempt any new factory from its provision to create more economic activity and employment. Many of the workplace accidents mentioned above involve the death of migrant workers, who face additional precarity due to their migration status and the ambiguous role of the contractor. The OSH Code should also be amended to include the duties and responsibilities of the contractors of inter-state workers to ensure their accountability.

As citizens of India, we need to shed our romance with “ease of doing business” rankings. We must shun the practice of issuing vacuous statements after every accident bemoaning how that specific manufacturing unit lacked regulatory clearance. Instead, we must urge focused action to ensure that every workplace maintains standards and safety. We need to urge both Union and State Governments to comply with regulatory standards and not provide exemptions for short-term economic gains. We need to hold employers accountable for the lack of regulatory standards in the workplace. India also needs to ratify the ILO Convention 155 – Occupational Safety and Health, 1981.

Disclaimer: The article was originally published on Dailyhunt. The views expressed in the article are the author’s and do not necessarily reflect those of ActionAid Association.