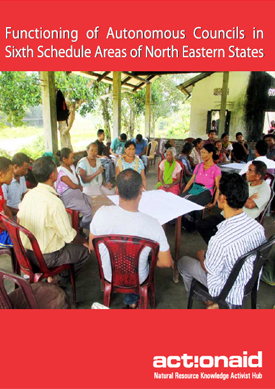 The setting up of District Autonomous Councils is arguably one of the most crucial structural changes in tribal area administration towards promoting social, cultural and political autonomy to the people in tribal areas of Assam, Meghalaya, Tripura and Mizoram. While the people in sixth schedule areas enjoy autonomy in their administration, tribal people in fifth schedule area covering nine states are struggling for implementation of the Provision of Panchayat Extension to Schedule Act (PPESA) 1996 since the last two decades. Although PPESA provides lot of opportunity for tribal people to exercise their traditional customary laws and practices, it has not been fulfilled till date. On the other hand, albeit with limitations and flaws, the functioning of autonomous councils has been effective to protect traditional governance systems. One of the major objectives of this study is to explore how the autonomous councils function so lessons can be learnt for application in fifth schedule areas to give people greater and more effective autonomy. The present study has explored various aspects of the functioning of district autonomous councils in different sixth schedule areas. It has looked at both the achievements and drawbacks of DACs and studies the functioning at different levels. The report has also suggested changes needed for more effective administration under DACs.