SINGLE YES, BUT NOT ALONE 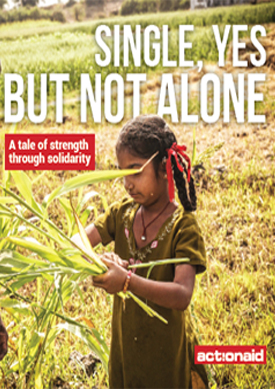 ActionAid has been working with single women for around two decades now, organising and empowering them for claiming their rights and entitlements. ActionAid’s initial understanding on the plight of single women emerged out of its humanitarian intervention in response to the Super Cyclone in 1999 in Jagatsinghpur, Odisha, and then the 2001 Gujarat quake. It is in Gujarat that we deepened our work with single women. ‘Sneh Samuday’ (Caring Community) were formed as disaster response collective, whose initial objective was to protect the rights of the most vulnerable – children without adult protection, single women, disabled people and the elderly abandoned. The Samuday ensured rehabilitation by strengthening their capacity to care within communities and also to access rights, including State relief. Over time the Ekal Nari Shakti Manch evolved out of the Samuday focusing on single women. In the years to come, the Manch played a critical role in the formation of a national-level organisation, i.e. the National Forum for Single Women’s Rights. Today, this Forum is a formidable force, influencing national policies in favor of single women, and having influenced policy on the 12th Plan and the National Policy for Women — 2016. This report attempts to capture the long journey that the Manch has travelled ever since it was born… the journey that was full of challenges and also achievements… with single women and for single women!