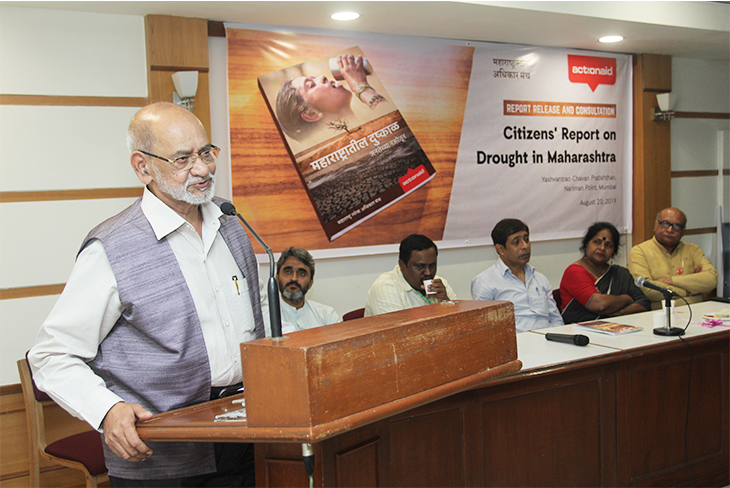 Several parts of Maharashtra have been facing frequent droughts in the recent years, with their severity increasing year after year. In order to understand drought better and to look at its various aspects and causes from the perspectives of local communities, nearly 350 civil society organizations from the state came together and held consultations over the last one year and a half in regions that are worst affected by drought, namely Western Maharashtra, Konkan, North Maharashtra, Marathwada and Vidarbha. Organized with a view to also formulating measures – both immediate and long-term – to combat drought, these meetings saw active participation of farmers, agricultural workers and other marginalized groups, besides activists and academics. Based on the observations, learnings and people’s voices emerging out of these consultative processes, ActionAid Association, along with Maharashtra Lok Adhikar Manch, put together a Citizens’ Report on Drought in Maharashtra. Besides containing updates from the regional consultations, the report carries several articles contributed by activists and experts on the issues of water, agriculture and drought.

The report presents a comprehensive analysis of the persistent drought scenario in the state and suggests measures to combat it. It was released on the occasion of a state-level consultation on drought organized by us on August 20 in Mumbai, Maharashtra. The consultation was attended by nearly 50 people, including agriculture and environment experts, academics, researchers, journalists, activists and representatives from civil society organizations. Rich discussions took place on the state-specific realities of drought, and experiences and learnings shared with Mr. Avinash Mahatekar, Honourable Minister of State for Social Justice and Special Assistance, Government of Maharashtra, who was present on the occasion. At the meeting, it was decided that more and more people and concerned stakeholders, including policy-makers, would be engaged in the process of furthering the efforts towards exploring solutions on the matter.