A report on the National Consultation on Land Rights, Bhopal

“When we the labouring people will demand of this world our share,

It we will not just be one field, one farm, we will demand the whole world”

“We seek to bring together different questions of land – land to landless, especially Dalits, forest lands to tribals, the commons. We seek to build a strategy to bring the question of land rights and land reforms back on the political agenda, ” said Rajkumar Sinha of the National Alliance of People’s Movements while welcoming participants to the two day National Consultation on Land Rights organised in Bhopal on 15-15th April 2019 by Jan Pahel and ActionAid Association on 14th – 15th April 2019.

Land reforms have not been effectively implemented due with strong political will and commitment. The question of village commons and grazing land also requires focus as lack of access has put fishing, cattle farming and animal husbandry in dire circumstances. It can be argued that the unresolved issue of land rights lies at the base of the agricultural crisis in India.

Ensuring access to land to women of rural land in India is one of the most significant steps that would enhance rural livelihoods in India. From a legislative standpoint, the equalization of land rights for rural women appears a straightforward task, but it calls for focused legislation, policy and schemes. There is a need to work towards protection, reclamation, access, and redistribution of land to the women of marginalized communities, primarily Dalit, tribal, fishing and Muslim communities.

The land rights consultation saw rich discussions on the need to bring land reform on the national and state agenda as a tool to provide land to the landless, the need to use the Forest Rights Act to ensure access to community forest rights to tribal and non-tribal forest dwellers and protect against land alienation and protection and promotion of the commons for all, the need to protect and promote land rights of women and the need to take stock of land distributed and allotted by State Governments to Dalits and tribal people. Finally the consultation had discussions towards creating a strategy for a national land rights campaign.

What follows are highlights of what the speakers had to say on the occasion.

“We need to see land rights in the context of the architecture of macro-economic policies. We are in a post-manufacturing world. From the early 1980s to now we have doubled the growth rate and the rate of employment growth has gone negative minus 1.6%. We see two modes of dealing with agriculture massive protection and massive assault. In developed countries we see massive protection of agriculture, in developing countries we see a massive attack on agriculture. The subsidy on a single cow in the west is more than the annual income of a rural household in India. Developed countries want to dominate the world with their agriculture.

“Thinking of land without natural resources will be a non-starter. We also need to address macro-economic policies that are pushing people out of agriculture. The Swaminathan Report is a very substantial report and is a good starting point to create policies that can resolve the agricultural crisis, including for land reforms. There are many economists who are growth fundamentalists, we need more livelihood and employment fundamentalists.” Prof. Praveen Jha, JNU 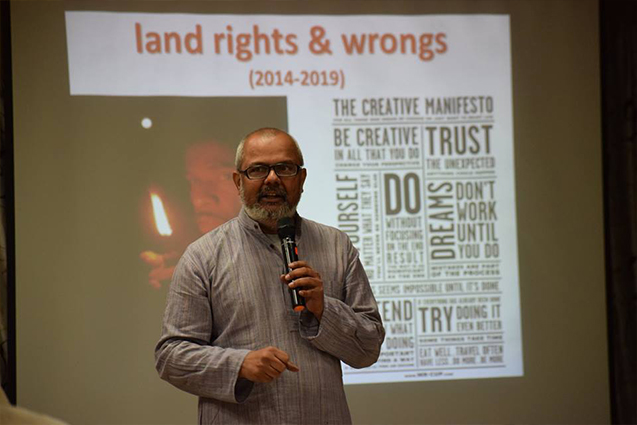 “Land rights in law has been reduced to a rarely raised political slogan and in execution to a never made political choice. The last few years have seen slow implementation of land distribution and almost 90% approval of land acquisition project, the pitting people-centric legislation such as Forest Rights act (FRA) against the institution-centric Compensatory Afforestation Fund Management and Planning Authority (CAMPA) law. The question of land rights in India is like a game of snake and ladders, biased against the landless. Even if they gain a little land there are many other laws that deprive them of the land. In the last five years 8.5 lakh hectares were lost due to infrastructural projects, around 70,000 on forestry projects and 2.9 lakh hectares were lost due to urban development. Less than 10% of the amount of lost land was distributed to the landless and that too mostly through the Forest Rights Act. The situation today is that broadly speaking at least half of the village is deprived of land rights.” Ramesh Sharma, Ekta Parishad. 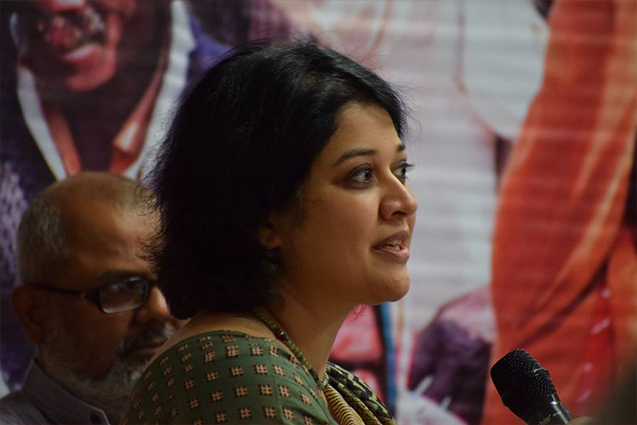 “Secure tenure is a point seen in all documents which speak about mitigation and prevention in the context of climate change. We need to safeguard against the state playing the game of divide and rule between conservationist groups and rights group. We need to build wider coalitions.” Dr Rohini Chaturvedi, researcher 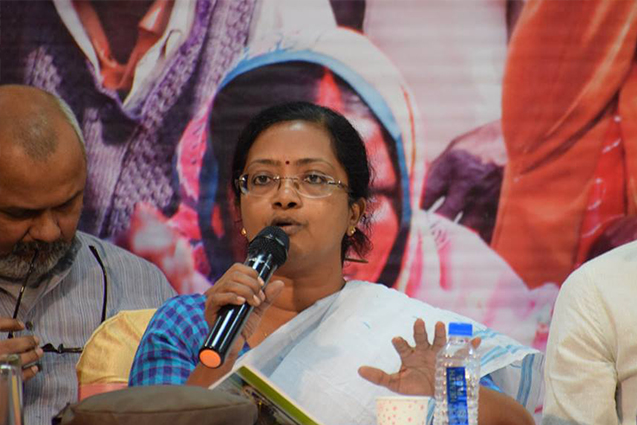 “In Kerala, especially in the Kuttanad area, agriculture was made possible because of back breaking labour, under conditions of near slavery and caste oppression. However land reforms saw tenants getting land rights, bypassing the landless labour.”

“There is need to create a holistic political perspective and pressure groups which have not just impacted populations but wider groups who come together on the issue of justice.” Yamuna Sanni, researcher. 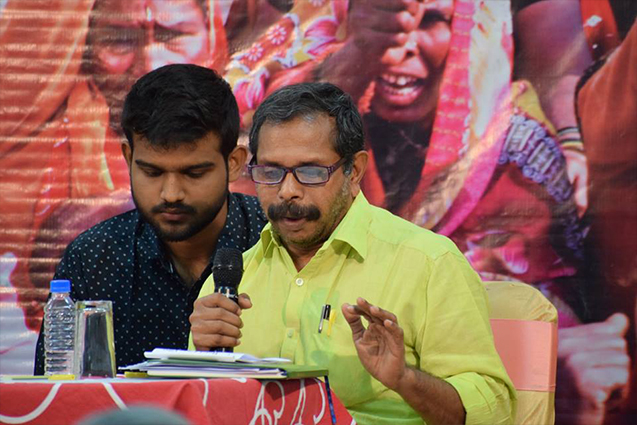 “The Government of Kerala has control of 10 lakh acres of ceiling surplus land. However it has only distributed 60,000 acres of land. There is need to ensure distribution of ceiling surplus land to landless. In Kerala there is also an issue of 2 lakh acres at 32 different locations in the possession of Harrisons Malayalam Ltd. even after expiry of the lease. Landless farmers have reclaimed 2,000 acres as part of a land rights movement.” Suresh George, land rights activist. 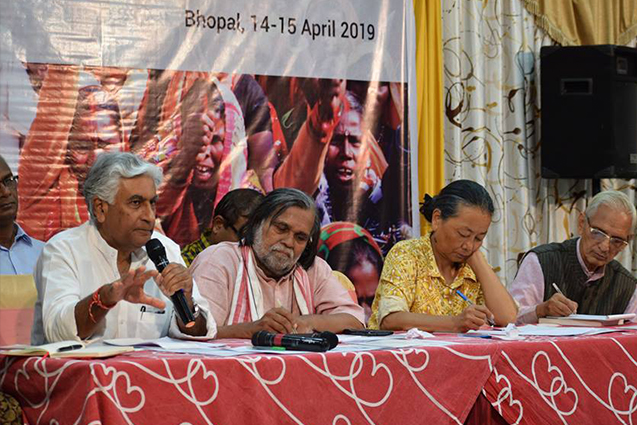 “The Forest Department has given thousands of hectares to corporates, why does it not give forest land to tribals under Forest Rights Act. I have worked to get “Orange land” which is land disputed and claimed by both the Revenue and the Forest Departments, mapped and utilized for the benefit of people. The departments are not releasing this data.” KK Singh, former MLA, Madhya Pradesh. 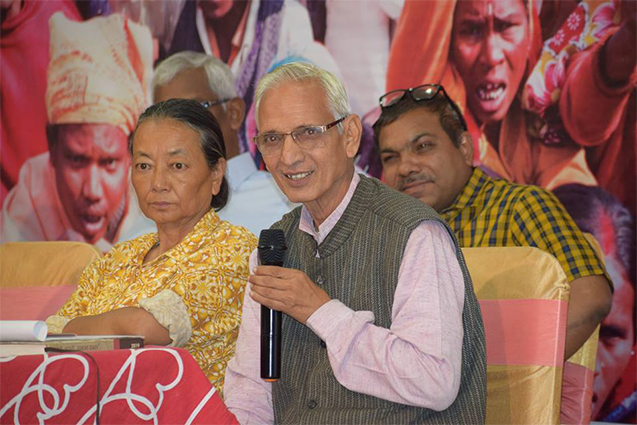 “Bertrand Russell said that there were three issues faced by “man” – “man” with self, “man” with “man” and “man” against nature. If he was alive today Russell would recognize the most important issue is “man” against the State. The State had taken on all power to serve the vulnerable and deprived. But now the control of the State is in the hands of big corporates. And the State is not working for the benefit of the deprived and vulnerable people. We need to recognize that the V Schedule, the VI Schedule and Article 370 are windows to direct democracy. In fact all village councils should ask for village swaraj.” Ashok Chaudhary, Adivasi Ekta Parishad. 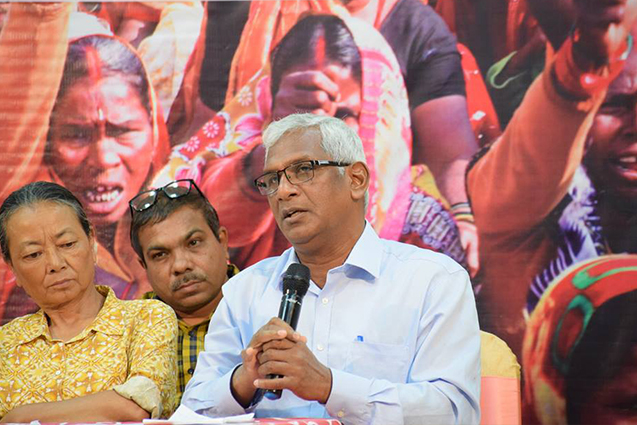 “There is an abundance of laws and policies but little or ineffective implementation. Adivasi communities had better ways of managing natural resources in their traditional ways. The management of the State and administration has made things worse.” Nicholas Barla, tribal activist 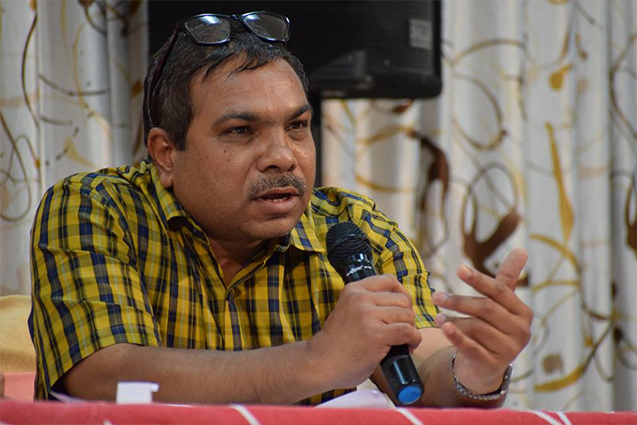 “We need to recognize that within tribal societies the concept of individual rights works against tribal culture, especially community feeling and collective action.” Devjit Nandi of Navrachna Samaj Sevi Sanstha 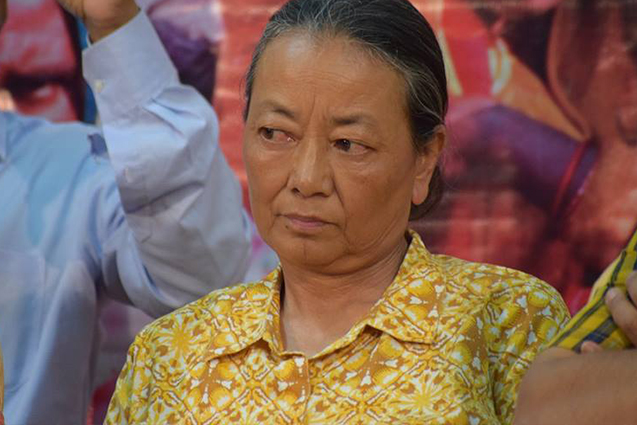 “We need to speak about what it means to be a tribal and what is our world view. While we are asking for self-governance we should see the example of the North-East States. We have tribals ruling at the State level and we have village councils with great autonomy, however the type of development being followed is no different from what is happening in the rest of the country. We also have significant degree of landlessness.” Linda Chhakchhuak, journalist and activist. 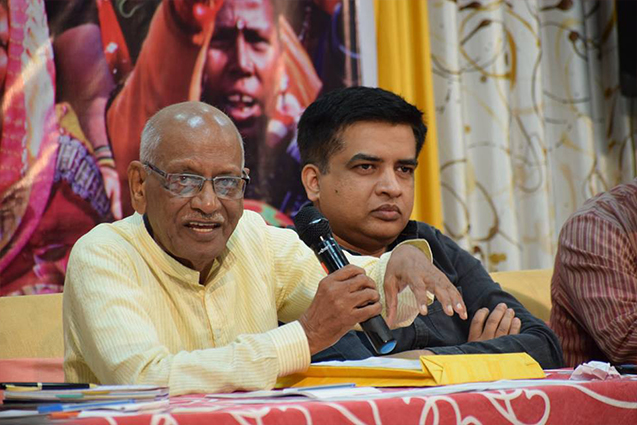 “Historically excluded communities and nomadic tribes and de-notified tribes (NTDNT) are around 13 crores. 54% are people who cannot get an identity – they are not citizens but denizens. Not only are they not considered as citizens and ignored, their traditional life and occupations are made criminal through the Beggary Act and Wildlife Protection Act. The living conditions of these communities have deteriorated. Many of these communities had been notified under the Criminal Tribes Act set up by the British. This law was withdrawn after independence and the tribes were denotified, however the training courses of the police still treat them as “criminal” tribes. In the current situation where mob lynching has become prevalent more than 90% of the people affected are from these communities. Across the States in Independent India village councils have passed resolutions that these communities are not a member of the village. These communities require a comprehensive package – land, housing, livelihood, education. Partial policies and schemes do not suit their needs. In a situation where farmers are committing suicide, when offered land NTDNT communities have asked me should we take land so we can commit suicide. The strategy to secure land rights for NTDNT community is not just to focus on land but also speak about means of livelihood, training, support till NTDNT communities can transition to a new way of life. They need train in sustainable farming. ” Bal Krishna Renke, former Chairperson, National Commission for Denotified, Nomadic and Semi-Nomadic Tribes (NCDNSNT) 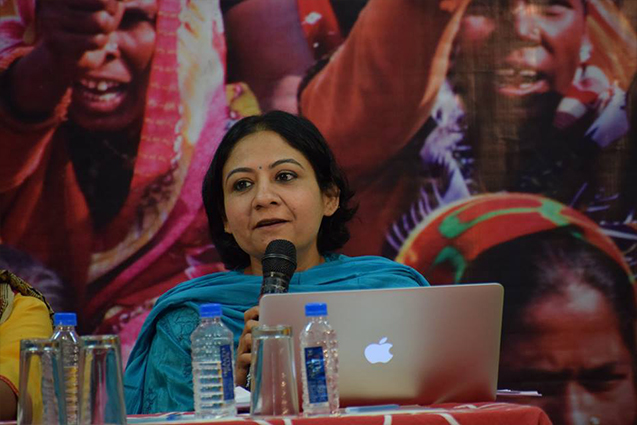 “Land is not only necessary for economic empowerment but also for the reduction of violence against women, the wealth and nutrition of the family, the security of landholding and the quality of land. Women should not be reduced to custodians of land, they should be made owners and become decision makers, not just because of their ongoing and inextricable contribution, but because not ensuring their access and control over land is a violation of their basic human rights.” Sarika Sinha, activist and researcher. 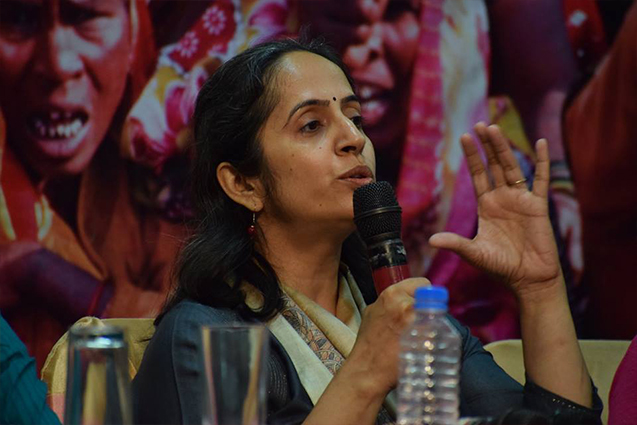 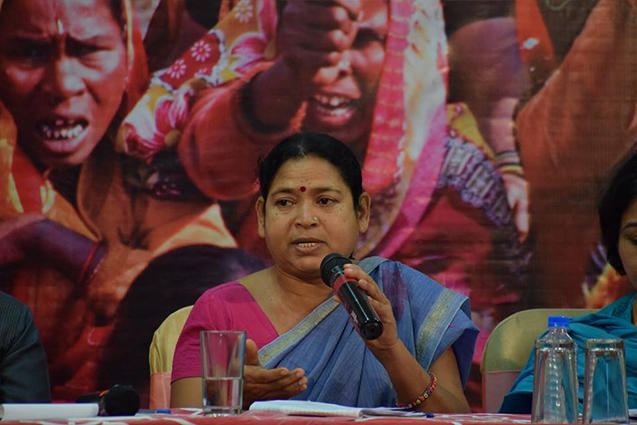 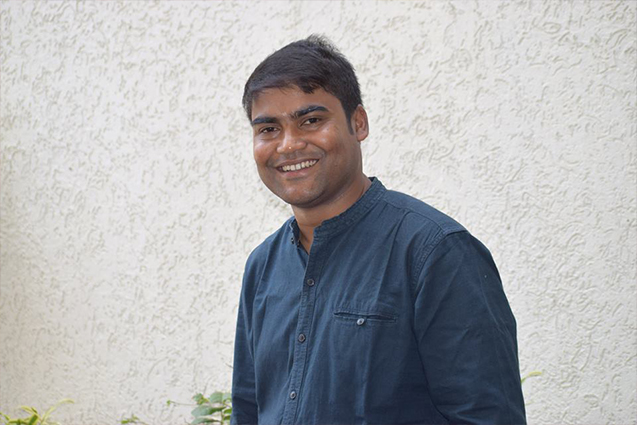 “Land rights of fisherfolk community are not secure. There are many areas where traditionally fisherfolk communities would dry their fish, build docks for their boats and store their equipment and mend their nets, market their fish. We had these traditional rights but recently these rights have been denied.” Debashish Samal, Dakshin Banga Matsyajibi Forum. 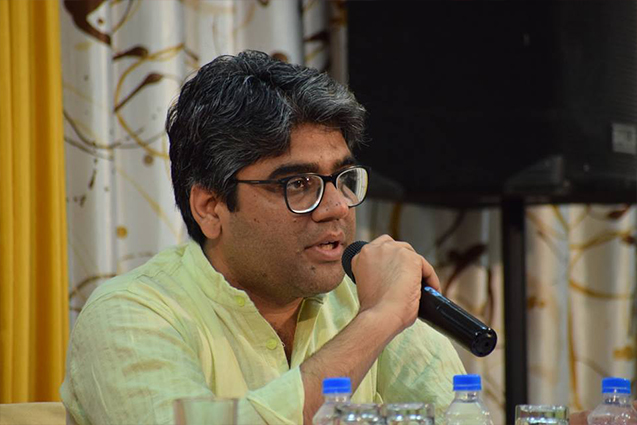 “The greatest challenge to the current development strategy will be caused by the consolidation of land in the hands of corporates or big farms, the push on people to leave agriculture and the creation of a huge population which does not have a place in villages or in cities. We need to recognize that the land question is not just a livelihood question it is a question of citizenship and identity.” Prof Sudhir Kumar Suthar, JNU 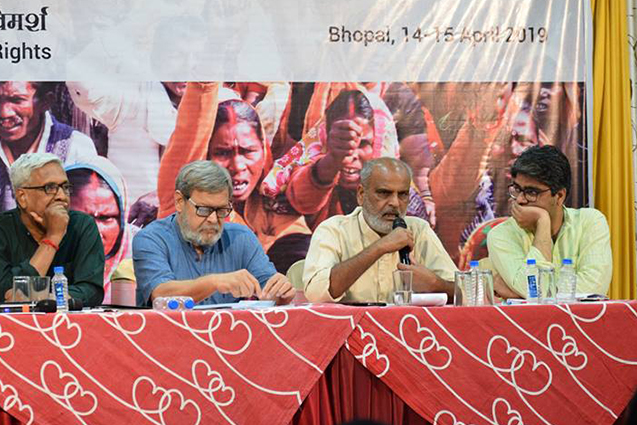 “Industrial projects have been set up with the acquisition of land from farmers. The ecological impact of these industrial projects have also impacted surrounding agricultural lands. We need to fight against these processes and also the thinking that promotes development that benefits the few at the cost of many.” Umesh Tiwari, advocate and social activist 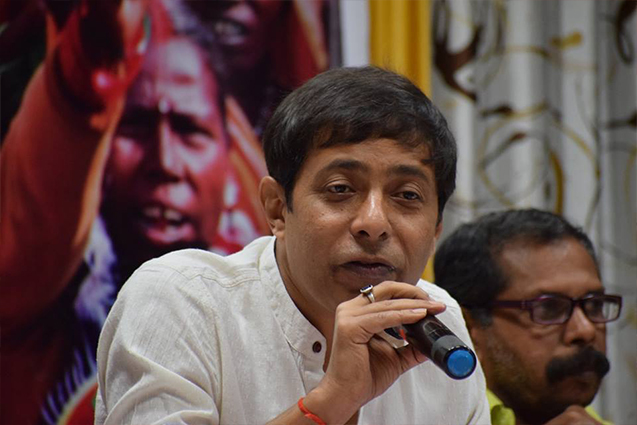 “The land question can be seen in three aspects. First the issue of land reforms and land rights of the landless, where the focus has shifted from the issue of agricultural land to homestead land. We need to see how we can achieve success on the issue of homestead land and bring the question of rights to agricultural land back on the political agenda. The second aspect is the agricultural crisis which is pushing people from agriculture and leaving them without land, livelihood or employment. And finally the question of land grab which is impacting tribal communities and the urban poor in cities. Peoples’ movements and organisations and all solidarity groups need to build strategies to deal with all aspects of the land question.” Sandeep Chachra, ActionAid India