Single, But Not Alone 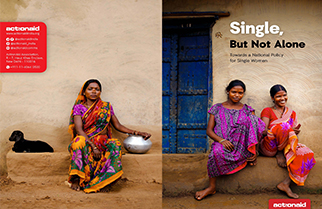 ActionAid Association has been working with single women for over two decades now, working together to build collectives of single women and enabling them to claim their rights and entitlements. For AAA an understanding of the vulnerabilities and the issues faced by single women came from the humanitarian work conducted during the Super Cyclone in Jagatsinghpur, Odisha in 1999 and as a response to the earthquake Gujarat in 2001. AAA interventions in Gujarat saw for the first time a focussed effort to protect the rights of single women as one of the most vulnerable groups, in a time of heightened vulnerability. This happened through the efforts of the disaster response team, Sneh Samuday, during and immediately following the disaster, to strengthen vulnerable groups’ access to rights and relief provided by the State Government. The Sneh Samuday’s continuing work with single women saw the creation of the Ekal Nari Shakti Manch, which played a critical role in the formation of the National Forum for Single Women’s Rights, which has been working to influence policy on single women. It is from the experiences of the collectives, the organisations and the national forum that the draft policy for single women draws its insights.