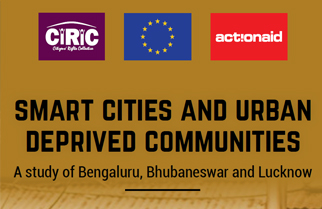 A study of Bengaluru, Bhubaneswar and Lucknow

Cities are viewed by many millions with hope for the future. Across the Global South vast swathes of people are being pushed out of agriculture and will continue to move to cities to look for the possibilities of work there. The influx of large populations into urban areas across the globe has resulted in a billion plus people living in squatter settlements, without basic facilities and services, in a life of insecurity, fear and indignity. Urbanisation of this kind has posed severe sustainability challenges on all fronts, and giving rise to deep speculations, contests and uncertainties about the fate of cities and urbanity. Urban futures where the spectre of majorities of populations squeezed up in neglected corners, in what are called slums and tenements, and numeric minorities living in sprawling, large, green spaces, raises nightmares of inequalities.

ActionAid Association has for many years now recognized the importance of working on urban issues from the viewpoint of the common citizens, whose voices and interests should take priority in policies governing the city. In India the rights of the urban homeless were one of earliest focus areas we took up in the urban context. We worked with the homeless community and also in the realm of policy. Our work over the decades has educated us about the importance of combining grounded interventions aimed at building the protagonism of vulnerable communities, with policy interventions to ensure rights of vulnerable communities are recognized at the highest level.