Tales of The Streets Told by its Children 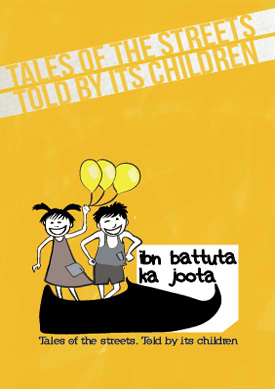 Ibn Battutta Ka Joota is a campaign that seeks to make adifference for street children. The name of the campaign is inspired from poet Sarveshwar Dayal Saxena’s popular children’s rhyme by the same name. Ibn Battutta is said to be the world’s greatest traveller and thus epitomizes the situation forced upon street children in a positive way. Ibn Battuta Ka Joota seeks to activate the passive spectator amongst us into an advocate for street children. It seeks to turn our focus back to these children and their lives and highlight their aspirations and desires. It is an attempt to bring out stories of street children in a collaborative way, where any one of us can become a storyteller. It is only when we start listening to street children and talking about them that action can be taken to secure their rights.