Humanitarian response to emergencies in 2018 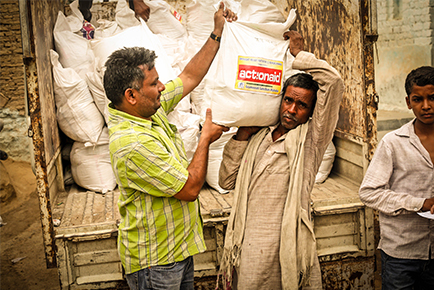 2018 was witness to several natural disasters in the country. Floods, cyclones and drought – we saw it all happen – Kerala saw the worst floods hitting it in almost a century; the states of Tamil Nadu and Odisha had to bear the brunt of devastating cyclones, Gaja and Titli respectively; the Kodagu District in Karnataka saw devastating floods and the consequent havoc; Maharashtra, on the other hand, saw a bad drought and continues to reel under it. Across all these calamities, ActionAid India teams have been there on the ground and responding, providing humanitarian relief to the communities affected.

Recognizing that emergency situations affect vulnerable communities disproportionately, we focus our efforts on people living in poverty and exclusion, and amongst them women, children, the elderly and persons with disability (PwDs). Our response to emergencies seeks to ensure community-led responses that promote the dignity of the affected communities; remains committed to a long-term response while providing immediate relief; and works with proven processes of accountability and transparency to all stakeholders, including the communities we serve.

The floods and landslides that hit Kerala in August caused unimaginable loss of life and property. Responding to these catastrophic floods, ActionAid India’s humanitarian response team, with support from volunteers and several allies, almost immediately conducted a rapid needs-assessment in four districts, namely Idukki, Wayanad, Pathanamthitta and Alappuzha. Subsequently, we were able to reach out to more than 2,200 families from the worst-affected communities with dry rations, mattresses and bed sheets, shelter repair support, saris for women, sanitation, hygiene and dignity kits, water purifiers, and educational materials for children. Besides, with long-term recovery in mind, we also assessed the rehabilitation needs of the most vulnerable families, and designed and implemented cash-for-work programmes for projects involving cleaning of homes and agricultural lands, and carrying out of housing repairs.

Cyclone Gaja, that hit the state of Tamil Nadu in November, brought about widespread destruction in the districts of Nagapattinam, Thiruvarur, Thanjavur and Pudukottai, causing extensive damage to houses, crops, fishing gears and livelihoods. Responding to this cyclonic storm, ActionAid India, along with its allies – Legal Aid to Women Trust (LAW Trust) and Sneha – has, so far, reached out to nearly 500 most vulnerable families in Nagapattinam and Thiruvarur with dry rations and utensils. Considering that there is also a need for long-term support, we will be standing with the affected communities to help rebuild shelters, livelihoods and other community infrastructure.

In the aftermath of Cyclone Titli in Odisha, ActionAid India, with support from its allies – Centre for Community Development (CCD) and Society for the Welfare of Weaker Sections (SWWS) – has, so far, reached out to nearly 700 families in Gosani and Rayagada blocks of Gajapati district with food items and fleece blankets. In addition, keeping in view the multiple vulnerabilities faced by PwDs, support in the form of kitchen garden kits is being provided to their families, besides providing educational kits to their children. As part of our intervention, we also facilitated the formation of emergency response committees in 25 villages across the two blocks, ensuring due representation of all marginalized groups. In addition, members of the district-level network of PwDs and district-level women’s federation are being mobilized to lead the emergency response and carry out campaigns on the ground to help communities access the government entitlements. We are pleased to share that CCD and SWWS have recently been recognized by the state government for their relief efforts for PwDs.

With support from Persistent Foundation, ActionAid India also responded to the floods in Karnataka’s worst-hit district, Kodagu; dry ration kits were provided to 150 families in the remote village of Haleri.

In Maharashtra’s Aurangabad and Jalna districts, with support from Siemens India under its ASHA initiative, ActionAid India has been running a programme since 2013 to improve communities’ resilience to drought. Recognizing that drought is a complex phenomenon with linkages to multiple ecological and social processes, we are implementing solutions to drought in both the short term and the long term, ensuring people’s participation and building community leadership in these programmes. Besides working towards ensuring water security by developing micro-watersheds, we are promoting alternative livelihood options involving small-scale farmers and local communities. We are happy to share that this programme recently received international recognition. At the Siemens Business Meet – 2018 in Berlin, Germany, this drought mitigation initiative won the Werner von Siemens Award 2018.

ActionAid India’s rehabilitation efforts to support communities affected by the floods that hit Tamil Nadu in 2015 still continue. This year, with support from Cipla Foundation, we were able to reach out to 30 families of women or children with disability. While 25 families were provided flood-resilient, disability-friendly houses in Tuticorin and Kancheepuram districts, 5 families were provided livelihood support in the form of bunker shops. Besides, assistive devices were provided to those in need.

Continuing our long-term engagement in Odisha with the communities affected by Cyclone Phailin in 2013 in Ganjam District and the Super Cyclone in 1999 in Jagatsinghpur District, we organized Disaster Risk Reduction (DRR) Trainings for women leaders from these districts with support from Motorola Solutions Foundation. As part of this initiative, more than 1,100 women were trained in disaster preparedness.