Musahars assert their right to land, work and social security 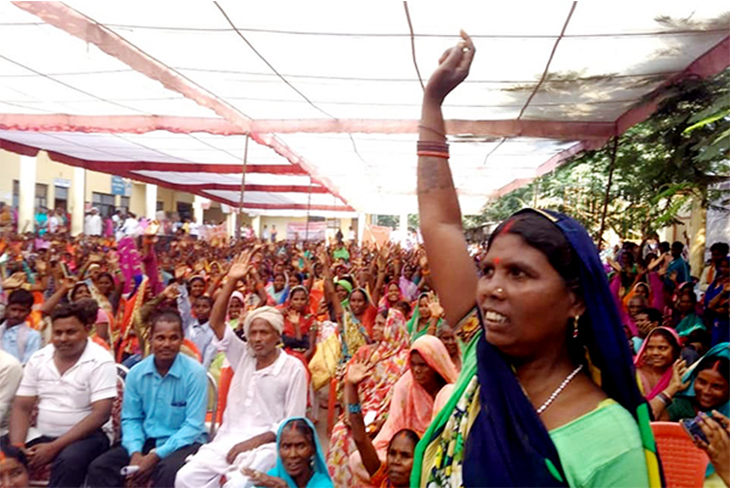 On October 24, more than 1,500 people, majority of them women, gathered for a maha sammelan in Tamkuhi Raj tehsil of Kushinagar district, Uttar Pradesh, to highlight the issues faced by Musahar and other marginalized communities in the district. Organized by Musahar Manch with support from ActionAid Association, this public meeting also saw the participation of Sh. Swami Prasad Maurya, Cabinet Minister, Labour & Employment, Government of Uttar Pradesh; and Sh. Ganga Singh Kushwaha, MLA, Fazilnagar, Kushinagar, besides officials from the Revenue and Labour Departments. Musahar Manch, a community-based platform formed with our support almost a decade ago, has been helping Musahars, one of the most marginalized Dalit communities, in their struggle to access rights and entitlements.

During this maha sammelan, community leaders brought up the issue of landlessness among Musahar communities and stressed the need for land titles for both agricultural and homestead land. Furthermore, raising the issues pertaining to work and social security faced by unorganized workers from these communities, the community leaders also called for the active registration of these workers under Building and Other Construction Workers Board (BOCW Board) of Labour Department, Government of UP.

You would be pleased to learn that during this public meeting, land titles – for agriculture as well as housing – were distributed to 18 most marginalized families. “Land is our life. It will help us earn a livelihood and live a life of dignity,” said an elated Shakuntala Devi upon receiving the land patta. While addressing the gathering, Honourable Minister, Sh. Swami Prasad Maurya, assured the Musahar community about government’s commitment towards ensuring the rights and entitlements of Musahars. At the meeting, he also announced that village-level camps would be organized across the district to identify landless families so that they can subsequently be provided land pattas. In addition, camps for the registration of informal workers under BOCW Board would be organized across villages, he stated.