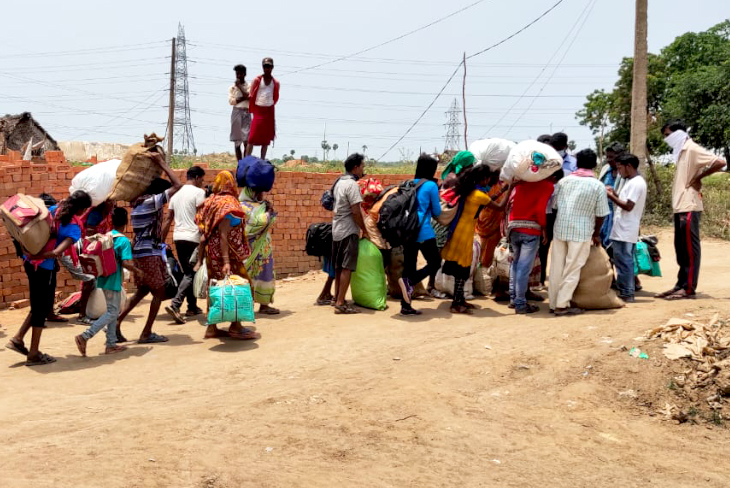 The COVID-19 pandemic and consequent crisis has laid bare the multi-layered vulnerabilities, deprivation and exploitation faced by people dependent on the informal economy. At the same time, heart-warming instances of solidarity have also come to light. One such story is that of the role of online volunteers with our Activate programme in the rescue of nearly 355 workers from Odisha who were working at a brick-kiln in Pudukuppam village of Thiruvallur district, Tamil Nadu. These online volunteers were helping the ActionAid Association team in Tamil Nadu communicate with migrant workers who spoke a variety of languages, but not Tamil or English, which was what our colleagues and ground teams knew. Online volunteers would facilitate a three-way conversation, speaking with migrant workers on the mobile phone and communicating their needs to our teams, and in turn conveying instructions and information from our teams to the migrant workers in need.

In the wake of the COVID-19 crisis, when the Shramik Special Trains started running, the workers at the brick-kiln expressed their desire to return to their native places. Hearing this, the brick-kiln owner not only denied them the permission to return but also brutally assaulted nearly ten of those labourers.

As soon as this incident came to the notice of our team on the ground, our volunteers who knew Odia contacted these labourers and enquired about their condition. Subsequently, our team informed the State Relief Commisioner who assured to immediately inform the District Collector. Also, the team roped in the district revenue officials – RDO, Deputy Director, Rural Development who were at the spot the next morning. In the meantime, our allies communicated to the office of the Labour Commissioner, Odisha, about the incident. Medical assistance was thereafter made available to those injured and police officers deployed at the site to avoid anything untoward.

Upon further interaction, our volunteers learnt that the pay these workers were receiving was not even close to the minimum wage, with some getting as low as Rs. 50-100 a week. Moreover, since the time they started working at this site last year, their stay was kept confined to in and around the kiln and they were never allowed to go back to their villages. We are pleased to share that the police have registered an FIR against the brick-kiln owner and are proceeding to take action. You would be happy to learn that these workers have now reached home safely. Our Tamil Nadu regional office continues to extend solidarity to migrant workers by sending yet another batch of 44 workers jointly with the district administration around Pollachi area of Coimbatore district to Madhya Pradesh and Odisha on May 22, 2020. The online volunteers continue to support our colleagues to overcome the language barrier.