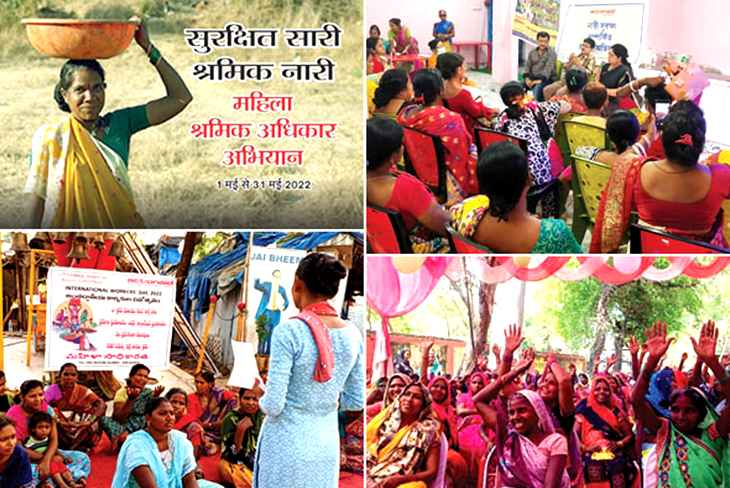 On the occasion of International Workers’ Day on May 1, ActionAid Association facilitated awareness-building programmes and community meetings for unorganised workers across several states on their rights and entitlements. In Bagda block of North 24 Parganas, West Bengal, nearly 100 women workers came together to raise the issues they face in the world of work. We also facilitated their interaction with journalists from reputed media houses. Participants discussed media’s role in highlighting workers’ wide-ranging issues. At a programme organised in Sikharchandi Nagar in Bhubaneswar, Odisha, with Centre for Child and Women Development (CCWD), we celebrated the workers’ agency and their enormous contributions. The gathering discussed workers’ rights to minimum wages, social security and dignity.

We held awareness camps for informal women workers across several locations in Hyderabad, Telangana. Scores of domestic workers, construction workers, street vendors and daily wage workers participated in learning about workers’ rights. A month-long helpdesk was also run in the city. Workers reported and sought support on wages, working conditions, access to social security entitlements and harassment. In Tamil Nadu, marginalised women living in relocation sites of Semmancherry and Perumbakkam, who we had provided livelihood support, called for their recognition as labourers. The saltpan workers in Tuticorin voiced their demands as well on the occasion.

Awareness-building meetings on labour laws were held for unorganised workers across several districts of Uttar Pradesh, namely Ambedkar Nagar, Baghpat, Ballia, Bijnor, Faizabad, Ghazipur, Jaunpur, Kushinagar, Muzaffarnagar, Pratapgarh, Saharanpur, Shamli, Sonbhadra and Varanasi. Challenges faced by workers, including regarding wages and working conditions, were discussed in detail, with a particular focus on women workers’ issues. Besides, a month-long campaign was started at the labour adda (labour post) in Lucknow on workers’ rights. We organised a similar meeting with informal labourers in Dabhoi in Vadodara, Gujarat.

Workers’ Day also marked the culmination of our ‘Azad Mazdoor, Poori Mazdoori’ campaign running in Jalandhar, Punjab and in Raisen, Madhya Pradesh. Several programmes with unorganised workers’ collectives were held on the occasion. This initiative, launched on Ambedkar Jayanti on April 14, campaigned to end all forms of forced and bonded labour. In Bhopal, we launched ‘Surakshit Sari Shramik Nari’, a campaign for women workers. In addition, we ran a hotline with the Gauravi One-Stop Crisis Centre where women facing challenges at the workplace could call for support.