Nandini, a young soft-spoken woman in her mid twenties, could not hide her delight when she grabbed the mic from the organiser and announced,

“Yes. We had a baby girl and I must be the happiest person on this planet today”.

It was a very emotionally charged moment for all of us who had gathered around her in that narrow alley, to sing songs , distribute sweets and celebrate the birth of a girl in her family less than 60 days ago. Nandini was indeed on cloud number nine. So were we.

The scene is from ‘Beti Utsav’, a community celebration at Bharat Vihar area of Dwarka, New Delhi. It is a festive gathering of community members who come together, every three months, to celebrate the birth of girls in their neighbourhood.

Given that Delhi is notorious for its dismally low child-sex ratio, this is an important event organised by our allied organisation in Delhi, Action India. Dwarka, where Nandini and her family belong to, falls in the north-western part of the state of Delhi.  In the 2011 census, this area recorded one of the worst child-sex ratios in the country – 867 girls to every 1000 boys – that is 47 points below the national average!

Please note that here we are talking about a place that is barely 15 miles away from the country’s Parliament building.

In a highly patriarchal society like India, male children are always preferred over girls. If at all a girl is born in the family, it does not generate any excitement. Nandini recounts,

“I am glad you all came.  Usually nobody celebrates if it is a girl. I am yet to see anyone in my family feeling happy about her birth. But I don’t care. I will spread the sweets. I will celebrate”.

She screamed into the mic, holding the baby tightly to her chest. The idea of Beti Utsav is to celebrate the birth of a girl in  those localities where they usually do not. While I walked through the narrow alleys, accompanying a large group of young girls, boys and colleagues, I could hear curious questions being thrown at us from all around. 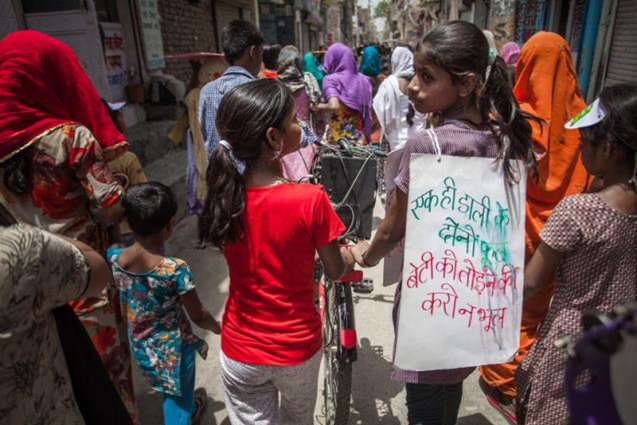 I noticed that one of the volunteers in the group was engaging a fellow resident on why it is so important to celebrate the birth of girls. She was fiercely countering every argument that came her way and was doing it successfully. To me, the sight of that 14 year old girl, taking on the clichéd arguments of a middle aged man head-on, was a moment of immense significance in this campaign for gender equality.

It is discussions like these that we need to generate – in every nook and corner of this country, with an immediate sense of urgency, before the India’s child sex ratio slips below 900 and is beyond everyone’s control. Please remember that it is a national crisis that we are staring at and we have very little time for course correction. 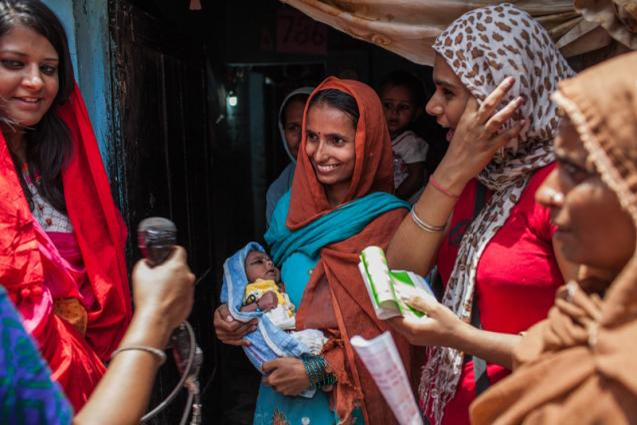 Efforts like Beti Utsav are crucial, significant steps we are taking in our attempts to challenge patriarchal mindsets that are at the root of this crisis. Nandini‘s is not an isolated case. Like her, many women like in our country go through this experience of being ignored after giving birth to a girl—such mothers and children are often left to survive on their own. A lot of girls do not survive the initial years due to utter neglect. The Infant mortality rate of our country is proof to that.

Patriarchy is at the root of this menace. The birth of a girl child is taken as a curse in our society, whilst birth of a baby boy is celebrated with pomp and show. As we delve deeper into this, it comes to light that it is this ‘son preference,’ which has lead to the skewed statics of child sex ratio in the country.  914 girls to every 1000 boys is the worst record since independence. Should I say,Bravo to our collective conscience, eh?

“When I heard the news that my second child was also a daughter I was worried. I was scared that everyone will taunt and mistreat me as there is no boy in the family to take the race forward” says Shabana, another mother we met.

It is only after her mother offered solace and strength that Sahabana was able to overcome her fears. Various reasons are attributed to this ‘son preference’, the most prominent of them being the fact that only a son can take the race forward. If you dig in further, there are many other contributing factors – all connected by that one nasty idea called patriarchy.

“Census 2011 reported a 50 point drop in Child Sex Ratio (CSR) in the 0-6 yrs age group. Implying girls are simply not being allowed to come to the world and if at all they are born, they don’t survive the initial years due to lack of proper medical care, nutrition etc. Is a healthy life the prerogative only of the boys? Aren’t girls human beings? ” – a volunteer tabled the issue in one of the group discussions with community folks.

It is this cycle of ignorance that our campaign is aiming to break. Action India is one of our allied organisations in Delhi who are working towards a gender equal society. They campaign in nine re-settlement colonies of Delhi through our child sponsorship programme. Beti Utsav is a part of this initiative. Mothers of infants, aged less than 3 months, are identified during the community meetings and felicitated by the local community women, volunteers and civil society members.

During the day of the festivity, people of all ages, walk in groups through the streets, singing songs and spreading sweets as they visit every household where a girl was born. The energy in the group is unbeatable. They read out slogans and recite poems as they walk through the congested roads. Attention is also placed in challenging certain common patriarchal rituals. For example, ladoos ( an Indian sweet) are usually distributed when a boy is born in the family. Similarly , every time a boy is born, they drum on tin plates (thali) and sing songs. In turn, the girl’s birth is greeted with silence.

However during Beti Utsav, the group ensures that all these myths and rituals are re-looked at and they go out of the way to celebrate the girl’s birth. That involves sharing ladoos and beating thalis among many others.

In 2013, we celebrated Beti Utsav’s in nine re-settlement colonies of Delhi and specifically reached out to ninety young mothers who gave birth to a girl.  Each time we held this celebration we have had varied experiences and responses — some families were very welcoming to the idea, others had to be cajoled. Some mothers were hesitant to come out while few others demanded us to come to their homes.  But every time that I have been a part of this event, I could never ignore the resolve and grit of these young girls and mothers to ensure a life of dignity for themselves and their little ones. 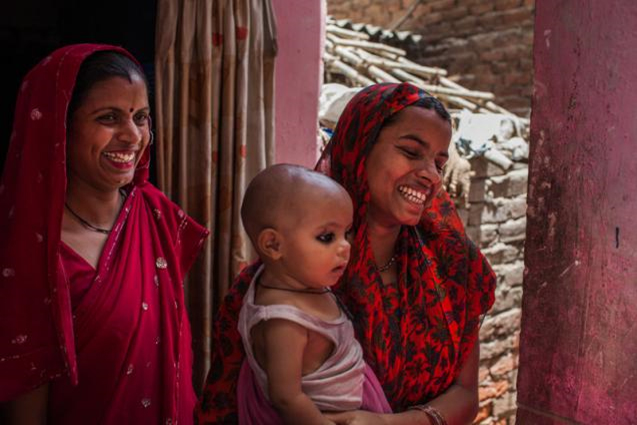 We need to scale it up now. Take it beyond Delhi. Ensure that such festivities happen every 3 months, everywhere. In that sense, Beti Utsav is a daring attempt. To quote Emma Goldman,

“Every daring attempt to make a great change in existing conditions, every lofty vision of new possibilities for the human, has been labelled utopian”.

And history has shown us that they become lived realities sooner or later.

Beti Utsav too will be. You and I should be part of it. 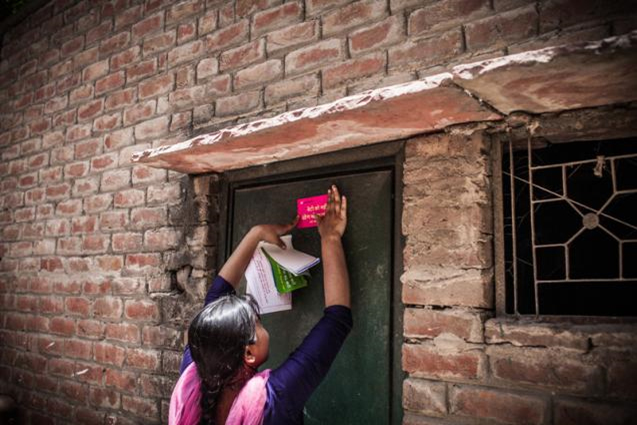 NEXT STEP: A regular follow up with these mothers will be done to ensure that the children are immunised and healthy nutritious diet is being taken by the mother. Later these women will be encouraged to be part of ‘Nigrani samuh’ which will keep a tab on women and girl child well being in the area. In next phase, we plan to rope in Anganwadi workers and as well as district hospital staff and doctors for felicitating the new mothers.

(You can write to the author at Smita.Khanijow@actionaid.org. The photographs have been clicked by Florian Lang, a freelance photographer based in Delhi)