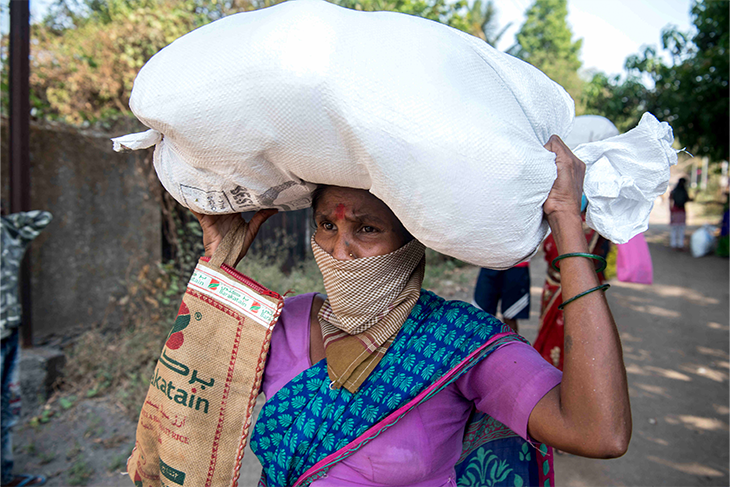 When families are under increased stress to make their ends meet, the burden on women rises disproportionately. This has a deeper impact on her physical, social, physiological, psychological condition

Renu Devi, in her mid-twenties, lives in an informal settlement located at Stand Road in Patna. Renu is a domestic worker, and her husband is a daily wage worker. Renu’s family had barely managed to overcome the economic hardships caused by the lockdown during the first wave of the pandemic when the second wave hit the country and lockdowns were declared once again.  This time around her husband had no work for over three months. Renu too was asked not to come for work. Renu said this was because domestic workers were seen as potential spreaders of virus. The family found it very difficult to run the household, on Renu’s income of 4,000 rupees a month. Renu has three daughters and two of them fell sick during this year’s lockdown and the family did not have money to consult a doctor or buy medicines for their daughters.

More than eighteen hundred kilometres to the west, Rakhuben also struggles to survive. She lives in Chanch village on the Arabian coast of Amreli district Gujarat, with two children and her in-laws. Her husband had contracted COVID during the first wave, and the family spent all their earnings and savings in his treatment. Sadly, he could not be saved. Rakhuben had no time to grieve her husband’s death, as she had to take care of the family on her earning as a fish vendor. With markets closed during the lockdown her fish vending income stopped. As if this was not enough, the Cyclone Tauktae, which hit the coastal areas of Gujarat in June 2021, destroyed the house they had built with years of their savings. The area where Rakhuben lives is quite interior and cut off from the main road. Support hardly reached this area. The family lives under immense distress with no means to make their ends meet.

The stories of Renu and Rakhuben are unique in the specific ways that each have been impacted, but they are not alone. Women across millions of families ravaged economically by the pandemic, are facing great distress and struggle during COVID.

For domestic workers, apart from the increased pressure of earning and their own household responsibilities, the work pressures also increased as there were many households with COVID positive members. The second COVID wave hardly left any house untouched, and domestic workers emerged as key care givers in many middle-class households.

The number of domestic workers in India could range from official figures 4.75 million, to ILO estimates of 20 million to 80 million people. Nearly two-thirds of these are women. Lack of political and legal recognition as workers has left domestic workers structurally vulnerable to the conditions of poverty and at the mercy of their employers, exposing them to potential harassment, discrimination, and exploitation. The pandemic has only exacerbated their struggle.

Fisheries was another industry where workers have taken a hard hit with the lockdown. With the perishable nature of the stock and hardly any cold chain or storage facilities, tons of stock were dumped by fish vendors. The Department of Fisheries puts the population of those dependent on fishing, both marine and inland at more than 28 million, 44% of whom are women.

The lockdown has caused similar devastation to several other categories of people in informal work.

ActionAid Association carried out two rounds of national longitudinal survey, to study the impact of COVID on informal workers. While the round one revealed loss of livelihoods (3/4th of the respondents), loss of wages (50% received no wages and 17% partial wages) and additional debts; a key finding of the second round was that around 42% of those who were rendered unemployed by the lockdown in May, remained unemployed nearly four months later in September 2020. Wages too remained worryingly low. Almost half of the respondents were earning less than Rs 5,000 per month. Only about eight per cent earned more than Rs 10,000 per month.  The survey also revealed huge gender disparity in wages. The average monthly wage earned by women was much lower than that by men across all major occupational categories in the sample.

According to a September 2020 report by UN Women, there are 74 crore women in the informal economy globally whose incomes fell by 60% in the first month of the COVID pandemic. A report by Azim Premji University reveals that between March – December 2020, 47% of the women who lost their jobs were made permanently redundant. This compared with around 7% of male workers, many of whom either returned to their old work or look up new earning activities like selling vegetables.

With the regular medical services remaining suspended during the lockdown, there were thousands of women who did not receive the regular prenatal or postnatal care, diagnostic support and medicines, which they would have received free of cost from the government health centres. With the current country data on the status of anaemia among pregnant and young mothers and of child health remaining worrisome, one can only wonder about the health and well-being of these women and children in the absence of necessary medical support, health suplements and proper nutrition. During our COVID response work, we came across hundreds of such women who found it difficult to procure the basic medicines and milk for their children.

Rakhuben who lost her husband to COVID found it difficult to prove his death as being due to COVID, to access the relief provisions that Gujarat had announced for different categories of workers. Many such families who lost their family members to COVID faced same situation.

When families are under increased stress to make their ends meet, the burden on women rises disproportionately. This has a deeper impact on her physical, social, physiological, psychological condition. The existing inequalities, structural discrimination and the perceived lower status of women along social, economic, cultural and political lines, increases women’s vulnerability in the context of a pandemic. In societies where women’s issues and their very existence are coloured by misogyny and patriarchal values; in a context where laws to promote women’s rights, including legislation against domestic violence, dowry, succession and sexual harassment, are seen as “threatening domestic stability” and as being misused by women to frame men, and particularly by those in institutions who have the responsibility of protecting and promoting women’s well-being, the vulnerability of women increases exponentially even as they are confined to their homes. A report by Ravindran and Shah estimated that violence against women in red zone districts was 131% higher than the green zone districts. This is attributed to fact that in red zone districts mobility was completely denied for specified durations. Further, in ActionAid Associations own geographies of work, we have seen increased incidences of young girls being forced into marriage and many others on the brink of being trafficked.

Speaking about the United States of America in June 2020, renowned journalist George Packer wrote: “The coronavirus didn’t break America. It revealed what was already broken.” This holds true for the condition of women in India.

We need to see COVID-19 as a wake-up call. It is high time concerted and sustained efforts are made with the required political will, to ensure gender justice in India. There is a strong need to build solidarity with women, to help amplify their voices and build their agency. The institutions and protection and care giving mechanisms like helplines, one stop crisis centres, legal aid cells, welfare committees, complaints committee need to be made functional, strengthened and be proactive in responding to the needs of women. A range of engagements are needed to deal with the different vulnerabilities women face in addition to patriarchal values – class, caste, indigeneity, minority status etc. Ensuring women’s independent economic well-being can go a long way in promoting her agency and ability to assert her rights. This can only be done by safeguarding her rights in the world of work and her share of property in the household.

To bring gender justice and equality in the workspace, we will need to see the world of work as a continuum of the unpaid care work that mostly falls on women. This needs to be recognized first and then reduced through socialising many of the services and ensuring women’s access to labour saving devices. A national concerted campaign can help create a cultural context where the distribution of care work between men and women becomes the norm and not an exception. Such measures will help expand women’s participation in the labour force in India, which has one of the world’s lowest rates.

Domestic workers like Renu who have emerged as key care givers for thousands of families, need to be treated as front line workers and prioritized for vaccinations. Decent wages need to be fixed for them along with decent working conditions and hours of work. The civil society has long been advocating for a separate legislation for them that helps to protect and advance their rights.

For the vast section of the informal workers adversely affected by the pandemic, it is good to see relief provisions announced after the first and the second wave lockdowns, however the government much look at comprehensive ways which gives assured incomes to workers through decent work opportunities, employment guarantee and required support mechanisms. This should look at addressing existing inequalities in the labour market which has largely locked marginalised groups into low-value, undignified and low-paid informal work with almost no social security. Awareness programmes should be carried out to disseminate information on the relief provisions and availability of social security schemes, ease the process of registration and facilitate people to access the benefits.

With more than 90% of India’s workforce in the informal sector, we need universal social security to ensure coverage for all informal workers and people dependent on the informal economy. We also need to recognize that specific context of some categories of work may not allow these workers to access social security and protection. Domestic workers are a case in point here. Their working hours vary and they do not have a constant employer-employee relationship. So even when domestic workers have been included in the Labour codes, given the nature of their work, they will struggle for social security and protection. The government must consider such peculiarities while creating policy framework to protect these workers.

Disclaimer: The article was originally published on Thrive Global. The views expressed in the article are the author’s and do not necessarily reflect those of ActionAid Association.