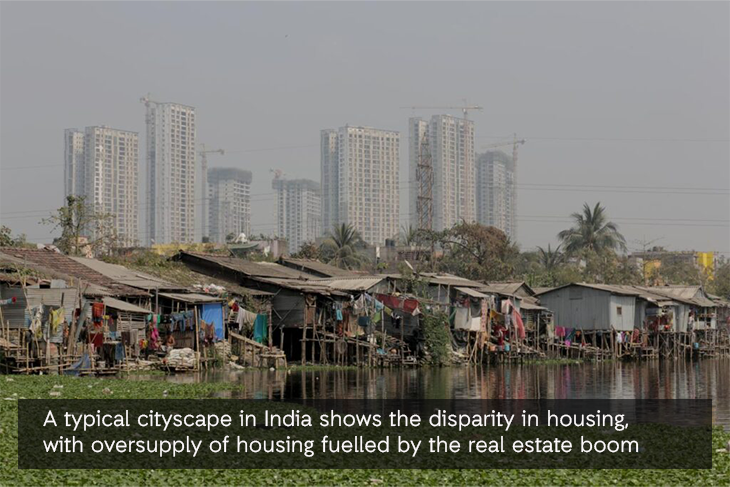 A midnight stroll in any Indian city will present to the onlooker rows of citizens sleeping on the pavements braving the winter winds with or without a blanket. Latest available data show that the urban housing shortage across India was at 18.78 million houses for the period 2012-2017 with 95 percent of the gap being for low-income households. The same report states that at the same time, there are 11 million vacant homes across urban India. In a country which is known for paradoxes, such data does not surprise many.

The 21st century is often referred to an urban century – cities will rise across the globe and define future trajectories of human civilisation. With millions of people arriving in cities in the developing world every month and an estimated 70% of global GDP arising from urban areas, the proposition of an urban century does not seem farfetched. But whether such a proposition is feasible or at the very least, desirable is a matter to ponder upon. If the COVID-19 pandemic and the associated lockdowns are any indication, the notion of an urban future, at least for India, would find few takers.

The loss of housing emerged as a major issue during the lockdown, which perhaps contributed if not precipitated the decision of many migrant workers to return to their native places in rural India – the one they had left in search of a better life. ActionAid Association’s first round of the National Survey of Informal Workers showed that almost 60% of migrants said that they had to vacate their housing after the lockdown. It was particularly challenging for the migrant workers as most of them stayed in rented housing. Several interlinked factors including job loss and inability to pay rent contributed to several migrant workers losing their houses in the aftermath of the lockdown. Many of these workers did not identify themselves as migrants per se, and had been living in the same city for several years. The fact that they had no ownership rights on the property that they stayed played a crucial role for their homelessness when crisis struck.

The Ministry of Housing and Urban Affairs, Government of India has come up with Affordable Rental Housing Complexes Scheme, a sub-scheme under Pradhan Mantri AWAS Yojana- Urban (PMAY-U) in order to address the issue of affordable housing for the urban poor – mostly the migrant and informal sector workers. PMAY-U is an effort that is commendable, having sanctioned and built more houses than any other previous housing scheme before it. However, developmental goals such as ‘slum-free cities’ and ‘modern apartment buildings’ need to take a backseat, and investments should be directed towards the needs of beneficiaries, to truly enable development. The Government plans to either utilise already vacant housing stocks available with them or build new affordable rental units under this scheme. But as with past urban public housing projects, the policy formulation has not taken into consideration the primacy of livelihood opportunities in the lives of the informal and migrant workers. The rental housing schemes have tried to push the workers to the periphery of the cities, often outside the city limits, away from their place of work. Such apathy of the state machineries hinders the guarantee of a dignified living to the urban poor. Slums and informal settlements are too often seen as urban eyesores, and not as the assertion of rights by the urban poor. Thus, the settlements of informal workers most often lack basic utility services and remain prone to water and fire hazards, apart from remaining at risk to communicable water and air borne diseases.

Safe and affordable housing is one of the key requirements for fulfilment of the Sustainable Development Goal 11 – Sustainable Cities and Communities. Yet, urban spaces have failed spectacularly in ensuring protection and dignity to City Makers – the migrant and informal sector workers. The dominant elite-driven perspective of cities and urban planning seeks to deny social, economic or political spaces to the vulnerable and marginalised populations, perceiving them as an underclass whose services are to be exploited but who are not to be included as equal participants in the urban transitions, limiting their access to urban services, livelihoods and assets – especially housing.

If housing for all is to be ensured then policy makers need to understand the inter-linkages between urbanisation, migration and rural distress. At the earliest, housing schemes should be delinked from urban development policies and looked afresh from the lens of cyclical migration flows. Short-term rental housing options like hostels for cyclical migrant workers, shelters for the homeless and public investment on housing development for the poorer households need to be prioritised. Focusing on location, nearer to workspaces, for affordable housing projects can ensure success for future housing schemes, more so during times of health crises when public transport services have often been disrupted. Schemes addressing access to basic utility services like drinking water, health and emergency services and proper toilets and sanitation infrastructure needs to be converged with affordable housing development projects.

As cities gradually open for business, the return of migrant workers is contingent on greater public investment in improving their living conditions and access to healthcare and other services. If this is not done and workers are forced to move due to rural distress, only to find themselves back in unhygienic and miserable conditions in cities, we would end up perpetuating cycles of disease, displacement, and poverty. Addressing safe and sustainable housing as a right of every citizen can truly ensure a roof over every head.