As the water recedes, the true extent of devastation in Kerala is becoming clear. The worst floods in the state in 94 years, this disaster has taken 486 lives and counting, and completely damaged more than 11,000 houses, with more than 1.15 lakh houses partially damaged. More than 14 lakh people had to be shifted to relief camps. With 57,000 hectares of farmland affected by flooding, providing food to those affected is essential, especially children at risk of malnutrition. Drinking water is also scarce, with stagnant floodwaters contaminating many wells. Outbreaks of rat fever and Leptospirosis have already been reported, and open defecation is expected to spread other diseases if sanitation issues are not rapidly improved.

However, the damage has not been spread evenly between groups. Almost 70% of Dalits in the state live on flood plain areas, and are disproportionately represented in the relief camps while further inland, massive landslides have cut off tribal communities. These groups are less able to receive the support of relatives and so are especially vulnerable.

ActionAid appealed for help and was able to raise solidarity support which it is now directing towards humanitarian response to address needs of affected communities.

With the help of our local allies and partners, and together with the courageous support of numerous volunteers, we conducted a rapid needs assessment in four districts — Idukki, Alappuzha, Pathanamthitta and Wayanad. Based on our assessment, we provided shelter kits including mattresses and bed sheets; dry rations; saris to women; sanitation; and hygiene and dignity kits to the worst-affected communities. Keeping in mind the vulnerabilities of women and girls that are exacerbated in times of crisis and emergencies, we adopted a gender-sensitive approach to preserve their dignity while staying in relief camps.

Schools have been affected and children’s education has suffered. ActionAid is dedicated to providing 1,000 of these children with educational materials, including notebooks, stationery and toys.

As the victims of the flood are returning home, 10,000 km of roads must be repaired to get the state moving again. Households across the state have seen livestock suffer with almost 50,000 animals and 1.7 crore poultry dead. Even those who can return to work will lose income if first they have to repair and clean their homes. ActionAid has designed for livestock support plans to 200 families, as well as identified 200 families needing support as they rebuild their homes. For 200 others who cannot work, which include the elderly and disabled, unconditional support needs to be extended.

None of this work, however, can repair all the damage wrought by this disaster. No one can control the weather, and with climate change likely to increase the incidence of floods in future, it cannot be enough to simply respond to flooding. People in Kerala must be empowered to build resilience and resilience-building requires sustained engagement with communities; ActionAid is in Kerala for the long-haul.

Our experience has strengthened our conviction that people need access to both information and resources, to be better able to protect themselves from the impact of disasters, and to access the help to which they are entitled. We understand that change will only happen and be sustainable if rights-holders are aware, conscious and organised to challenge power and to hold the State and other duty-bearers accountable in all situations – including in emergencies. Our humanitarian response thus seeks to be community-led, as experience shows that communities are best placed to direct the long-term response to build resilience to disasters, and are the experts on what they need to recover, and to secure their futures. By listening to people, we can make sure that our responses are appropriate and meet the needs people have expressed.

It is thus crucial to build a long-term, respectful relationship with people in the state. During relief distribution, ActionAid installed transparency walls and collected feedback from the communities it served. We supported women’s leadership in the aid operation. Having built a relationship of trust with affected communities, ActionAid will focus on empowering local communities to help themselves. We will be involved in monitoring and advocacy to ensure people can access their entitlements and compensation, and will participate with affected communities in people’s planning processes to help build resilience. Importantly, the voices of marginalised groups most affected by the floods must be elevated.

Working closely with local administration, the state government and a network of civil society organisations, ActionAid India will participate in citizen’s initiatives to help evolve social development policies that will reduce disaster risk in Kerala, keeping in mind the state’s unique ecology and topography, and focussing on the specific needs and experiences of women, Dalits and tribal communities in the aftermath of the disaster. 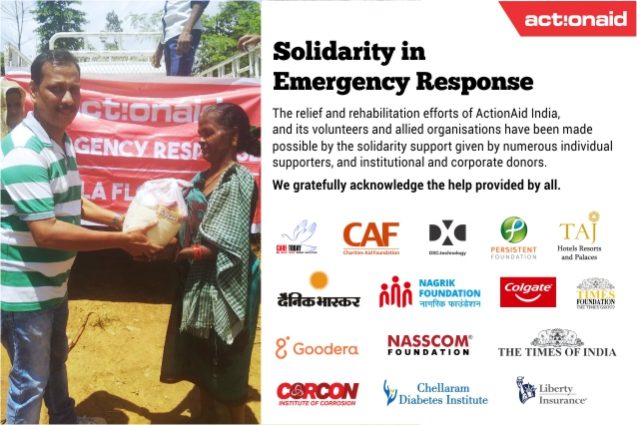