A short account by Ayaan Raza about how he built support for victims of extreme weather in the USA, Mozambique, Malawi, Zimbabwe and India.

Once my final school exams got over, I started to plan for the next fundraiser with my sister Numaa Raza . My Dad told me about the people affected in his home state of Tamil Nadu, in India, as well as in the state of Odisha. I also found out that the people in midwestern states of USA, including Illinois, Iowa, Missouri and Nebraska, faced stormy weather and some countries in Africa, including Mozambique, Malawi and Zimbabwe, affected by the Cyclone Idai.

I started to research on the disasters that had struck these areas and made some notes. I discussed with my parents about possible places to do the fundraiser. We reached out to the local supermarkets, local libraries, malls and community centre about having the fundraiser at their location, but no luck. Finally, one of my dad’s friend recommended trying out the local farmer’s market. We went and spoke to the information desk at farmer’s market in Campbell and Palo Alto, and they suggested that we could hold the fundraiser outside any store provided we get permission from the store.

To have my first fundraiser at the Farmer’s Market at Campbell, we went and spoke to the store owners to get their permission. We got permission from Chris at RocketFizz, a SodaPop and Candy Shop in Campbell to place the fund-raising stall outside their store on Sunday, 16th June, 2019. The Farmer’s Market in Campbell opens only on Sundays. As part of the fundraiser, my sister and I decided to sell handmade handicrafts which my parents bought from Chennai and we went ahead and created a price list for the items.. Drawing from my research, I created a flyer for the event.

On the day of the fundraiser at Farmer Market Campbell, my dad and I set up the table outside RocketFizz store at 8:30am in the morning. We went and spoke to some of the stalls asking for their permission to put up our flyers to spread the word out about the fundraising happening that day.

As this was the first time I was doing a fundraiser by myself, I was excited. During the fundraiser, the people were very friendly and they came over and spoke to me about the fundraiser. I explained to them the devastation caused by the cyclones resulting in loss of lives, homes and farmlands which affected people around the world. I also shared that all proceeds from this fundraiser would go to organizations which are helping the people in these regions. My dad was handing over the flyers to the people while I was talking to the people about the fundraiser. I even got to meet the Vice Principal of Baker Elementary, my school, to visit the stall and offer her support by buying some items. The fundraiser continued till 2:00 pm until the Farmer’s Market closed. I would say that the event was very successful and I raised good amount of money at the Farmer’s Market at Campbell.

My Dad and I went and spoke to the store manager Jennifer Friedman of Costco Wholesale in Sunnyvale which is one of the largest wholesale stores in the Bay Area, in San Francisco. Jennifer was very happy to hear my efforts and gave me suggestions to have the fundraiser at the employee breakroom. So I went ahead and kept the board there for a week and collected some funds from the employees.

My final fundraiser for the same cause was at the Farmer’s Market in Palo Alto. This time, I got permission from the Casual Chic Saloon to have the fundraiser outside their store. My sister joined my Dad and me in this fundraiser and we set up the table. My dad distributed the flyers while my sister and I did the fundraising with the folks who were visiting our booth. We were there at the Farmer’s Market until their closing time.

I would like to thank RocketFizz, Costco Wholesale and Casual Chic Saloon for their help by  giving me the permission to hold the fundraiser.. I would also like to thank Ms. Esther Mariaselvam of ActionAid Association for her help and guidance during the fundraiser. I would like to say that this fundraiser was a great success. I learnt a lot from this fundraiser and I had a great time talking to people and raising awareness about the problems faced by people because of the disasters. 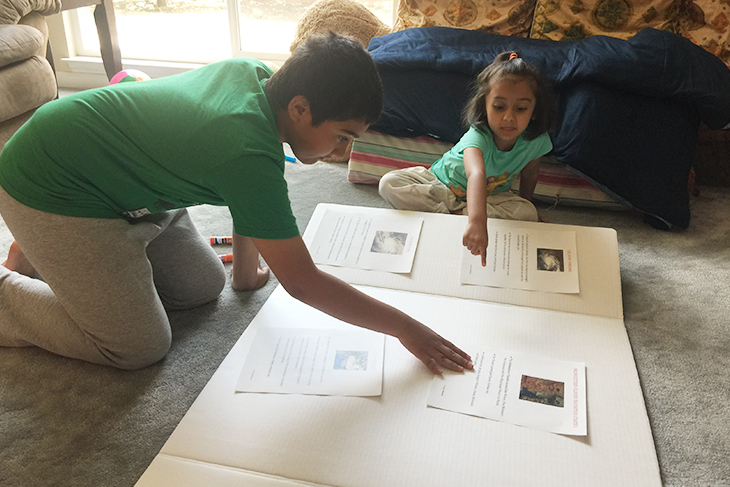 Ayaan and Numaa Raza working on the information board used for the fund raiser. 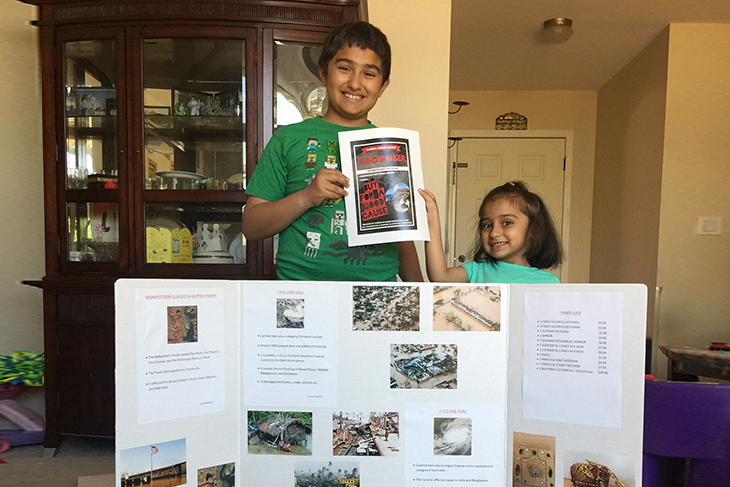 Ready with the information board and flyers to inform people about the fund raiser. 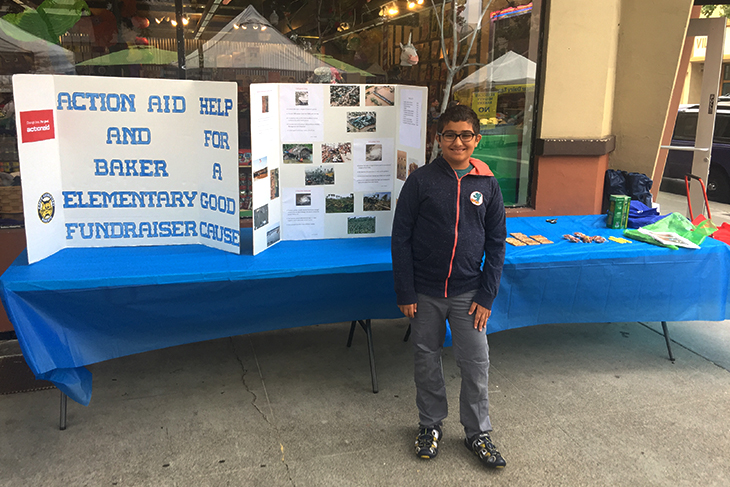 Ayaan Raza at the fund-raising stall at Campbell Farmer Market. 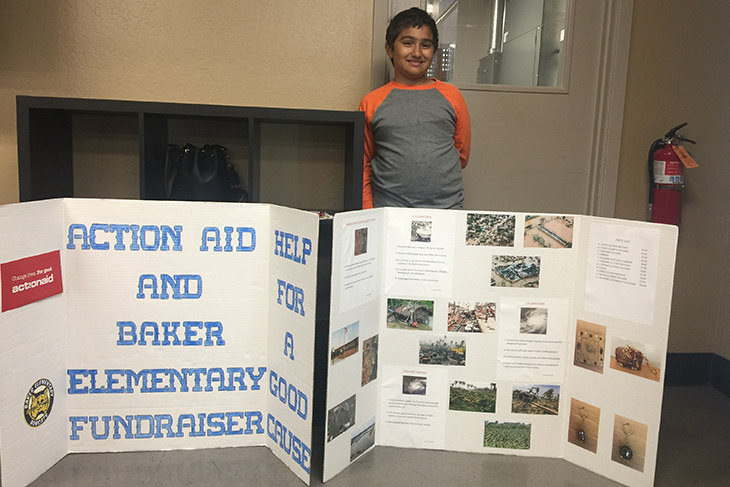 Ayaan at the fund-raising stall at the breakroom of the Costco Wholesale Store. 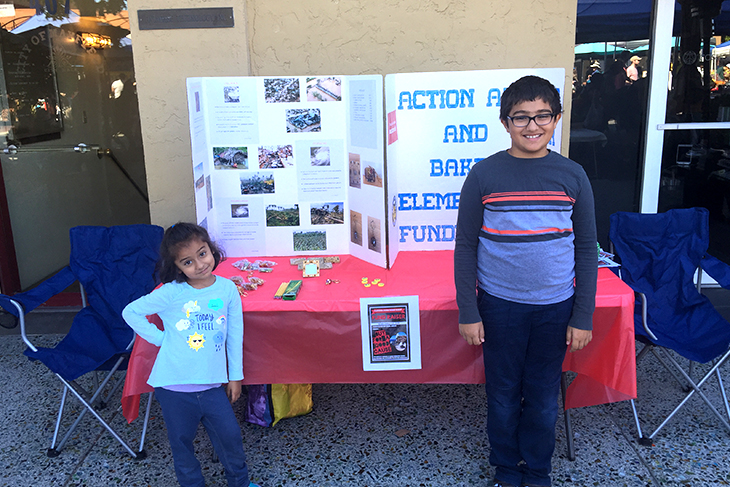 Ayaan and Numaa Raza at the fund-raising stall at the Farmer’s Market at Palo Alto. 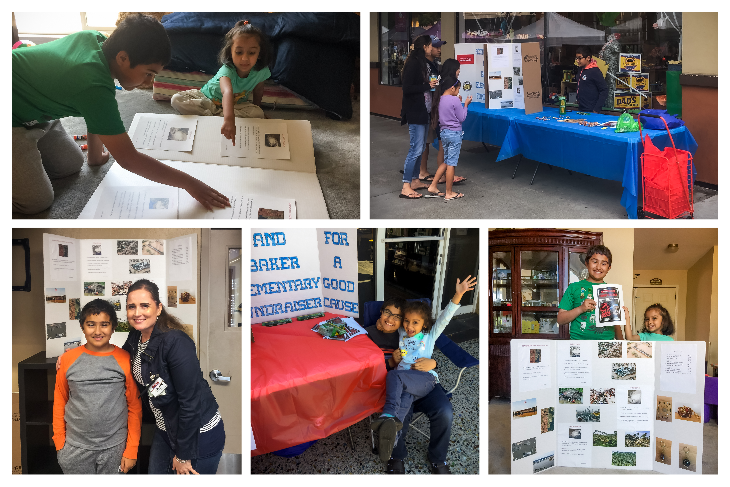 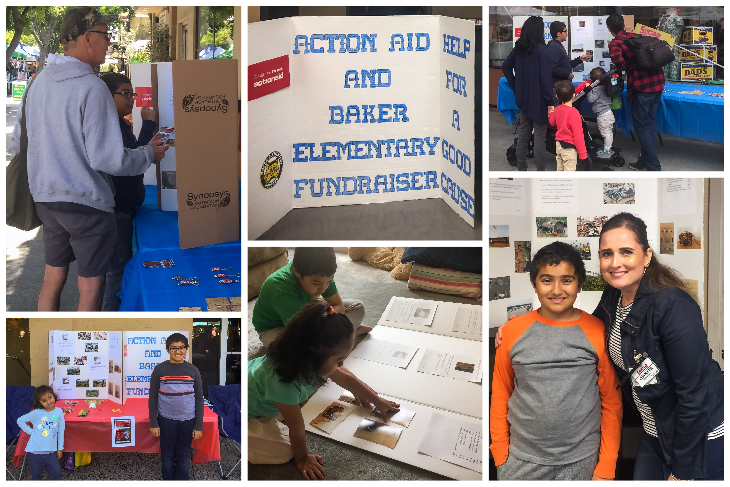