Part 4. The story of Swanky Clean Cities and ‘that’ Resettlement.

People in Bawana have been gradually coming to terms with life’s miseries ever since 2004, when they were first plucked out of the capital city of New Delhi and pushed here. This was as part of the ‘city-clean up’ exercise of the State Government.

‘City clean up’ is the new thing in India. Once a city comes up, with its brand new shopping malls, shiny roads and is later deemed as ready for a voracious weekend consumption of the powerful middle class, the next step is to ensure that there are no squatters around it. It does not matter if those who squat around the malls and roads are the same guys who broke their backs to build it.

So we take them out. To a distance that is back of the beyond. Bawana is one such colony in the oblivion that today shelters Delhi’s poorest.  It is sixty kilometres or more from the main city, far away from the sight of foreign dignitaries and the shopaholic urban middle class.

Ansar used to live in the Rani Bagh area of New Delhi. When he was pushed out of the area along with his family, he was a teenager.

“We had a small house in Rani Bagh. When we first came to Bawana, there was nothing but wide open fields of wheat and maize. The government had not even demarcated areas. They just told what we were eligible for and whatever that you see here today is built by the communities, amicably. We literally, started all over again from scratch in 2006”.

Resettelment unsettles families. It takes away their means of livelihood overnight. Women and men suffer, equally.

Bawana was initially leased out to them for five years. That lease term ended in 2011. Therfore, one can’t overlook the possibilities of another clean-up exercise. As the city expands into outskirts with its concrete tentacles, the ones who live on the margins are further pushed away. The thumb rule is that squatters live on the fringes, always. Give us our cars some racing space, will you? 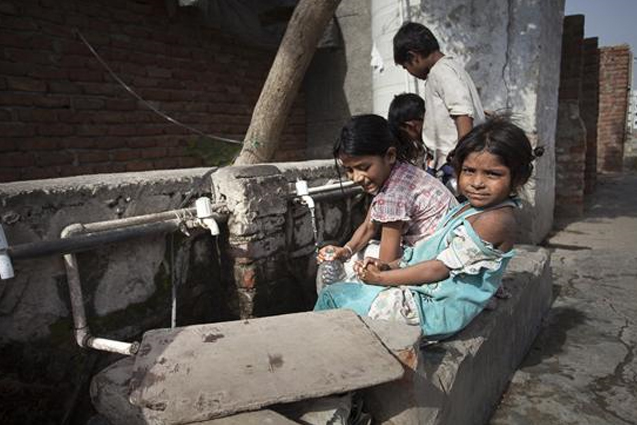 When we talk about ‘inclusive’ growth and advertise it as a reality, let us also realise that Ansar and his friends have no place in that story.

I will not trade my life with that of Ansar for one single day. I know I will not survive those daily rigmaroles he and his friends go through, as part of their existence. That misery and struggle is beyond anyone’s imagination.

But the least that we can do is to stop providing a chorus to the inclusive growth story that is being touted around and also refuse to join in the cacophony that support the corporate takeover of the villages and its farms.

It is that takeover and onslaught on the villages, which pushes them to the cities in the first place. It is a double whammy. First, we take over their villages and farms and later when they come knocking at our doors for shelter, we push them to the perimeter.

Stop for a moment and think. Why are we doing this?

[The author can be contacted at abhilash.babu@actionaid.org – The pictures (except AFP one) have been clicked by Florian Lang who can be contacted at – langwiekurz@yahoo.de. Write to us if you want to get in touch with Ansar or his group of Volunteers. The author wishes to thank Smita and Naghma from ActionAid Delhi Regional Office who guided us through the trip.]

***With regards to the AFP photo – © Copyright 2013 AFP. All rights reserved. No commercial use permitted.

Read Part 1. When the levee breaks