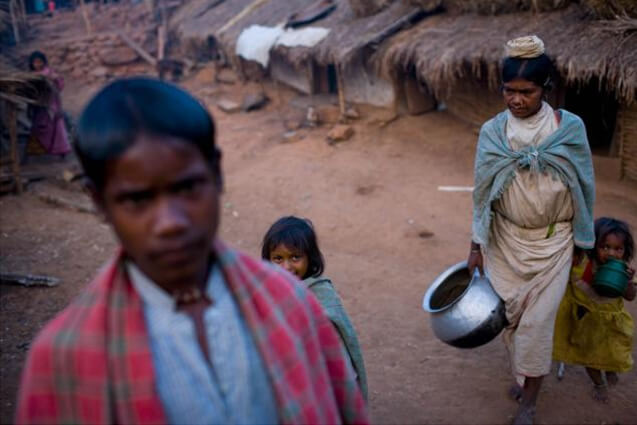 In this series titled “Breaking the Barriers of Bondage”, Chandan Kumar who is our National Co-ordinator for the Bonded Labour Eradication Programme, takes us through a brief history of ACTIONAID’s interventions and also some of our ongoing work.

ACTIONAID’s intervention in the issue of Bonded Labour dates back to 1996. This was an year when the eastern state of Orissa, falling on the coastal line of Bay of Bengal,  witnessed one of the worst droughts of the last century. Starvation deaths were being widely reported, water harvesting systems were drying up, crop losses were estimated at anywhere from 75% to 90%. Life was unimaginably miserable for an already impoverished population in the state.

Bolnagir was one of the worst affected districts and the collective failure of governance, which failed to ensure any of the relief measures reaching this population, was adding salt to their wounds. The desperation was reaching a stage where it was leading to large scale migration of these people into states like Andhra Pradesh. Most of these migrating populations were tribal or dalits, seeking any form of employment that could atleast feed them and their families.

Scarcity is what the cunning feasts on. The local money lenders and contractors in various brick kilns across Andhra Pradesh spotted an opportunity in employing these desperate souls in their factories for peanuts. Most of these people were tucked into trucks and trafficked to various brick kilns across Andhra Pradesh and forced to work in terrible conditions.

Quick to realise the scale of exploitation in this region, ACTIONAID INDIA was intervening in various forms. An assessment of the situation on the ground showed that just about every statutory provisions was being violated – Bonded Labour System (Abolition) Act, 1976, in the light of the constitutional provision like Article 23, The Minimum Wages Act 1948, Contract Labour (Regulation and Abolition) Act 1970, Inter-State Migrant Workmen (Regulation of Employment and Conditions of Service) Act 1979, Juvenile Justice Act 2000 and Child Labour Act 1986.

One of the key interventions by the state those years was to set up a 6000 crore relief package in undivided ‘KBK districts’ of the state (Koraput, Malkangiri, Raigada,Nabrangpur, Kalahandi,Nuapada, Balangir and Sonepur) for a period of nine years. However, recent updates from the ground suggest that this has done little to arrest the issue of migration. Various impact-assessment studies published over the years show that even after spending millions of rupees, the impact is barely visible. People are still migrating in desperation.

How are they trafficked?

Migrant journeys are often full of uncertainty and dread.

An excerpt from ActionAid report “Bolangir to Hyderabad and the politics of poverty” explains this in depressing detail.

As a migrant labourer, looking for a bait for survival, you throw yourself at the mercy of the Labour contractor. First timers usually would have no idea where they are being taken.

Very often these people are huddled together on a railway platform, fending off the cold and gangs of thieving thugs, while the Contractor would bribe the police and railway officials.The bribe is meant to cover up his lack of proper licence and to ensure that with his bulk tickets he could pack up to three hundred people in carriages meant for fewer than a hundred. Several hundreds of migrant workers, clinging desperately to their children and their small cloth bundles, are then pushed into the arriving train by the contractors’ agents.

The contractor often arranges the cheapest route, which means a journey of three days instead of one. Most of them especially women stood for 18 hours, crushed, holding their children, with no water, food or access to lavatories. Fainting, severe diarrhoea, desperation and pain is common.

Death releases some, according to the repeated testimonies of migrant communities. The journey remains the time of most complete abandonment. At Hyderabad, utterly exhausted, disoriented labourers with their families are pushed and drove like livestock into trucks to the final destination – the brick kilns. There is neither shade, nor cool, nor place to wash, nor shelter, nor drink, nor food. Only choking dust, fly ash, and heat. The journey is the first stage in a process of degradation and humiliation that will make workers submissive and cooperative. As well as the beatings and harassment that the labourers will soon learn of, the kiln owners and Sardars explain the rules of the game: at no time, under any circumstances, are any family permitted to leave the site all together. Some family members must stay on site, to ensure that the others do not run away. In general, no workers leave the site unless accompanied – for whatever purpose.

The report goes onto say;

It is not enough to be shocked by the brick kiln industry and to conclude that the only option is to prevent migration, which is where we started. The option to improve conditions of labour must be examined, leaving the big questions about whether a ‘decent’ industry would be a viable industry until later. In this examination you cannot separate the social, economic and political questions.

The brick kiln industry is simple, ruthlessly exploitative and highly evolved. It is profitable enough to get all relevant people to turn a blind eye to its illegality.

‘Officially’ nearly 100% of the brick kilns in Hyderabad are illegal. They simply do not have the licences to operate or the necessary registration for migrant workers. None of the worker welfare requirements within the 1979 Interstate Migrant Workmen’s Act and Building and other construction workers welfare Act are met. Unofficially, a most influential web of landowners (who rent the land), politicians (who are often the landowners), policemen, labour and revenue officials (who all turn a blind eye), Panchayat officials (who may own land, kilns, or be the contractors), and a host of other petty and not so petty officials make lucrative ‘bonuses’ from the industry. The kiln owners are embedded in an intricate economic and political web, sticky with hundreds of dependents. They don’t just need labour, they need compliant, cheatable labour.

We are part of the national campaign ‘Bandhua 1947’ launched in 2012, in collaboration with larger group of civil society organisations [CSO]. The main focus of this coalition will be implementation of bonded labour act 1976 and related policy advocacy.

ActionAid through its allies on the ground is implementing this campaign in six states. i.e. Tamil Nadu, Andhra Pradesh, Karnataka Orissa, Rajasthan and Madhya Pradesh. The focus will be on the following communities; (1) adolescent dalit girls working in garment industry under SUMANGALI THITTAM, facing different kinds of abuse and deprived of entitlements being a worker (2) IRULA tribals in rice mills in Tamil Nadu, (3)Trafficking of children to work as domestic help and other commercial establishments (4) migrated brick klin workers in bondage condition in Rajasthan& Andhra Pradesh and (5) Karnataka and Dalit communities are forced to do manual scavenging in Madhya Pradesh.

These neo-forms of slavery are fulfilling the need of cheap labour market in every corner. It is well evident now that the Groth targets set within a capitalist environment is demanding cheap labour force in significant numbers. To meet these needs, perhaps all the associated stakeholders of such establishments have traded all the basic idea of social justice to achieve their unrealistic goals. This whole phenomenon is leading towards various forms of modern slavery.

It also clearly reflects that there is no political will to resolve this crisis due to politics over minimum wages. It seems that no state government across the country is really interested to ensure minimum wages for unorganised workers. If one refers to various apex court judgements that has come out in recent years, most of them point at the fact that approximately 450 million unorganised workers in the country are deprived of minimum wages and are held in various forms of bondage.

Over the next few articles in this series, I will bring your attention to each of these communities and their struggle. We will begin with Baran in Rajasthan where the members of the Sahariya Community are bonded to their own land for many decades. More on that soon!