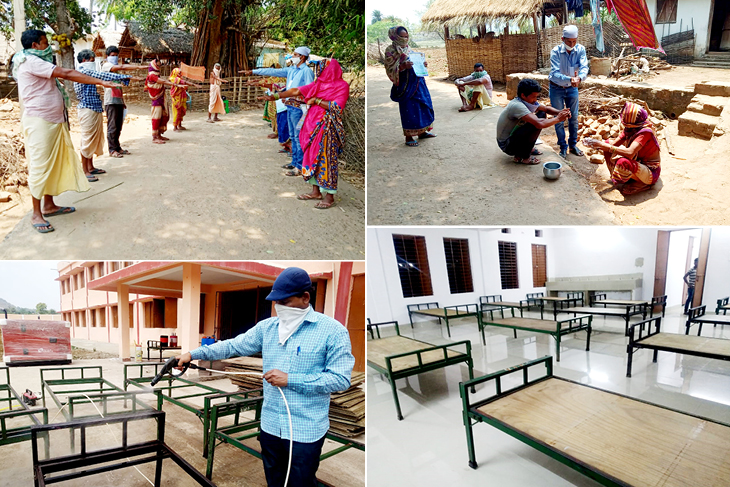 The story of Antaranga and its role in the current crisis

The number of COVID-19 positive cases in the country has just been increasing and Odisha is no exception. Kandhamal is a district witnessing a lot of out-migration of community members to other states in search of work. Upon the imposition of lockdown by the government to contain the spread of the infection, over 8,000 such migrant workers returned home. These migrant families, comprising daily wage earners, construction workers and other informal sector workers, have for now lost their sources of income and are finding it difficult to run their households. With cases growing in large numbers, there have been fears regarding community transmission of the infection.

The ongoing efforts to stop the spread COVID-19 and to help vulnerable communities cope with the lock down in Kandhamal district is being bravely led by volunteers of Antaranga.

In the aftermath of communal violence in Kandhamal district of Odisha in 2008, a youth mobilization platform called Antaranga was started in the district with support from ActionAid Association (AAA) and other civil society organizations in collaboration with the district administration. Since then, Antaranga has been working towards mobilizing youth for building peace and communal harmony, and channelizing their energies towards sustainable, equitable and rights-based development of communities in the district.

The Antaranga volunteers have also been actively engaged in response efforts across the various disasters that the state has seen, including Cyclone Phailin in 2013, Cyclone Hudhud in 2014 and Cyclone Fani in 2019. In the wake of COVID-19 outbreak, Antaranga and Jagruti initiated awareness campaigns among local communities on how to prevent the spread of infection, starting March 10, 2020. Jagruti, is a grass roots based civil society organization who were part of the group that founded the Antaranga youth platform. To prevent the spread of the virus in the district, the Antaranga volunteers have been working towards building resilience among communities in close collaboration with the district administration. They have been organizing mass awareness programmes using sound systems at community level to disseminate information and to sensitize communities about practices such as proper handwashing and maintaining social distancing. Through this intervention, the volunteers were able to reach out to communities across 300 villages in seven blocks of Kandhamal district, namely Daringbadi, G. Udayagiri, Kotagarh, Tumudibandh, Phulbani, Phiringia and Raikia. As part of this campaign, door-to-door campaign is another strategy being taken up by the volunteers for isolation of migrants who have returned to their native villages in the district.

In collaboration with the district administration, the Antaranga volunteers, working in batches of six on a shift basis, were involved in the registration, screening, counseling and health-checkups of migrant workers returning from other states. In Daringbadi block, the volunteers were placed at the entry check-post to the district together with police officials to identify migrant returnees and to ensure their safety and registration. So far, the registration and health checkups of around 1,800 workers have been conducted in Daringbadi block by the volunteers. These brave volunteers also supported the district administration in converting Daringbadi Higher Secondary College into a 400-bed COVID-19 Emergency Centre within just four days.

Well, that’s not all! Amid the lockdown, 17 construction workers and street hawkers from Murshidabad district of West Bengal had been stranded without food in Daringbadi block for more than a week. Jagruti and Antaranga volunteers, on learning about the matter, informed the district administration. The Block Development Officer, Daringbadi, then immediately provided dry ration kits to them.

The Government of Odisha has recently declared COVID-19 pandemic, a “state disaster” under the Disaster Management Act, 2005. It has also announced an immediate package for people to meet their food needs, including three-month ration supplies in advance, four-month pension in advance, an allowance of Rs. 2,250 for boys and Rs. 2,400 for girl ST/SC hostel inmates, Mid-Day Meal rice for primary and upper primary students, and provisions of doorstep delivery of ration and cooked meals by Anganwadi centers. Along with the district administration, the Antaranga volunteers are trying to identify those most vulnerable to ensure they get the declared package. So far, 1,325 most vulnerable people, including the elderly, persons with disabilities, the destitute and single women have been identified in Daringbadi block; they are now receiving hot cooked food twice a day from the Panchayat. The Antaranga volunteers have also been entrusted by the district administration with the responsibility of monitoring the Daberi quarantine center in Daringbadi block where 23 migrant labourers, including one pregnant woman and eight children, are staying. The district administration is providing them two cooked meals a day and breakfast is being provided to them by ActionAid Association and Antaranga volunteers together with Jagruti.

Another initiative, that of the Bike Ambulance, is being managed by the volunteers working with Jagruti, with support from the district administration. This initiative has provided transportation services to 52 pregnant women from the most interior villages so far. All 52 women have had safe deliveries and have returned home with their new-borns. Besides Jagruti, two more NGOs in the district are in charge of the bike ambulance service.

The biggest struggle now is going to be the implementation of Mahatma Gandhi National Rural Employment Guarantee Act, as people are and will be in need of work. Hence, Antaranga’s efforts will be to support the administration to ensure linking all villagers to get work. Secondly, psycho-social counseling will be operational for the affected communities. Since people are in quarantine centers, there is a need to keep a close watch on them and to counsel them to ensure their safe return to their villages. It has also been seen that owing to social stigma and isolation fears, people are fleeing from the various isolation centers.  Hence, spreading awareness and clarity regarding the need of isolation and quarantine will play a crucial role in removing fears in the community, which is what these Antaranga volunteers are now committed towards.