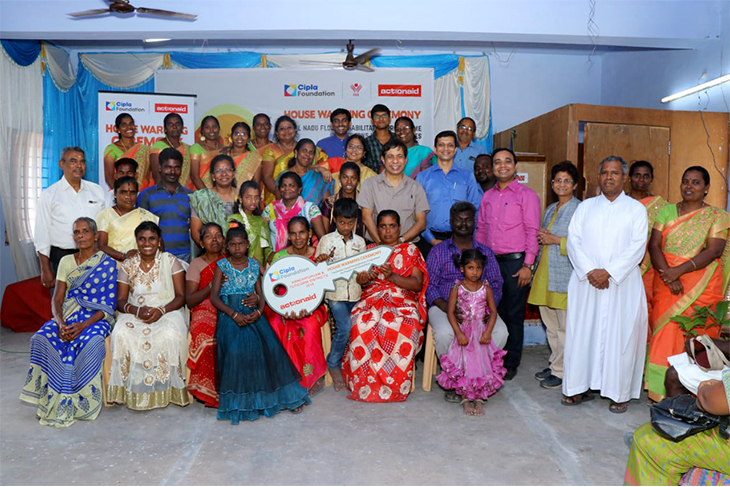 “All this while, I was thinking that God has denied my daughter the opportunity to get married and become a manaivi (wife). My dreams of a good life for her got fulfilled to a large extent through the manai (house) given to us by Cipla Foundation through ActionAid Association India and Centre for Community Services (CCS). I am very happy and relieved today as my daughter can now lead a safe and secured life in the new house,” shares Mahalingam, the happy father of 37-year-old Meena who is intellectually impaired. Besides Meena, there are 20 women and children and 4 men with disabilities who are overwhelmed with the new houses they have recently received as part of the second phase of Cipla Foundation-supported intervention towards Tamil Nadu flood response (9 in Kancheepuram district and 16 in Tuticorin district).

As we all know, in the year 2015, Tamil Nadu witnessed its worst floods in 100 years, displacing more than 4,00,000 people, killing at least 470 and leaving a trail of untold misery in its wake. In response to the disaster, ActionAid Association India got into a partnership with Cipla Foundation in 2016 and reached out to the people living in poverty and exclusion in the state of Tamil Nadu. Of particular significance is the support extended to women with disabilities and their families as women generally suffer disproportionately during any humanitarian crisis. Our humanitarian response used an intersectional feminist lens to identify those whose rights have been disproportionately restricted or denied. Women with disability face multiple layers of discrimination on the basis of their gender, age, disability, and social and marital status. In their own families too, they are not regarded very well and are often denied their right to inherit the family wealth.

As a result of their vulnerability, several Persons with Disability (PwDs) lost their assistive devices during the floods and became immobile, depriving them of relief and other rights. Our timely intervention of providing 151 appropriate devices according to the nature of disability with support from Cipla Foundation went a long way in removing their barriers to accessible environment and in reducing their vulnerability. 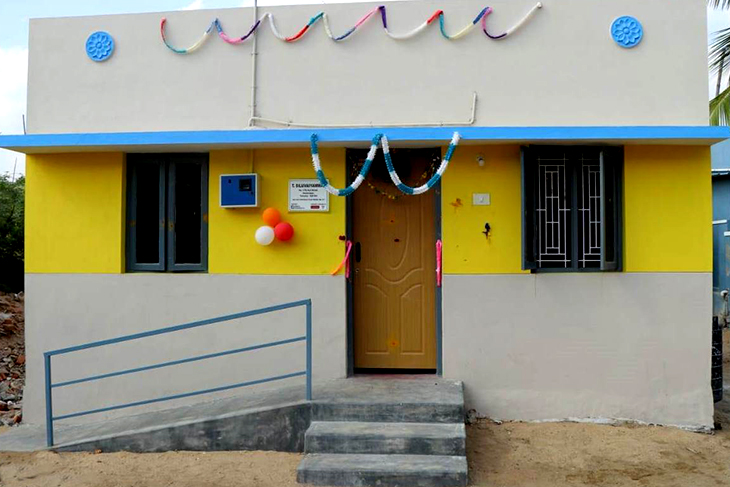 Besides, 60 families were provided shelter support – 35 in Phase I and 25 in Phase II of our intervention. These shelters would go a long way in shielding people from disasters like floods and storms, especially since the coastal areas of Tamil Nadu are extremely prone to disasters. Enabling accessibility of these houses to the women and children living with disability by removing the various barriers, as well as through provision of water and sanitation has led to ensuring their dignity and protection. Our efforts have also resulted in women with disability receiving their legal rights to inheritance. Since it has been widely estimated that women represent a larger population of those who are inadequately housed, this intervention would set a precedence for enabling women with disability to enjoy their rights on an equal basis as others, thereby strengthening gender equality.

ActionAid Association India envisions a world without poverty, patriarchy and injustice in which every person enjoys the right to life with dignity. As ActionAid takes forward its efforts towards ensuring women are resilient in the face of increasing humanitarian crises, we greatly acknowledge Cipla Foundation’s support in empowering women. Our collective efforts capacitated 54 women with disability to lead disaster preparedness, response and recovery efforts to secure their rights in emergencies. Furthermore, we enhanced the skills of 59 women with disability and parents of children with disability by supporting them for small-scale ventures, such as quilt-making and jute production, and bunker shops, thereby facilitating economic justice.

The comprehensive and inclusive humanitarian response efforts by ActionAid with immense support from Cipla Foundation have dispelled the hard reality faced by these women with disability. It has gone a long way in paving the way for an inclusive and a more gender-just society. In addition, Cipla Foundation has also extended support in the other disaster-struck states which has proved extremely critical for the worst-affected and most excluded families that ActionAid reached out to in the aftermath to the various disasters.

Let us continue to build an inclusive society where no one is left behind!