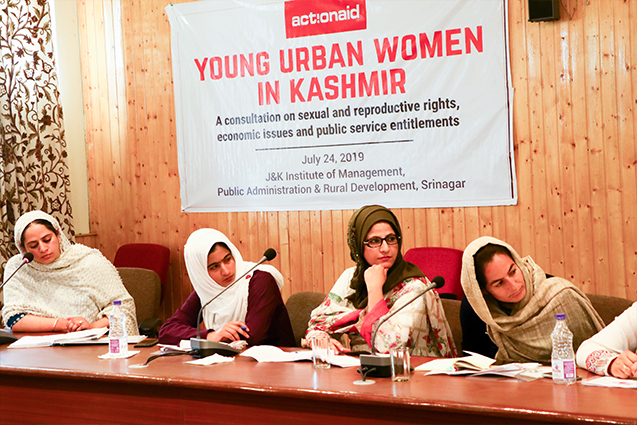 Ms Rukhsana Gani (KAS), Director General Social Welfare, Jammu & Kashmir was the special guest on the occasion. Ms Gani spoke about the role her department had played and continues to play for young girls and women. She talked about the institutions working under the department to provide assistance in various spheres including health, education, counseling and rehabilitation. “Women need to be at the helm of affairs when it comes to policy making. Organizations like ActionAid need to support government especially in the domains of policy making by bringing grounded evidence and doing awareness generation on the ground – as there are many polices in the department about which a lot of women and young girls are not aware about,” said Ms Gani.

Ms Nayeema Ahmad Mehjoor, former Chairperson J&K Women’s Commission, spoke about the economic challenges that women face at the workplace highlighting occupational hazards faced by them, menial wages and sexual harassment. She talked about the need of having safe environment for girls in and outside their households and at their workplaces, including institutions of education. She recommended the conducting of field surveys to see the state of exploitation taking place against working women adding, that women should take part in policy making. “There is much work that is going on for women empowerment and much needs to be done to bring equal opportunities that working women in other parts of the country enjoy.”

Dr Peer GN Suhail, Mission Director Skill Development Mission, J&K gave a brief overview of economic issues of young urban women in the state and the interventions led by the Skill Development Mission. “We have tried in our various projects to not only impart skills in young women but also we have tried to break stereotypes by imparting such skills in women which were earlier a men-monopoly,”  said Dr Suhail added that capacity building programmes for women who come from marginalized communities should be taken on priority.

Dr Nighat Firdous, the Head of the Department of Gynecology, Lal Ded Hospital for Obstetrics and Gynecology, Srinagar talked about sexual and reproductive health. She said it is about psychological, physical and social wellbeing, not just an illness. “Entire society needs to be sensitive about the health of a procreating woman in particular, it doesn’t only mean a period of nine months, but a woman’s health conditions are to be taken care of at every phase including the postnatal period.” Dr Firdous added that reproductive health should be available, approachable and acceptable to every woman, especially young women – who are relatively more vulnerable.

Ms Rafia Farooq, a researcher at Jawaharlal Nehru University (JNU) briefly touched upon the history of ‘rights’ and how various rights should be approached and said that state is to be made accountable about the guaranteeing of various sexual and reproductive health rights. “We as a society have to be sensitive in respecting the choices women make for themselves and women related issues are not to be dealt only by women rather there has to be an inclusive approach,” shared Ms Farooq.

Dr Zeenat, a gynecologist at Jawaharlal Nehru Memorial Hospital, Srinagar talked about reproductive health risks and consequences for young adults. She said that the reproductive health has to be taken seriously in order to prevent mortality, morbidity, sexually transmitted diseases (STDs) and suicides. “Sex education has to be imparted at school level. Women have to be educated about menstrual issues, unsafe abortions, unwanted pregnancies and many such issues related to their well being,” said Dr Zeenat, adding that a message to take home is that there has to enough awareness to combat the stigmas associated to women related issues.

Ms Arifa Jan, an entrepreneur and Chairperson Women’s Wing Kashmir Chamber of Commerce and Industries (KCCI), encouraged the gathering to take up challenges that our system poses saying that there should be incubation cells for entrepreneurs. “Entrepreneurs are change makers for the entire society – but the enterprise should be ethical,” said Ms Jan.

Ms Sameena Mir, gender specialist, Social Welfare Department talked about the interventions by the Resource Cell at the Social Welfare Department related to economic and social rights of young urban women in Kashmir. “We have one stop centre for women in nine districts where we provide various services to women like legal assistance and rehabilitation,” shared Ms Mir.

Dr Shaheena Parveen, psychologist and youth trainer at Mool Sustainability Research and Training Centre, a trust working with youth to buod livelihood, said that as a society we need to question the standards (gender stereotypes) of what is being presented as ‘normal’ for both boys and girls from the very early age. “Standards for the bodies of women are set from the beginning and we as women need to be comfortable in our own bodies challenging unjust socio-cultural norms that hamper our growth,” added Dr Parveen.

Dr Ghulam Rasool, Chairperson J&K RTI Movement said that our policies need to be gender responsive. A lot of women in Jammu & Kashmir are aware about the Right to Information (RTI) and also practice it in accessing public services. 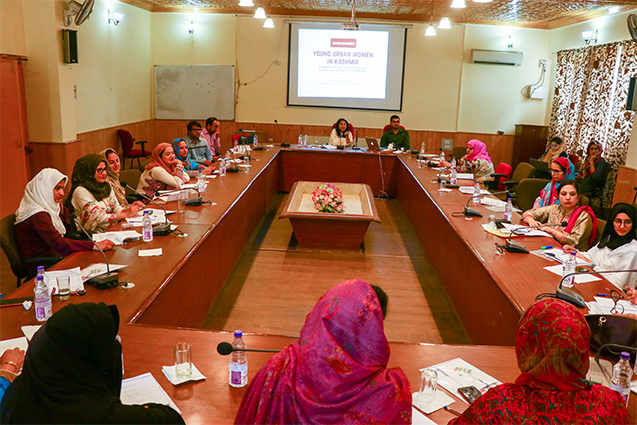 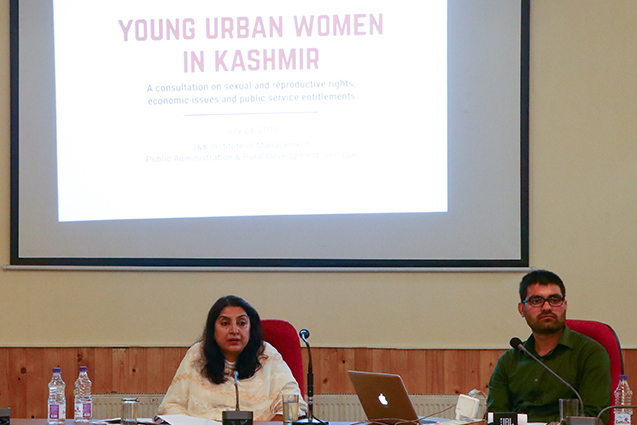 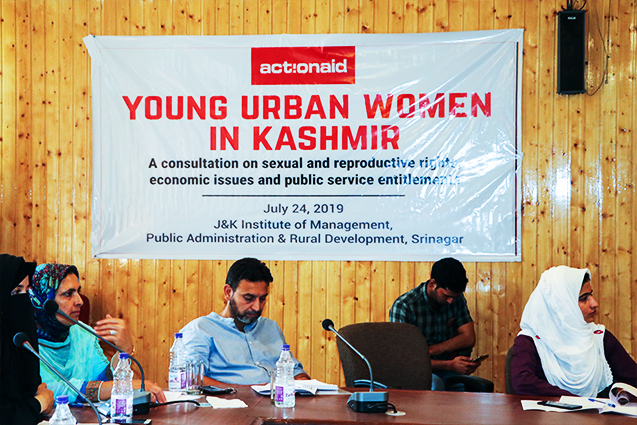