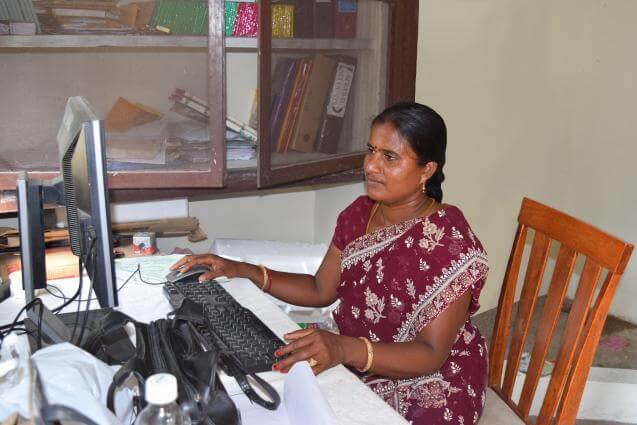 Polio might have reduced Manjula’s physical mobility to some extent, but it could not able to hit her spirit. For the 32-year-old, disability is just a state of mind that she has never allowed to dampen her spirit – not even during the worse ever floods that hit Tamil Nadu towards the end of 2015.

Manjula, who teaches computer and tailoring to children and young girls in her village in Cuddalore district, believes life becomes dysfunctional only when people lose will power to conquer their disability. It was her fighting spirit that helped her to show exemplary courage when the floods hit her village. When she realised that the level of water was increasing rapidly, she rushed to the houses of neighbours and convinced them to leave for a safer place.

“There was water all over and its level was increasing rapidly. I came out of my house and told the neighbours to move to a safer place. By the time we left our house, it was almost submerged. We had to move to one of our relative’s house in Anna Nagar, ” she says recalling the day of deluge.

Manjula lives with her husband in an one-room, asbestos-roofed house in Pethankuppam village. Her husband works as a mechanic but doesn’t have a regular earning source which forces Majula to work overtime to make their ends meet. She not only looks after her family requirement, but also extends financial support to her aged parents who live nearby. During the floods, her house was badly damaged. So, rebuilding her house is the top priority for her at this point in time.

“It took about a week for the flood water to recede. When I returned back to my house, I saw the walls were damaged. All our belongings and document that we could not carry with us were also destroyed,” she says.

“But we cannot spend rest of our life mourning over what we lost. It’s time to set things back on the track. My priority at this point in time is to have a house which is safe to live in. The problem is we don’t have enough money to rebuild the house. ActionAid’s shelter repairing support has been a great help for us,” adds Manjula, who is also working as a computer trainer with Society For Rights For All Women With Disability (SFRAWD), a local partner of ActionAid India, which works towards the betterment and empowerment of women with disability in Tamil Nadu.

Soon after the floods, SFRAWD began its emergency response work providing immediate relief support to the affected families. With support from ActionAid India, the organisation has now started the rehabilitation efforts which include shelter repairing, livelihood and skill development support for people affected badly by the floods.

Like Majula, 35 other women will be supported under this rehabilitation efforts supported by JetAirways. Under this project, these women will not only get support for repairing their damaged houses, but also get skill building assistance such as tailoring and computer training, which will help them take up any livelihood option and become economically independent.