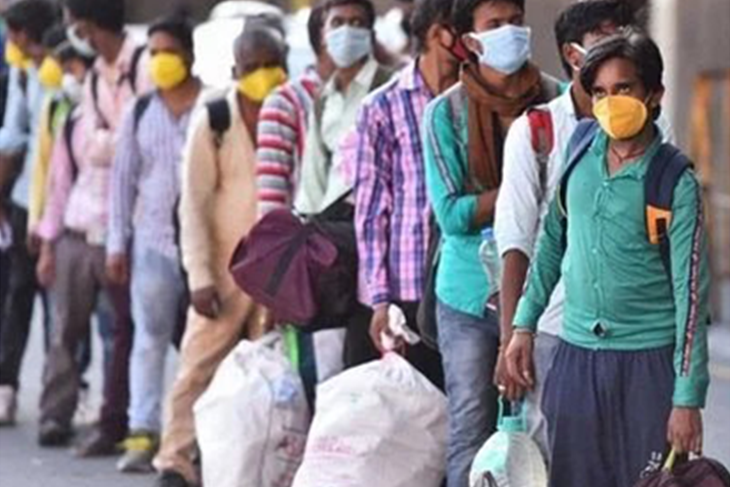 In welcome news, the Union Ministry of Labour and Employment launched the much-awaited eSHRAM portal – the National Database on Unorganized Workers (NDUW) to digitize registration of all unorganised sector workers of India and to link them with the various social security and protection schemes. There are more than 38 crore informal workers in India; hardly a fraction is registered with the worker associations, unions or the labour departments in states, or nationally.

Through this portal, a worker can register in herself/himself by giving details like Aadhar card number, bank account details, apart from filling in other necessary details like date of birth, native place, mobile number, income certificate and social category and will be issued an eShram card containing a 12-digit unique number. To begin with, targets have been set to register unorganised workers from Bihar, Andhra Pradesh, Gujarat, Assam, Chhattisgarh and Delhi by the end of this year.

While the demand for the smooth registration mechanisms under the labour department has long been voiced by the labour movements, the issue came to centre stage in 2020, during the first lockdown when media reported on distress migrant movement and the government did not have any estimates about number of informal workers or social security provisions it could make available.

Later, the National Human Rights Commission (NHRC) through its advisories on Informal Workers and the Supreme Court (SC) both took note of the situation and pushed for accountability of the welfare state by seeking the creation of such mechanisms.

The first step in a long-awaited need for recognition

The worker collectives, trade unions, NGOs and platforms of workers have welcomed the initiative with the expectation that this will further strengthen the labour market and improve wages and working conditions of informal workers, especially women and other vulnerable workers. Furthermore, such a mechanism will also enhance, accountability of the state to the workers of India who for years have been relegated to not just precarity, but also to an invisible existence.

The recent growth of the gig economy in India has also increased the crevasse between worker and welfare protections. This is visible in the angst of gig or platform workers who are uncovered by any labour legislation. The labour codes which aimed to cover these workers are yet to see the light of the day on the ground. Keeping these aspects in view, this portal is seen as the first step to link workers with social security and to be a medium to get recognition to the informal workers such as gig workers amongst other categories of workers including migrant, domestic, street vendor, agricultural workers, home-based workers etc.

If the initiative is integrated with other existing mechanisms in the state and gets backed by a grounded information campaign about its usefulness, it can be an important step to develop and strengthen a mechanism of migrant worker facilitation in both source and destination districts and states.

Many aspects at play

In terms of challenges one can envisage that the diversity within the unorganized sector workers, lack of understanding about the need for registration and social security coupled with poor digital penetration may pose a problem. Though the government has launched a national toll-free number 14434 to assist and address the queries of the workers it is yet to be seen how many people come forth to get registered and in what capacity.

It will be important to enlist the support of unions, workers associations, NGOs and platforms in advancing this effort, and high-intensity district-level information campaigns need to be undertaken by the state governments. It will also help if unions, associations, and NGOs working with informal workers are also given identifications to help register informal workers, mechanisms for which need to be worked out.

The self-registration process enabled through this portal is, yet another milestone for the empowerment of labour. While most of the data sought can be filled by self, the requirement of uploading certificates such as education, occupational and income stands out as it is these documents which surely labourers such as agricultural, home-based workers, domestic workers and several other categories will find it difficult to produce at the time of registration.

Interestingly, the portal allows one to register and issues the e-card without these documents being uploaded. How the lack of these documents plays out while verification of worker for social security one has no way to find out at this stage. There are other features like seeking information on skillsets and formal training which hints at a broader skill development plan in mind.

During the registration process, the portal has created a list of 156 categories of informal work, a list which perhaps would need expansion as this process deepens. There are other elements such as the need for information on the current residential address etc that needs a rethink. Many workers particularly in cities, are homeless or stay in temporary residential arrangements. Such a necessity may lead to exclusion. Then there is the question of elderly workers over 60 years of age who are excluded without reason especially when pensions are meagre and not all are linked with it.

Last but not the least, the requirement to initiate the process itself through a mobile number linked with Adhaar Card may keep away many workers from getting registered. The informality and migrant nature often force these workers to keep frequently changing their mobile numbers on account of payment lapses, and this prevents the linkage of mobile numbers with Adhaar Cards.

In all, addressing some of these issues will help in making the process easier for workers to be registered, and access entitlements and social security

While there is a mention of some schemes such as accident insurance and benefits out of Pradhan Mantri Suraksha Bima Yojana (PMSBY), the larger question is what is the overall social security package will be provided once the worker is registered. Not only has the implementation of the Unorganised Workers Social Security Act 2008, been poorly done from which lessons could to be drawn, even in the Code on Social Security 2020, there is also no specificity on what overall quantum of social security will be provided to the informal workers of India.

One hopes that the portal opens the avenue to realise the dream of every worker to get dignified social security as per the ILO convention on Social Security (Minimum Standards) Convention, 1952 of which India is a signatory and moves a step further to formalise work arrangements.

The Parliamentary Standing Committee on Labour, in its recently released its report titled “Impact of COVID-19 on Rising Unemployment and Loss of Jobs/Livelihoods in Organised and Unorganised Sectors” noted “formalising the Unorganised Sector, increasing the productivity, strengthening and upgrading the existing livelihoods and creating new opportunities should remain the major thrust areas to mitigate the impact of Covid-19 pandemic on unemployment and joblessness. The Committee also said that the social security measures need to be strengthened and made attractive. Further, the Government should explore ways and means to put money in the bank accounts of the informal workers during adverse conditions like Covid-19” /p>

We believe that this registration should not be an end, but a first step to ensure various accountabilities; one of the welfare state vis a vis establishing the identity of the “informal” worker as a maker of India, and its responsibility for social welfare, protection and security; second of the employers for their actions and contributions towards protection and advance of rights and entitlements of workers. The latter, is a missed opportunity in this mechanism.

Disclaimer: The article was originally published on APN Live. The views expressed in the article are the author’s and do not necessarily reflect those of ActionAid Association.