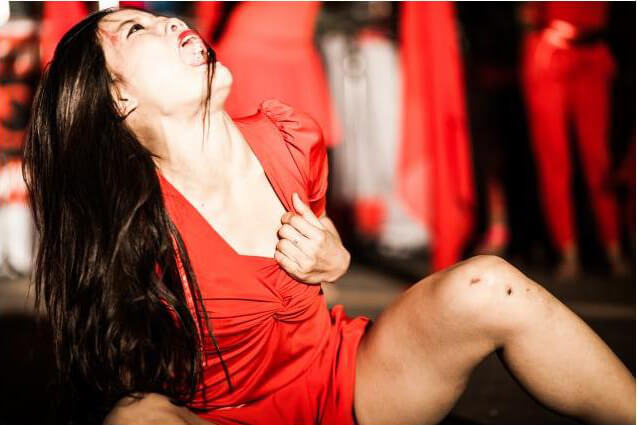 – From the movie – Purab Aur Paschim

India, the birthplace of world’s major religions, a nation also known to be the world’s largest democracy with its Constitution enshrining the right to life and personal liberty as a fundamental right, woke up on the 23rd of January to the barbaric news of a 20-year-old tribal woman allegedly getting gang-raped by 13 men in the Birbhum district of the state of West Bengal. The reason – they were apparently against her affair with a man from a different community. The 20-year-old is now in a local hospital in a very critical condition!

What I fail to understand is whether this is the kind of punishment a woman deserves for falling in love with a man from a different religion. Well, does she even deserve to be punished in the first place? If what she did was “sinful”, I can’t seem to find a suitable qualifier in my dictionary for the savagely cruel “verdict” passed by this kangaroo court a.k.a. the village council!!!

The village elders, the police say, summoned the young woman and the man she was seeing, tied them to a tree and asked them to pay Rs. 25,000 each as “jorimana”(penalty) for their relationship. The woman’s family allegedly said they could not afford the fine. The police say the woman was then forcibly moved to a small hut where she was sexually assaulted.

“The morol (village headman) ordered that I be ‘enjoyed’ by the men of the village. Following his orders, at least 10-12 people, including (some) members of a single family, continuously raped me. I lost count of how many times I was raped,” said the woman!!! When she was released, she was warned not to share her ordeal.  But her family helped her to file a police case.

“Though her condition continues to be critical, she is stable now. She has lost a lot of blood and only because she is physically and mentally very strong, she could survive the ordeal,” said an official at the hospital.

What was more spine-chilling was the kind of attitude shown by the womenfolk of the village, with a young mother of two infants – whose husband’s brother is among those arrested – saying, “She is a bad character. She was going around with this non-tribal man. We told her not to but she didn’t listen… If she dares to come back to the village, I will kill her.”  This shocking incident brings back the memory of a teenaged tribal girl being paraded naked in the same district four years ago for the same reason, sparking an outrage in the state.

A society that witnesses such crimes every single day, every single second – with some coming to light and many, many others going unreported – can that society claim to be “civilised”? Rape is a crime against the basic human rights and is violative of the victim’s perhaps most cherished fundamental right which is indeed called the right to life under Article 21 of the Indian Constitution.

Former Lok Sabha Speaker, Somnath Chatterjee said the “barbaric” Birbhum incident has made the people of the state “concerned, worried and ashamed”. “Probably even in the Middle Ages, it could not have happened… We need to hang our heads in shame,” he observed. Acclaimed Bollywood lyricist, Javed Akhtar was of the view that the issue was more of men’s liberation from a psyche of insecurity and release from an inferiority complex of being imperfect. Speaking on the sidelines of the Kolkata Literary Meet where he was attending the session ‘As if Women Matter’, he said, “As society get educated, men will be liberated, it’s more about men’s liberation.”

Continuing to talk about the right to personal liberty, there’s another incident that’s been in news since last week. A father in the state of Bihar is suing his only son for defamation after he married a woman from a lower caste, saying he has damaged his reputation. He is seeking damages from his son and wants to prevent him from using the family surname. A court will hear his case this weekend. “For ages, it has been an accepted tradition of arranged marriages within your own caste. But when my only son ended that, it not only stunned me, it also affected my social status,” the father, a lawyer from the upper caste Bhumihar group told a news agency from his home in the town of Danapur, just outside the capital city of Patna.

He went on to say that if his son continues to use the surname, he will ask for Rs. 10,000 in copyright fees each time he is known to use it. “I have simply sought the court’s directive for compensation for hurting my social reputation and for the return of my time and money that I spent to make him what he is today,” the “dad” added.

Instances such as these – some even becoming the cause of what they call “honour killings” – go on to show how deep-rooted the caste system is, in many parts of the country. It continues to dictate education, employment, land ownership as well as marriage, thereby pervading all aspects of daily life. Ironic it may sound but all this is happening in the country that supposedly celebrates its “Unity in Diversity”; diversity of religions, of their respective festivals, diversity of languages, of food, of customs, of cultures and so on. Does all this not sound super-farcical for a society, sections of which believe in going to the extent of killing their own sons and daughters just because they dared to marry someone outside their community?

Is it not high time we asked ourselves – “Is this Bharat really the Bharat of our dreams???”

Where the mind is without fear and the head is held high;

Where knowledge is free;

Where the world has not been broken up into fragments by narrow domestic walls;

Where words come out from the depth of truth;

Where tireless striving stretches its arms towards perfection;

Where the clear stream of reason has not lost its way into the dreary desert sand of dead habit;

Where the mind is led forward by thee into ever-widening thought and action;

Into that heaven of freedom, my Father, let my country awake.