Ever since the state has announced its Urban Renewal missions, we have been witnessing a series of protests and peaceful acts of resistance by urban poor across the country. History would side the fact wherever (& whenever) people have come together and made demands collectively, they have been able to influence policies, bring progressive changes to the existing power structures and assert their rights successfully.

In the cities, the dynamics of people formations [comprising largely of a migrant population who have landed in search of jobs, after being stripped of their agricultural income], coming together and forming alliances is an interesting phenomenon – both in its eclectic mix of people from varied socio-cultural backgrounds and also to identify the co-existence of each of these varied expressions in these groups.

I am closely connected to various such alliances of the Urban poor in cities; these are people who basically hold together the city’s economy but denied any role in its planning processes – rag pickers, street hawkers, domestic workers, rickshaw pullers, the list is long…very often they are denied dignified housing, identity cards, job security, access to clean water and political representation. It is this continued state of neglect that often bring them together – first as a small group and then as a larger group.

Sometimes these alliances are city specific and at times these are formed across cites focusing on various issues such as livelihoods, housing, or any other such socio-economic issue. If we take a closer look at these non-political alliances, you would see that they are grouping together either to address any (or all) of the following;- (i) on the issue of evictions and displacement, (ii) on the challenges imposed on livelihoods by privatisation (iii) to address socio-economic concerns  of the  religious minorities and groups.

The Jhuggi Jhopri Sangharsh Morcha(JJSM), in the state of Bihar, is an example of one such strong alliance which was formed after a series of evictions and demolitions were taking place in Patna on a huge scale in 2004. Residents of around 20-25 slums got together to form this group who took the responsibility of advocating with the government for the housing rights of the slum dwellers. They approached the Housing and Urban Development Corporation (HUDCO) for alternative plots for the urban poor, which were ironically not even mentioned in the master plan. However the evictions did not stop and this time the slum dwellers organised themselves under the banner of the JJSM, this time to take on the struggle for the claiming the rights of the urban poor forward. One of the notable successes of this alliance is that due to continuous advocacy and efforts of the slum dwellers there has been no evictions in the last five years in Patna.

Presently having a total strength of 37,000 members, the JJSM is constantly into mobilising communities to stand up for their own rights. JJSM demands in-situ rehabilitation and not displacement that are far off the city limits (such decisions seriously affect the communities livelihood).

They also demand patta rights over the land in which they have been residing for the past 6 to 7 years. ActionAid partner NIDAN has been working in the slums of Patna over the last 10 years to consolidate people’s institutions, processes and collectively bring out social changes at the grassroot level. The slum dwellers of Adalatganj are ready to take on their struggle for demanding patta rights ahead in the coming days.

“It is not only about getting the land in our name but also a question of our identity. We have been staying in this place for the past 15 years and are not ready to leave this place” – says Tara Devi, resident of Adalatganj. 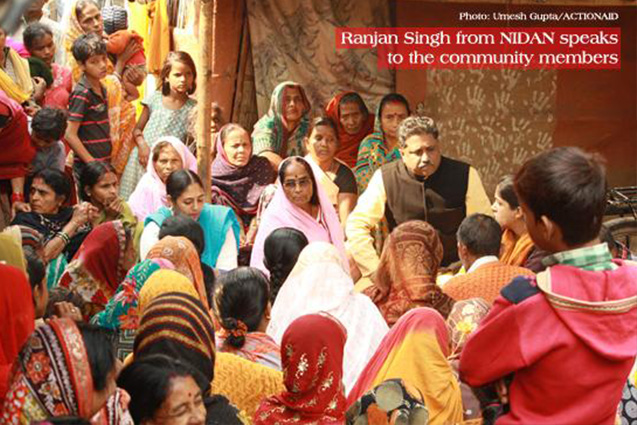 The demand of JJSM members is that they should be provided in-situ rehabilitation and not displaced to sites 30-40 kms from the city centre. Such alliances are formed in other cities such as Delhi, Indore, Jaipur, Lucknow where people’s groups have aligned with each other to carve out common channels of struggle. These processes are common & logical responses to the policies of exclusion and quite often result due to an absence of political representation from amongst the community.

If one studies the trend and causes of the formation of such alliances it can be seen that it is arising out of a sense of despair due to constant neglect from the political class and also a deep-rooted mistrust for the existing governance mechanisms.

Emergence of strong and capable youth and women leadership is often a result of such collective processes. Most of the times, groups come together on one issue but are equipped later on to address and respond to other issues as well: for e.g. groups, which begin by addressing the issue of homeless shelters later on respond and react to issues of evictions and so on. It must be acknowledged that such people’s group have led continued campaigns to change policy decisions and articulate their rights.

(Views expressed in the blog are personal and do not necessarily reflect the views of the Organisation. You can write to the author at Pritha.chatterjee@actionaid.org The Author also wishes to acknowledge the support of members of Hazards Centre in providing necessary inputs to her.)