Is your brass guilt free? 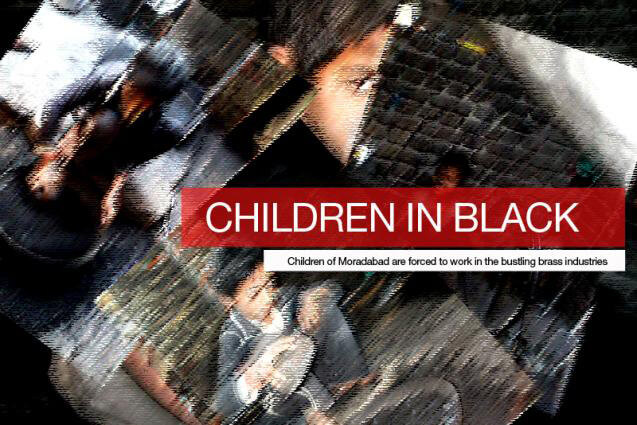 Eight year old Shahzaad smiled at us when we asked him why he does not go to school.

‘Will you take care of my 7 siblings?’, he asked as he turned back to face the furnace to get back to work.

Moradabad, also referred to as Pital Nagri because of its bustling brass industry, employs thousands of children like Shahzaad who toil for hours, in conditions so hazardous that one cannot even stand for a few minutes in those workshops. These children work here for over nine hours, every day.

As part of Sauhard Manch’s National study on the socio economic status of Muslims in India post Sachar Committee, five members of the UP team of Sauhard Manch were visiting Moradabad.

In one of those visits, one of the respondents being interviewed asked us if we would like to visit some of the Brass workshops in the area.

It was an offer we could not dismiss. Lanes lead to bylanes and we knew we had reached our destination when it became slightly difficult for us to breathe.

Covered in black completely, we saw little hands sifting hot, burning coal as we crossed one of the semi open workshop doors. The door was opened for us to enter and appreciate the work, the art and the tiny artists creating it. The children in these workshops were involved in the various stages of producing a brass masterpiece, some with their bare hands holding thick tongs and pouring hot melted ‘masala’, which practically looked like lava, into moulds, some blowing air into the furnaces and others sifting the remaining hot coal to separate the ash from it with bare hands.

Very few smiled for pictures. The rest were faces I can never forget. There were no emotions on some of their black faces, no smiles, just a blank stare with extremely emotive eyes. We spoke to some of the children, whose faces I cannot remember because of the black soot they were covered in, from head to toe, and all of them had the same story to share.

These children, aged between 8-14 were all out of school and were working to support their families. One of the boy, eight years old, did not have a father and being the eldest in the family with three siblings to feed he worked from 8 in the morning to 8 in the evening to help his mother. We were rendered speechless when one of the older craftsmen, aged 25, working in the same workshop for the past 15 years told us that if there were proper alternatives in place these children would be out in schools and not working so hard. He also told us that parents who send their children to these workshops when asked and looked down upon reply saying no parent would want to do this to her/his child, but are forced to, to save the family from starvation.

All the children we met belonged to the impoverished minority community. Keeping aside this debate about poverty and the need to work to be able to live first or Survival Vs Rights, what needs to be immediately done is to come up with effective solutions.

Merely banning the horrendous crime of child labour will not mean its eradication and may merely lead to less visibility of the same. Sometimes the best solutions come not from experts but from the victims themselves.

In this case too, during our interactions with the children, the following recommendations emerged:

(Mariya Salim can be contacted at mariya.salim@actionaid.org)