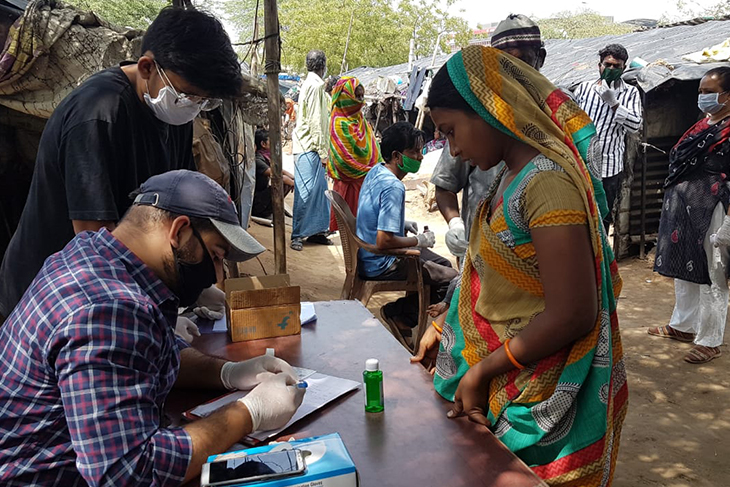 Many women are living in fear for their lives, uncertain of sustenance

India was locked down on the midnight of March 24 for a period of 21 days as a necessary measure to contain the spread of coronavirus disease (COVID-19) in the country. The prime minister in his televised address advised everybody to stay at home, venturing out only for essential supplies, and to practise ‘social distancing’.

The WHO defines social distancing as the need to “Maintain at least 1 metre (3 feet) distance between yourself and anyone who is coughing or sneezing.” An advisory issued on March 16 by the Union Ministry of Health and Family Welfare describes social distancing measures in a 15-point list highlighting the need to avoid creating crowds.

Distancing is a public health measure proven to slow or stop the spread of any highly contagious disease. But the strategy poses a big challenge to the majority—that is, workers in the informal sector. Distancing and the lockdown are imposing a heavy burden on their already precarious lives.

The informal sector employs approximately 85% of all workers in India. These workers reside in slums, resettlement areas and unauthorised colonies in urban and peri-urban areas. The housing deficit in India is estimated to be 18.78 million or 1.8 crore units, 96% of which affects the economically weaker sections of society, many of whom are working in the unorganised sector. The central government launched a ‘Housing for All by 2022’ scheme back in June 2015, but nearly five years later it has built only 3.61 lakh houses for this segment.

In fact, Dharavi in Mumbai, Asia’s largest slum settlement poses a big threat in Maharashtra, which has reported the highest number of COVID-19 cases so far. The slum is home to 1 million people living in an area of 535 acres—a density of 869,565 people per square mile. In Delhi the population density of slums, resettlements and worker settlements is around 30,000 people per square kilometre, with an average of 6-8 persons per household.

These densely populated areas offer few if any civic services to residents, whether drinking water, sewerage or proper garbage disposal.

Worker houses and settlements hold little scope for isolation, quarantine or social distancing. It is a real worry that community transmission of the coronavirus will turn these settlements into hotbeds of infection. If that should happen, India’s relatively benign looking numbers of cases and deaths will spiral out of control.

On the other hand there is the impact of distancing on residents’ ability to access essential supplies to avoid hunger and starvation over the period of the lockdown. The Pradhan Mantri Garib Kalyan Yojna is a welcome first step, but many informal sector workers are not registered with the public distribution system or with any worker welfare boards, and won’t be able to access the benefits announced so far, which in any case need to be enhanced.

Testimonies collected by grassroots community organisers from across cities show the pain and anguish of people working in the informal sector. Their names have been changed to protect their identity.

Vijay worked as a gardener in one of the high-rises in the National Capital Region. With the coronavirus making inroads into these housing societies, several people took to self-quarantine even before the national lockdown was announced.

Fearing he may be carrying the infection, Vijay’s landlord forced him to vacate his residence. He has now taken shelter with other labourers from his village, living with nine other labourers in a 10×12 foot room, sharing a toilet with 15 persons. He is no longer employed, and his due wages are also being withheld.

Promila lives her husband in a slum cluster in Kolkata. Her husband used to be a rickshaw-puller but was recently dismissed from his job. Suffering from alcoholism, he now stays at home and beats Promila. Promila thinks “It is better to be exposed to the virus than to live in continuous threat of being beaten up by an alcoholic”.

In India, one in every three women has experienced domestic violence, which can also lead to their husbands abandoning them. Many women like Promila are living in fear for their lives, uncertain of sustenance for the future.

A garment worker, Asif, works with 12 others from his village in a home-based unit in a narrow lane of the Madanpur Khadar area in New Delhi. They work during the day and by night they cook together and sleep in a shared room. It has no windows or natural light, and they use a community toilet.

As is the case with small garment workers, they are paid on a piece-rate basis. With work coming to a standstill and fears of infection looming large, their unit in-charge has been asking them to vacate the place.

Asif and his coworkers and friends have pleaded for an extension, but their problems won’t end there. With police patrolling the area asking people to down their shutters, Asif has also been experiencing breathlessness and nausea. The coming weeks look bleak, and they may have to seek refuge at homeless shelters.

The situation at these homeless shelters is also grave. Most people here are daily-wage labourers working in various sectors. With the paucity of work they are forced to stay in porta cabins, and as summer approaches the heat will become unbearable.

In such times, the capacity of these shelters shrinks, with many preferring to sleep out in the open. With the rising number of inhabitants who have been cut off from their means of livelihood, with no option of returning to their native villages, the possibility of effective social distancing shrinks.

These workers understand distancing as a form of abandonment. Their only strength, especially for those in the informal sector, is the collective or community of workers. ‘Social distancing’ or ‘self-isolation’ are luxuries they cannot afford. In fact, whether in shelters or empty bus stops they are now being forced to stay in cramped spaces in collective isolation. The spread of infection in these communities will be disastrous for them, and for all of us.

Apart from urging the state to provide immediate relief to these unorganised sector workers through cash transfers and by distributing dry ration kits and cooked meals, civil society groups are also asking for shelter spaces to be created for them.

There are demands to open up the emptied government buildings, state-run schools and stadiums to house these workers during this period. These advocacy efforts are being undertaken along with authorities in different states and are in various stages of approval. So far, several state governments have announced relief packages for workers. We hope they will take note that ‘social distancing’ is not a viable option for citizens employed in informal sector work.

Even so, as precautionary measures, communities are taking the cue on distancing from China and the western nations, developing practical solutions such as painting circles/squares at arms-length intervals on thoroughfares and in vending zones, or making hand sanitisers from the aloe vera plant found in abundance in urban settings and using it at home.

Ragpickers are banking on their age-old practice of rubbing alum and placing camphor tablets under muslin cloth to use as masks. Security guards in high-rise complexes have started using pen-sanitisers to press buttons in lifts. These small yet significant steps are helping some to stay afloat.

The coronavirus has shown us the stark vulnerabilities faced by people dependent on the informal economy. The world as we know it will not be the same after we have dealt with the pandemic. The new normal, post COVID-19, should ensure more dignified living conditions for all workers, with the essentials of life available to all as a right, and healthy spaces for all in India’s urban areas.

Disclaimer: The article was originally published in The Citizen. The views expressed in the article are the author’s and do not necessarily reflect those of ActionAid Association.