Sunda Chainpura is an unknown, ‘unwritten-about’ village in the Baran district of Rajasthan. Eklera, another obscure village, is about 15 miles away from Sunda Chainpura.  There is a reason why I am placing these two villages on your mind map of India. Today, these two villages shelter a large number of Saharia community members who have been rescued from bonded labour over the years from nearby areas.

News about people rescued from bonded labour feature in the dailies frequently. However, what we usually do not hear about (or read about) is the rehabilitation processes that follow a rescue operation. My recent visit and interaction with the rehabilitated residents of these two villages offer a good lesson in not just tackling the issue of Bonded Labour, but also in developing a brilliant model of community living; where welfare of the people are put over profits.

India passed its Bonded Labour System Abolition Act in the year 1976, nearly 30 years after our Independence. Do you miss the irony there? It took three decades for our collective conscience to pass a legislation that [at the very least] recognised and then abolished the inhuman practice of bonded labour.

But to this day, many big and small brick kilns and stone quarries of India still employ a large number of people in debt bondage. They are forced to work year after year, without any wage and in highly deplorable conditions, only to repay a debt as loan as low as Rs. 5,000 or Rs. 10,000.

Take the case of Karhulal Saharia.

A soft-spoken, frail man in his mid thirties, Karhulal (in the pic above) took a loan of Rs.20, 000 (approximately $360) from a local landlord about 10 years ago. He tells me, “We wanted to get over our troubled times & as a remedy, a local pundit asked us to perform a puja (an offering to God) at home. I took this loan to pay for that puja”

His son was 10 years old when he took this loan in the hope that his miseries would find an end.  Little did he know about what he was getting into. In return, the landlord asked him to work in the fields, without any wage, for a full year.

“We worked as long as 20 hours every day. By night, my back would break”. He recounts.

A year later, the landlord informed that the total debt amount, with interest accrued, was Rs. 30,000($545) and that his labour till then has only contributed to half of it. Essentially, he was asked to continue work for another year, in repayment.

This continued, not for a year or two, but fifteen years! Can you beat that? 15 years of back-breaking physical labour for Rs. 20,000!

In the meantime, Karhulal’s misery knew no bounds. His son died of fever and he had no money to get him treated. His wife, unable to bear the torture and harassment fled back to her village. There are allegations that she was trafficked by the goons in teh area. That’s the life of a bonded labourer.

In a country where its billionaire lists are proudly flaunted and quoted, people like Karhulal are toiling for decades to repay a loan of $300 or lesser.

Years of turmoil and violence had rendered him cautious and diffident. There were times when members of Jagrat Mahila Samiti and ActionAid had to prod him to open up and elaborate his story.

If you talk to the residents of this village you get to hear many more heart-wrenching stories like these. In July last year, a total of 135 labourers, of which Karhulal was also part of, were rescued from a local landlord’s fields. The 250 acres of land, on which they worked, were originally in their names. However the continuing debt cycle ensured that the landlord snapped up the land in his name. Thanks to the continuing efforts of the local activists and a responsive administration, these people were freed and the land was acquired back.

A lot of the times, even after being rescued these people face harassment and physical violence at the hands of the landlords and their goons. Karhulal was beaten up too. It was only after members of Jagrat Mahila Samiti filed a police complaint that the torture stopped.

“Rescuing these people from such situations was only part of the solution” , explains Saurabh from ActionAid.

ActionAid India and its network on the ground have been working with this community for many years now.

“The key is to provide sustainable rehabilitation so that they do not go back to the state of bondage”.

So how does that happen? I ask.

In Chainpura village, the statutory rehabilitation package for each rescued labourer was Rs. 20,000. However, it was soon realised that monetary compensation came with an expiry date.

“When the issues are structural, you can’t end it by just giving money. How long can one survive in that amount? You have to help them develop a form of livelihood”, Saurabh adds.

The Sub-Divisional Magistrate (SDM) of Kishanganj Block was quick to realise this gap in the rehabilitation process. He sat with the community members and discussed and deliberated about alternative models of support. In the end, through a two-way consultation process, the SDM provided a grain crusher worth Rs. 400,000 to a group of 19 rescued labourer families.

In the last season, in the 250 acre land they cultivated wheat. A total of Rs. 700, 000 was generated through sale and an additional Rs. 25, 000 by renting out the crusher. A part of that money has been kept aside as “emergency funds”. 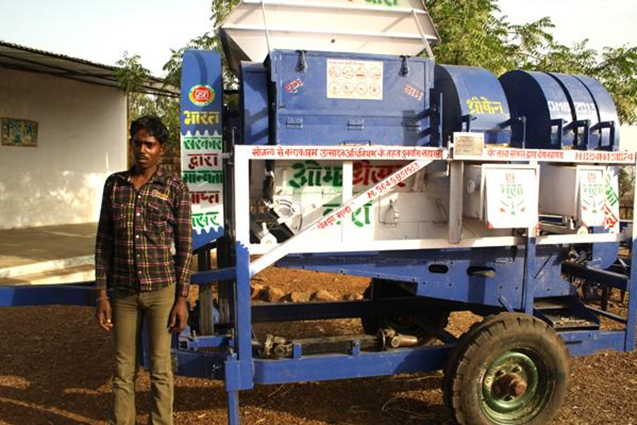 The members of the community also receive 35 Kg of rice from the Government as part of the Public Distribution System (PDS). Each family set aside 5kg of rice into the food grain bank, as a back-up during tough seasons. What is on offer here is a good lesson in food security.

That’s not all. Literacy has always been a big issue in the area. It is one of the primary reasons that kept this community in a state of bondage. For a long time, they did not even realise that they were being discriminated against. That’s how deeply ingrained & internalised the caste discrimination is, in India. But that is changing. 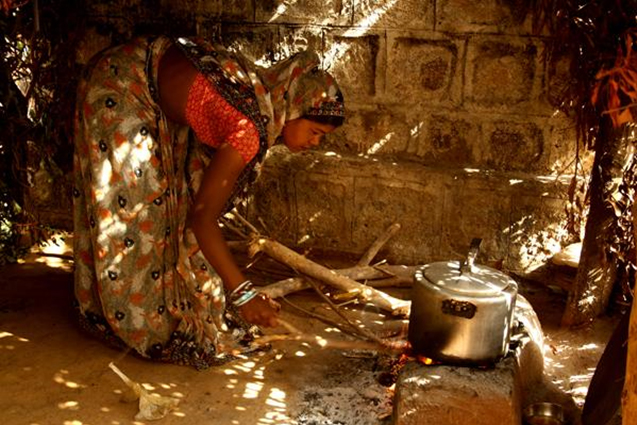 There is a Maa Badi Primary Education Centre in the locality now (Pic above). Maa Badi essentially means ‘built by mothers’.  To ensure the quality of the mid-day meal that is offered to children at this school, the meal is prepared by the parents of these kids themselves. They work in rotation to ensure that mid-meal is offered everyday and with assured quality.

It is a story of change and hope.

In a growingly desperate world, where nations are forced to sell off an island or its national forest in a bid to survive, we are compelled look for a growth model that is inclusive and sustainable. It is in these lesser known villages of Chainpura and Eklera that we have our solutions. The principle is simple. People’s welfare is prioritised over profits.

Here is a short feature that appeared on LokSabha TV, that explains ActionAid India’s work in the region. (In HINDI  W/O SUBTITLES!)