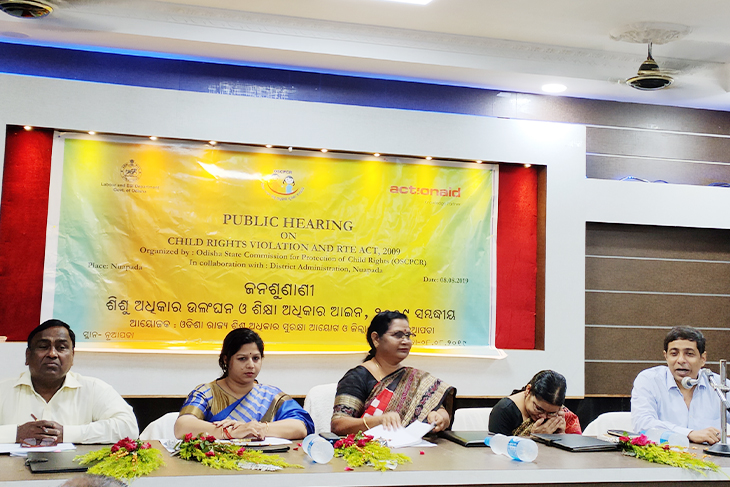 On 8 August 2019, a public hearing on the right to education was organised by the Odisha State Commission for Protection of Child Rights (OSCPCR), with support from the district administration of Nuapada and with ActionAid Association as knowledge partner helping in mobilising related cases from the field and helping in the process of resolving them. As many as 30 cases were heard by the Commission on the day of the public hearing. Nearly 70 people from various departments of the government as well as from the community joined this public hearing.

At the outset, Ms. Sandhyabati Pradhan, Chairperson, OSCPCR, thanked the district administration for extending their support. She shared that the Commission had organised this public hearing to address the issues related to child rights and to ensure that children get access to education and other services which help them grow, as equal citizens of the country.

Ms Madhumita Sahoo, the Collector and District Magistrate outlinined the situation in the district saying, “We are very vigilant and are working collectively to make the system functional towards addressing the issues related to child rights. Migration is a big challenge that the district has been facing. Furthermore, the nutritional status of children is yet to improve. We are also trying to streamline the various schemes and programmes of the government in order to improve the livelihood status of people.”

Mr. Harihar Naik, member OSCPCR, referred to the cases taken up by the Commission suo motu from media reports and the cases filed by complainants on the same day. He also shared many success stories of how the district administration can work effectively on addressing the issues of children from other districts. Ms. Dibyaa Saswati, member OSCPCR, asked for response from the concerned authorities to facilitate the court in giving directions to the administration in ensuring rights to children.

Mr. Satyajit Sen, Registrar of OSCPCR, facilitated the process of haziras (official presence) of concerned respondents of the cases and ensured submission of the action-taken reports and other requisite documents by respondents for further passing of judgement and orders to various departments of the district administration connected with cases heard in the camp court.

Mr. Sandeep Chachra, of ActionAid Association commended the OSCPCR for its plan to organise such public hearings throughout the state under the leadership of the Chairperson. He spoke in detail about how child rights are at the centre of ActionAid’s strategy. He also shared about ActionAid’s efforts in bringing issues from the grassroots to the government as well as constitutional bodies like child rights commissions, emphasising also on the need for collaboration.

He stressed upon establishing and maintaining a mechanism of identifying and tracking vulnerable children and facilitating their access to education and other services of the government. Also, he urged to set up complaint-boxes in hostels as part of the grievance redressal mechanism and to undertake social audits in hostels for strengthening their functioning. The complaints collected could be subsequently communicated to the OSCPCR for redressal, he added.

Ghasiram Panda, of ActionAid Association, observed that the administration needs to start a process of reopening of schools by identifying areas with natural barriers like rivers, streams and forests that prevent students from going to a distant place. He brought attention to the fact that in order to implement the order of the government regarding provision of the escorts allowance, work needs to be done to ensure the identification of students and collection of their attendance records in school.

ActionAid Association has been doing similar work with commissions in other states like Rajasthan and West Bengal. “We feel that it is our responsibility to extend our support to agencies like yours. ActionAid is working in Nuapada for a long time now. The district faces a lot of issues and those can be addressed through our collective efforts,” said Mr. Sandeep Chachra.

Promoting children’s rights to education, nutrition, protection and overall well-being plays an extremely crucial role in ensuring that children’s participation as equal and political citizens. ActionAid Association has been working towards building the agency of children through formation of children’s clubs, thereby providing space to children for joyful learning and to share their issues. Furthermore, forums such as child parliaments enable children to confidently raise their issues and assert their rights. As part of our efforts to protect and promote children’s rights, engaging with child rights commissions is very important in order to strengthen existing systems and make them functional. This public hearing organized by OSCPCR and district administration, Nuapada, helped in bringing forth several cases of child rights violation and saw discussions on the wide-ranging issues affecting children.