We need the best potatoes, mind you!

December 18th 2012. The train was fast approaching Bolpur, a popular town in Birbhum district of West Bengal, about 180 kilometres away from Howrah. Not an early morning riser, I was still cuddled under my blankets when the train pulled over at the station.

From inside the trains I could barely see people on the platforms. The whole area was covered in thick smog. One glued to the other, we somehow found our way out of the station. My colleagues and I were here as part of an appraisal process with one of our partners in the region, CSRA – Centre for Services in Rural Area. At ActionAid India, we have been partnering with CSRA on a short-term project that studied the status of small and marginal farmers in West Bengal.

On our way to the hotel, Pratim  from CSRA  tells me,

“Potato is one of the major crops here. The past few years have been really tough – bumper crops but falling prices”, he took a deep breath to continue, “The demand came crashing down and there was a time when one kilogram of Potato was not selling even at Rs. 1”.

The small and marginal farmers who produced it in large quantities had no means to store it, nor could then afford storage facilities.

“So it was all rotting on the roads”, he added.

None of those farmers were able to recover their investments. Mounting debts, adverse climate, degrading quality of the land, lack of any Minimum Support Price from the Government was literally pushing these farmers to the edges of desperation.

“Large corporations saw an opportunity here” Pratim says, “They provided seeds of foreign variety, technological and other regular support and then bought back these potatoes at a fixed price – Rs. 5 or Rs. 6 a kilogram. Since this offered a guaranteed income, however nominal, most of the farmers gave in to the pressure. The company, however, was obsessed with quality standards of the International market. Hence they would only buy the ‘best’ potatoes – same shape and sized ones – leaving the rest of it to rot again. This is now the trend in the South of Bengal these days. Large corporate farming is taking over and these small-time farmers are forfeiting their lives to them”.

I nodded and recounted a recent article that noted the growing shift to corporate farming and how it is putting a lot of small and marginal farmers out of the jobs. It cited a fact that the 400 odd million people are now facing a larger-than-ever threat from big farming entities and would soon be found wandering for livelihood. Where would they go? Which sector in the world can absorb such a large work-force?

Anyway, this is not what I actually intend to emphasis in this blog. So back to that!

Power in people and their indomitable spirit

We were all here in West Bengal this time, to appraise CSRA and see if we could get into a long-term partnership with them. As part of this, the next day we would all travel to Md. Bazar and Rajnagar blocks of Birbhum district, about two hours by road and closer to the Jharkhand state border, to meet members of the Santhal Tribe. The proposed project by CSRA would cover about 40 villages in the two blocks. On our way, to my bewilderment, the fog greeted us again!

Surajit who was travelling with us clarified, “ that’s not fog. It is thick white dust from the stone crushers.” – The next 3-4 minutes, as our car waded through these thick layers of dust, I could feel my lungs battling inside – I could barely breath. Later down the road, we would witness more such smog. I was worried for the locals who worked in those crushing sites.

As we crossed the Panchami Stone Crusher area in Md. Bazar, I asked the driver to pull the car over the roadside. The sudden and surprising sight of a beautiful pond, by the road was relieving, especially after those torturous ‘open gas chambers’ we had to pass through. I got out of the car and started clicking pictures of the pond on my camera, loudly announcing my delight and relief. 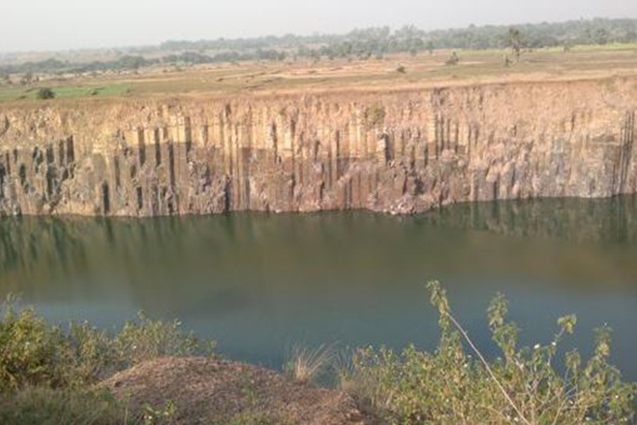 Pratim again intervened, “That’s not a pond Dipali. These are actually stone quarries that were dug-up and later left behind by the contractors. There are several such dug-outs here in Md. Bazar”.

Apparently, before one is allowed to dig into the ground, about 13 state departments are supposed to issue their clearances – that includes the land, labour, mining and environmental clearances.

However, Pratim says that the contractors here manage these permissions without any sweat whatsoever. The many rounds of blasting that happens contaminate the ground water – rendering it utterly useless for either agricultural or fishing needs.

Birbhum is one of the major suppliers of stone chips to the rest of West Bengal , mainly the southern half of the State. The government is also planning large infrastructure projects to ensure that these stone chips are exported to other neighbouring States as well. In addition to all this, coal deposits have been spotted in and around the area. An excited National Minerals Development Corporation (NMDC) has already signed an MoU with the West Bengal Mineral Development and Trading Corporation (WBMDTC) in that regard.

It is reported that the proposed Coal mining project will result in displacement of more than 15 tribal villages with a population of over 2000 people, not to mention the adverse effect it will have on the local environment and ecological imbalance.

So for the Santhal Tribes in the area, it is a double whammy – first you set up illegal stone quarries in and around their lands. Then through constant blasting you kill the fertility of the land, rendering it absolutely unreliable for livelihood and thereby forcing these poor tribals, who have only done agriculture all their lives, to rent out these lands to the large mining contractors, for negligible returns. Sooner, these people are either forced to work as daily laboureres in these quarries (ironically on their own land!) or are forced to migrate to other states in distress. For those who stay back as daily laboureres, there is no formal/legal recognition as a labourer – that’s because the quarries are all (mostly) illegal. Thus labour rights fly out of the window. Now add fatal diseases like tuberculosis and silicosis (that come with those thick dense white dust), and you have just painted the daily struggles of the locals here.

The 5th Schedule rights of the tribals, in particular the Panchayat Extension to Scheduled Areas  (PESA) Act and the Forest Rights Act have been grossly violated. These violations have now gone to the extent where some of the well known ‘all-tribal’ villages have been strangely declared as ‘non-tribal’. Further, the area has been declared as high alert zone by the state government due to extremist threats and its location which adjoins the state of Jharkhand.

Who gets sandwiched between the State and the rebels in all this? No marks for your answer there.

We met Rabin Soren, leader of the Birbhum Adivasi Ghaota, later in the day. This group was formed by the local tribal groups to address the exploitation and discrimination they faced at their work sites and also to highlight the atrocities inflicted upon them by the rebels and the state in the ongoing battle for supremacy.

One of the highlights of their resistance has been the successful closure and sealing of 147 stone crushers in the Panchami Land – all of them posing serious environmental damages. This was in 2008. 49 of these sealed quarries later were allowed operate under strict sanctions. Today, this organisation is spread across 19 blocks and has 15000members. Rabin explains,

“This is the first time in the last over 60 years of independence, that we have an organisation of our own. The backlash and confrontation between the employers and the tribal workers continues on and off. People from distant villages contact their block leaders whenever there is any incident of atrocity or exploitation. Information is relayed to all other tribal villages using traditional tribal messaging systems like dhols (drums) and messengers. It takes just few hours to bring together people in huge numbers from all across. The plan of action is then decided and acted upon”.

Today, this Gaota (organisation) has activated MNREGA for the villagers, helped many villagers obtain their BPL cards, advocated with local health departments to treat for tuberculosis and silicosis, and is now insisting for safety gears for people working in quarries. 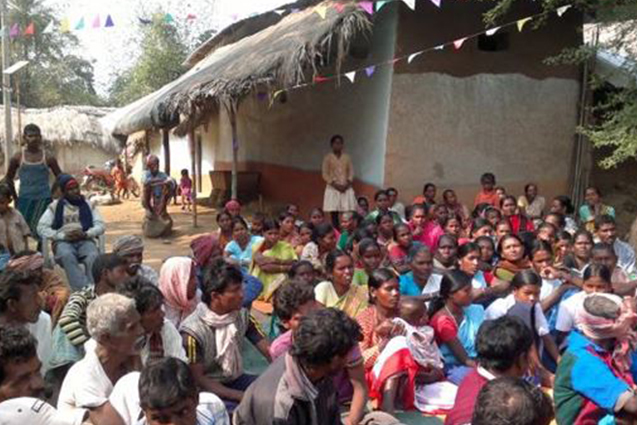 What do you want to change in your village? One of my colleagues ask a fellow member of the group. She responds “Timely availability of ration and education for our children”. Infact, I noticed that none of the members mentioned wide roads or electricity. During the day, we sat with the members and critically analysed and introspected on the opportunities gaps in their working strategies.  However, I was absolutely awed by the indomitable spirit of this group of people, who barely had two square meals a day to stay together and claiming their right to a dignified life.

On the eve of our return from Bolpur to Delhi, we spent some time at Shantiniketan (now called Vishwa Bharti University) – the world-famous school set up by Sri Rabindranath Tagore. The campus was abuzz with activities. ‘Poush Mela’ , a very popular festive event that attractedthousands of tourists, artisans, traditional and folk singers, dancers etc, was only a few months away. Several songs and poems of the legendary poet were being played out in the small speakers across the narrow lanes. The magnificent Prayer Hall was bringing back a sense of reverence and nostalgia in our group.

I was thinking to myself about the sheer richness of culture and heritage here. Set up by one of the most revered and noble personalities of the sub-continent, this place and its teachings emphasised on a strong spiritual relationship that existed between human beings and nature. It pained me to note that, on the same day, we had also witnessed acute instances of poverty and exploitation of people whose life has always depended on the nature. Couldn’t this place of great significance check the unrelenting human greed that was threatening to displace thousands of Tribals, barely two hours away?

The writing is out there, in bold and clear words – whether in the form of incidents like Sukma in Chatttisgarh or more recently in the kind of devastation we are witnessing in Uttarakhand – both a result of indiscriminate and unbridled practices and policies supported by those in power.  The sooner those in power realise this, the better.

While we see an increasing trend of organised as well as unorganised social resistance all across the globe, it is for the civil society to amplify the voices of such collective consciousness that consistently insists on equality and social justice and one that does not promote differences and further divisions in the society.