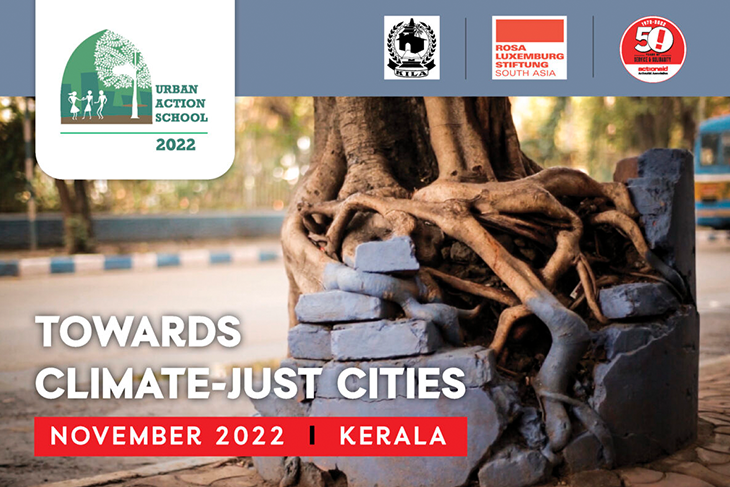 Apply now to participate in the week-long course!

Contemporary urban trends prevalent in academic and political discourses foreground the claim of an urban age because, for the first time in the history of humankind, more than half of the world’s population is living in cities. While the future of the world’s population is declared to be urban (United Nations, 2019), it is the low-middle-income countries that are going to drive the growth of the world’s urban population in the coming decades. Given that projections are that between 2018 to 2050, 90% of the urban population increase will be concentrated in Asia and Africa, conversations regarding inadequate services, equitable access, urban expansion, urban sprawl, pollution and environmental degradation will accompany the debates on future urban growth. The conception of cities as engines of development and the associated urban transition comes at a time of global momentum for action on climate change. Climate change poses significant challenges to cities – particularly those of the Global South – and has critical implications for issues of urban equity, justice, democracy and economic distribution. Burgeoning evidence of the impact of global greenhouse gas emissions and the consequent climate change on cities worldwide is undeniable. Rapid urbanisation and catastrophic climate change converge to produce a disproportionate impact on poor, marginalised and vulnerable urban dwellers. The increasing frequency, intensity and duration of extreme weather events such as floods, storms, heat and cold waves, along with slow onset events such as rising sea levels, is evidence that the climate is changing faster than expected. Population groups already vulnerable due to geography, socioeconomic status, livelihood, gender, age, indigenous/minority status, or disability are disproportionately impacted by the adverse effects of climate change in cities.

The projections hold that the share of the urban population in India will reach 54% in 2050. Urban population growth will occur when urban centres in India are still grappling with issues of infrastructure deficit, inadequate service provision and vast social and economic inequalities, compounded by emerging climate hazards. Additionally, this ‘messy’ and ‘hidden’ urbanisation (Ellis & Roberts, 2016), characterised by the poor quality of life for majorities, also emits nearly two-thirds more per person than its rural counterparts (Downes, Modi, & Shah, 2022). Thus there is an urgent need for urban-centric approaches to the visions of just transitions in India. As most of the urban centres in India will expand significantly in the coming decades due to natural growth and push migration from the rural hinterland, adverse impacts of climate change will further deteriorate the quality of urban life. While bearing minimal responsibility for the climate crisis, the urban poor, comprised of the working class and other vulnerable population groups, will continue to face a disproportionate burden of its impact. The economic and social vulnerability of the urban poor will be further compounded by heightened exposure to climate change and other associated disaster risks.

Given that cities are critical sites for climate action globally (Khosla & Bhardwaj, 2019), it is imperative to put justice at the centre of climate action in cities. Thus, the conception of climate-just cities is the recognition of the “disproportionate vulnerability, inequality, and intersections between peoples’ situations and social structures” (Boyd, et al., 2021).

While extreme and slow-onset events in cities continue to disrupt the lives and livelihoods of the most vulnerable populations, their impact in terms of loss and damages continues to be overlooked because of the limited availability of data about vulnerable groups. There is also a lack of knowledge on national-level financing and effective mechanisms for managing economic and non-economic losses and damages. As a result, the urban poor and vulnerable groups not only face the double burden of climate change and socioeconomic vulnerabilities but also pay a disproportionate share of the cost of climate action in cities. Policies for urban climate adaptation and action often exacerbate the vulnerabilities of the already marginalised and exclude them from the benefits of adaptation while burdening them with its costs. Although loss and damage are incorporated into global policy and practice through the Warsaw International Mechanism and the Paris Agreement, it remains disconnected from the compensation framework. It needs adjustment with a focus on vulnerable people and communities residing in the cities of the global south. In India, despite implementing the 74th constitutional amendment, the power of urban local bodies remains limited, and their financial and institutional capacities are restricted. The failure of urban local bodies in India to deliver on the climate change front poses significant risks for vulnerable urban dwellers. In addition, the recent discourse on urban development in India, such as smart cities and the associated governance models driven by special purpose vehicles and parastatals, further undermines the power and capacity of urban local bodies.

Calls for compensation at international climate negotiations are an extension of calls for reparations for affected vulnerable populations. Both demands are intrinsically linked to the language of the climate debt. Such debates regarding the framework for loss and damages about compensation and reparations have to be contextualised to cities within the framework of urban climate justice.

The unequal manifestation of the climate change impacts in the cities reflects the urgency to include climate justice in the longstanding urban equity agenda focusing on community-led and local urban climate justice action. We need fair, creative and multidisciplinary approaches to justice and equity embedded in collective practices and actions. UAS’22 Towards Climate-Just Cities is an effort to further the agenda of social, ecological and environmental justice in urban climate action by deliberating on the following questions: