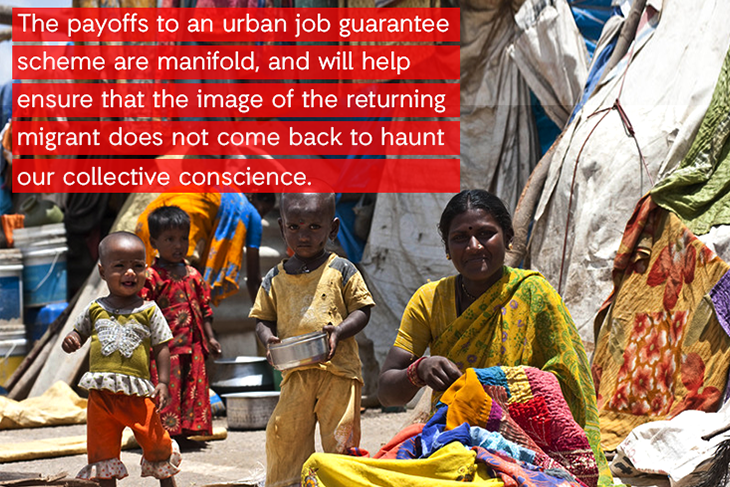 The returning migrant was the defining image of the first wave of the novel coronavirus pandemic in India. The declaration of lockdown in March 2020 led to sudden loss of income and job loss in nearly all major cities. As a result, migrant workers, the overwhelming majority of whom are in the informal sector, were forced to return to their native places, some even making the journey of thousands of kilometres on foot.

ActionAid Association’s first round of the National Survey of Informal Workers in May 2020 revealed that 78% of the informal workforce had lost their livelihoods due to the lockdown, with 90% of urban respondents being unemployed. The second round of the survey conducted in September 2020 saw signs of recovery, but unemployment rates remained high at low levels, and underemployment seemed to be an ascendant phenomenon.  Unemployment data put out by the CMIE resonates with these findings. Urban unemployment ranged from 12.7% in May-August 2020 to 7.8% in September-December 2020, rising to 9.6% in May-August 2021 and settling down to 7.2% as the 30 day average on 9th November 2021.

The Mahatma Gandhi National Rural Employment Guarantee Scheme has served as a fallback mechanism for thousands of rural households left jobless and low income due to the COVID-19 induced lockdown. The scheme provided livelihood to more than 7.5 crore rural households in the financial year 2020-21, against 4.8 to 5.5 crores people annually in the preceding five years. The initial allocation of Rs. 61,500 crores for 2020-21 had to be revised to Rs. 1,11,500 crores for this year following the COVID-19 migrant crisis and people seeking refuge in the rural employment guarantee.

The success of the NREGS program during the COVID-19 pandemic as an effective safety employment mechanism utilised by thousands of rural poor households during the lockdown led some state governments like Himachal Pradesh, Jharkhand and Odisha to start the urban employment schemes last year in their respective states.  Tamil Nadu has also recently announced a plan for such a program in their state. In addition, it has widely been reported that the Ayyankali urban employment scheme of the Government of Kerala proved immensely helpful to families whose economic hardships were exacerbated by the fallout of the pandemic.

The demand for an urban employment guarantee that has been a longstanding one by workers organisations, civil society formations and researchers alike, given the precarity of job and income security for the urban deprived communities, gained traction due to the economic fallout of the pandemic. In its August 2021 report, the Standing Committee on Labour stated that a national urban employment program is imperative. For the past couple of decades, India has witnessed a declining jobs-to-GDP ratio, which economists have termed “jobless growth”. Urban unemployment, especially among the younger generations, has been an issue for a long time and has featured in poll manifestos of all major political parties. The Centre for Economic Sustainability of Azim Premji University dedicated its State of Work Report 2019 detailing the contours of such an urban employment guarantee scheme. Earlier in 2019, ActionAid Association had also worked the contours of this programme from the perspective of green employment.  It is high time that serious efforts are made to develop and bring out the Act that will help provide a guarantee of work and social security to the urban poor in the current uncertain times cast by the pandemic. The National Employment Policy, which the Union Government is currently working on, should include a National Urban Employment Guarantee Program to ensure a dignified livelihood for the urban poor.

Urban employment schemes are also critical to achieving SDG Goal 11 of making cities inclusive, safe, resilient and sustainable. The labour under the scheme can build and develop urban commons like parks, water bodies, forests, and public services like public housing, schools, and hospitals, providing work to those who need it and making these services affordable and accessible through appropriate policy framework and departmental convergence. Learnings from MNREGA suggest that it has immensely helped women at times of distress by putting some money in their hands and building confidence. Many suggest that care work, both childcare and elderly care, should be included in the list of sanctioned works that can provide incomes and decent livelihoods to scores of women who do this without pay. When the economy is just beginning to rise after the slump caused by the pandemic, infusing this investment will help bring cash in the hands of the urban poor and will contribute significantly to raising consumer demand and give the required boost to the economic activities.

The solution is not a simple transplanting of the MGNREGA to cities, and some questions require deliberation as complications need resolution. The urban labouring poor are a dynamic community composed of long-settled urban poor dwellers and the cyclical migrant population who come to cities for specific durations in search of work. Urban areas also see workers from peri-urban areas who travel daily to cities for work.

The issue of urban local governance in the administration of the urban employment programme will also need to be resolved. Panchayati Raj Institutions have played a vital role in the Rural Employment Act. However, Urban Local Bodies have not as yet evolved in terms of local governance processes.  Further, in many cases, the ULBs are often overshadowed in many of their functions by other parastatal agencies like a district housing or water board or a metropolitan development authority that the state governments run.

The design of the urban job guarantee scheme should therefore cater to the unpredictable nature of patterns of urban unemployment, unlike rural un/employment, which is cyclical and depends on the local agricultural seasons. It should define who will be eligible and spell out the types of work included in the scheme, indicate where the financing will come from, and show how local government institutions will implement and monitor the scheme. The states that have taken the lead in implementing urban employment schemes can provide valuable experience. So their achievements and shortcomings need to be thoroughly analysed to create a good program with a robust administrative mechanism for implementation at the national level.

What is needed is a political will to make good the promise of Article 14 of the Constitution of India – securing the right to work in our country. The payoffs can be manifold and much needed to protect vulnerable informal workers in urban areas and ensure that the image of the returning migrant does not come back to haunt our collective conscience.