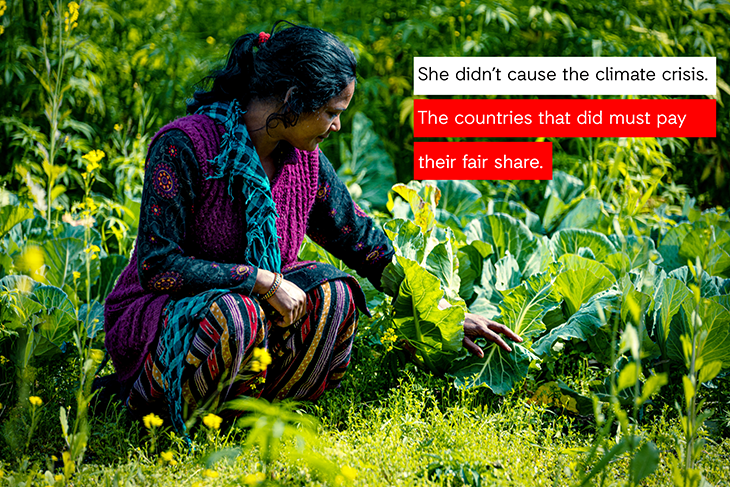 In India, sizeable populations are dependent on ecological resources – be they forests, pasture lands or even water bodies like rivers, lakes and ponds

The annual Conference of Parties, organised to bring meaning to the United Nations Framework Convention on Climate Change, is another occasion to focus attention on the issue of climate change. ActionAid, a global federation working for a world free from poverty and injustice, used the opportunity to hold governments and polluters accountable for climate justice. A dip-stick survey of 1,001 adults across Vietnam, Brazil, South Africa and India was organised, and the results were telling. 93% of respondents say world leaders need to do more to place the needs of people in the Global South at the heart of solutions for the climate crisis. Nearly half of respondents (47%) think that the Global South is being excluded from the COP26 climate talks, despite that three-quarters (75%) believe that people from these regions will be most impacted by the decisions made at the summit.

The results from India are in line with the other countries. This is not surprising as the devastating effects of the climate emergency are already being felt in India. Furthermore, the responses to the study by Opinium Research conducted on behalf of ActionAid align with the understanding that ActionAid Association has gained from its engagements with building resilience with vulnerable communities in rural and urban areas in India.

In India, sizeable populations are dependent on ecological resources – be they forests, pasture lands or even water bodies like rivers, lakes and ponds. An estimated 250 million people live in and around forests; of them, 100 million are tribals. There are 34 million pastoralists who keep cattle, goats and sheep. There is some nine million fisherfolk – this includes both marine and inland fisherfolk. These numbers increase exponentially when we include small farmers and agricultural labour, whose livelihoods depend on the weather. Their living conditions grow more precarious with climate change creating more frequent instances of extreme weather.

In 2015, a severe heatwave, also called a “steam wave”, led to 3,500 deaths in the Indian sub-continent. A 52% rise in the frequency of cyclones over the Arabian sea has been reported by Indian scientists, impacting several coastal areas, including towns. If measures to limit global warming to below 2 degrees centigrade are not embraced, as per an ActionAid report, more than 62 million South Asians will be forced to migrate out of their homes by 2050, more than treble the number in 2020.

ActionAid Association’s study with pastoral communities was published in 2014. The report “Crisis of Commons” shows how common property resources, which constitute all resources meant for the common use of villagers, collectives or a community without any exclusive individual ownership or access rights, has for the last several decades, eroded mainly due to diversification of land use, inadequate legal and policy support, non-eliciting community institutions for their protection and management, non-regulation of encroachments, non-recognition of rights of pastoral communities.

The need for people-centric action was also highlighted in an unpublished study of social and ecological issues in Hingalganj Block, North 24 Parganas, West Bengal. The study area falls in the Sundarbans, the single largest mangrove forest in the world, which act as a shield to protect human settlements from the impact of cyclonic disturbances, and other storm surges and gusty winds. The region faces a number of threats to the ecological integrity of the forest ecosystem. Altered land use, the establishment of industries, pollution from upstream urban waste and industrial effluent, increase in the frequency and magnitude of cyclones has led to the rise in the salinity of the water and soil and shortage of fresh water supply.

The communities facing this crisis need to be drawn into the struggle against climate change. Prime Minister Shri Narendra Modi’s call for $1 trillion from developed countries as finance for developing countries to lessen the impact of climate change through mitigation and adaptation measures should be used to draw these vulnerable communities, led by women, into climate change practices.

We cannot solve the climate crisis without listening to the voices of communities in the Global South. We need leaders from the world’s wealthiest countries at COP26 to listen to the expertise and experience of frontline communities and provide support to scale up their response and resilience. We need to do more to bring the voices of those most affected and least responsible into the climate change discourse. We need to encourage these communities to fulfil their role as custodians of ecological resources to ensure their well-being and the good of the whole world.

Disclaimer: The article was originally published on Outlook India. The views expressed in the article are the author’s and do not necessarily reflect those of ActionAid Association.