‘We have the right to live with dignity like anyone else’

A grandmother and a mother of four, Shanti does not appear to be over 40 years. She and her husband Shanker sell Chhole Kulche (one of the popular north Indian street food) at the market near the National Zoological Park in Delhi.

“This is the only source of our income. But we face many problems. As we are selling food items on streets, the local Police and Municipal Council of Delhi (MCD) officials force us to shift all the time. Whenever there is a VIP visit, we are forced to remove our shops to move to another place, which badly affects our daily earnings,” Shanti says about the daily struggle of being a street vendor.

Shanti is now the head of the Zoo Market Welfare Association, one of the hawkers’ associations in Delhi associated to the larger Hawkers Federation of Street Vendors of the state. Nevertheless, she says, they have to pay penalties very often as many of them do not have the license.

“We all have applied for the license but no one has gotten it yet. Through the Hawkers Welfare Association and Hawkers Federation of Street Vendor, we all are associated with Janpahal which supported me and other leaders to raise our problems before the authorities,” she describes.

Dharmendra Kumar, Secretary of Janpahal, says: “In 2014, the Street Vendors (Protection and Regulation of Street Vending) Act was passed. According to this act, every town has to constitute a town vending committee and all existing street vendors have to be surveyed and subsequently registered and provided vending licenses.

“Subsequent to this Act, the Government of Delhi notified the Street Vendors (Protection of Livelihood and Regulation of Street vending) Rule and Scheme in 2015.  However, many provisions of the rule and scheme were not in favour of street vendors. So, we further advocated with Delhi government and the amended rule and scheme was notified in January, 2016.

“The amended rule and scheme of 2016 dropped contested provisions including timing of vending restricted from Sunrise to Sunset, prohibition on cooking in streets, prohibition of electricity/water connection on vending site and prohibition of vending within 100 meters of any place of worship, educational institute, hospitals, railway stations and foot over bridges.”

According to Shankar, Shanti’s husband, he has been working in that area for quite a long time. Earlier, he used to sell fruits and after their marriage, the couple started selling Chhole Kulche for their living.

“This shop is the only source of our earning. But we are never allowed to run our shop peacefully.  Not just the police or MCD officials, we also face constant threat and intimidation from the owners of the food courts inside the Zoo,” he informs.

Concurs Premvati, “I sell vegetables and fruits here (near the Zoo) since long but nothing has changed in all these years.  While I am forced to pay the police sometimes, it is the MCD officials who want me to pay them for putting up the shop here.”

“Many a times, I am asked to relocate which adversely affects my livelihood,” adds the 60 year old, who daily travels a great distance with a big crate from home to the market.

Similar is the story of Nemsingh, another street vendor who originally hails from Uttar Pradesh’s Etah district. “We had no option left. There is nothing left in my village to earn and survive. We did not have land there. So we had to migrate here. I thought it is a big city, I will find some work to earn and live. But difficulties are not less here also,” says Nemsingh who sells toys and other stationery items in the market.

Street vendors constitute an important segment of the urban population. Thousands of people from different part of the country migrate to cities like Delhi to earn a livelihood. And to regulate street vendors’ activities and protect their rights and livelihoods, Indian Government had enacted the Street Vendors (Protection of livelihood and Regulation of Street Vending) Act 2014 that aims at securing right of the citizens to have adequate means of livelihood without harassment from any quarter.

Civil society groups and community and labour based organisations like Janpahal are working tirelessly to safeguard their rights and enable them through legislative framework or guidelines to pursue an honest living with dignity.

“But the system doesn’t allow you to pursue your living with dignity,” says Kalyan, an artist who hails from neighbouring state of Haryana. 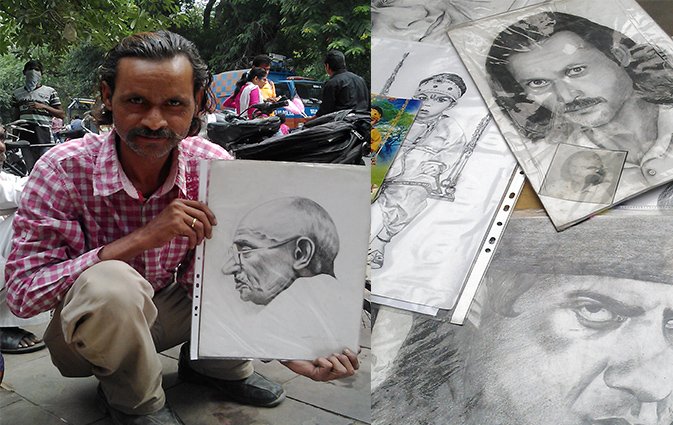 Kalyan with some of his arts

“Sketching was my hobby and my passion since childhood. But my poverty did not allow me to get enrolled into any institution. I came to Delhi and now using my skills to feed myself,” he says, adding that he has “to shift from one place to another and even I am forced to pay the officials”.

With support of Janpahal and ActionAid India we have been fighting for our rights and I am sure soon our efforts would see the light,” says Shanti.

“We have the right to live life with dignity like other.”