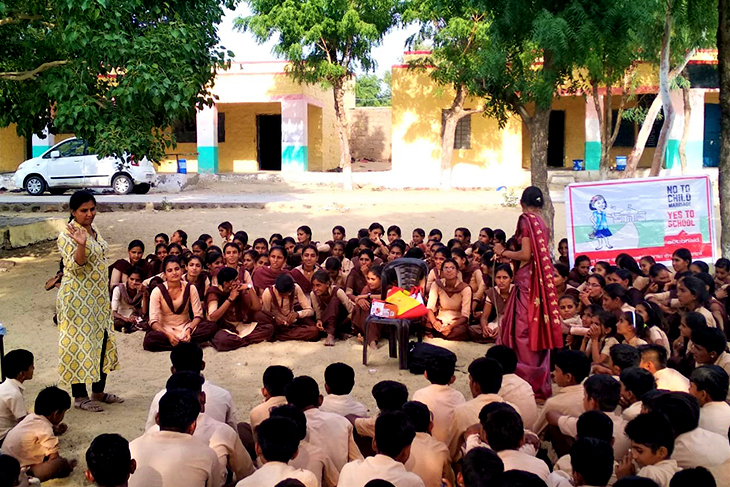 “How can we take the pledge against child marriage when we are already married?”, asked a student in a village school in Barmer district.

In the district of Barmer, Rajasthan, we heard an unbelievable story, that children as young as 10 months were being married off. We were told that this practice of early child marriage was quite rampant, especially observed as part of the mausar ceremony. Mausar is a cultural practice in Rajasthan where, on the event of observing the death of a family member  –  in which ceremonial rituals extend up to a period of 12 days, the twelfth day is marked by a feast in honour of the deceased, as well as a marriage. This is a practice amongst the Jat and Bishnoi communities of Rajasthan, and is seen as a marker for the ritual cleansing of the household after a death within the family.

Families spend huge sums of money on the mausar ceremony, some even taking loans for the same. As part of the ceremony, a child within the family is married off irrespective of their age. Pre-adolescent girls live with their parents, her parents’ home till the gauna ceremony, which traditionally occurs after the child bride begins her menses. While the child brides remain in their parents’ homes, they either discontinue pursuing their education or are discouraged by their families from continuing it. Thus child marriage compounds the injustice done to the girl child, by depriving her of education and her made to take on traditional gender responsibilities much too early in her life..

As per the Prohibition of Child Marriage Act, 2006 (PCMA), marriage of a girl aged below 18 and that of a boy aged below 21 years is considered as a cognizable offense. Comparing the data of National Family Health Survey (NFHS)-3 (2005-06) and NHFS-4 (2015-16), one finds that the overall prevalence of child marriage in India has reduced to a large extent. According to NFHS-4, in India, 27% of women aged 20-24 years got married before the legal minimum age of 18, down from 47% as per NHFS-3. Rajasthan too saw a decline; as per NFHS-4, 35% of women in this age-group got married before 18 as compared to 65% as per NHFS-3. However, despite the decline in numbers, nearly 1.5 million girls in India are child brides.

Additionally, as far as statistics on child marriage are concerned, a report released by the National Commission for Protection of Child Rights (NCPCR) in 2018 on India Child Marriage & Teenage Pregnancy (based on NFHS-4) found that Rajasthan has a 16.2% prevalence of child marriage which is very high compared to the national average of 11.9%. It also reported that although the state recorded more than 20% reduction in child marriage, it, however, still ranks among the top 12 states. As far as the rural versus urban debate is concerned, it was found that the prevalence of girl child marriage was more common in rural areas than in urban areas. It was also reported that the wealth index of households is significantly related to child marriage, with poorer households marrying off girls early. As we all know, there is also a correlation between child marriage and the educational attainment of girls; they are inversely proportional to each other, i.e. higher attainment of education leads to a lower rate of child marriage. It is important to note that the social evil called child marriage results in girls missing from secondary schools, teenage pregnancies, worsening rates of maternal and child mortality and an increase in cases of anemia amongst women and girls. In fact, child marriage also pushes these girls and boys into the trap of poverty from a young age.

As we delve deeper into the issue, it is imperative to understand that child marriages do not take place in isolation but are a cumulative result of a myriad of factors. The deeply entrenched structural inequalities within the Indian society are the root cause of early and child marriage. While the roots of the practice vary across communities and cultures, some of the reasons behind marrying daughters off early include reducing economic burden, with a huge section even justifying it in the name of security and safety of their daughters. Also, the belief that marriage as an institution provides for protection of girls looms large, especially against unwanted male attention and promiscuity, as well as to ensure chastity and virginity of the bride.

Various other factors too have institutionalized child marriage. While for some, it is a tribal custom, for others, exchanging daughters without dowries in ‘trade marriages’ is an economically viable option. It is important to note that locally practiced norms and practices emanate from a range of social and economic factors and are built on inherent gendered inequities, further reinforcing and reproducing these inequalities. It should also be noted that while it is a harmful practice and a social evil, and a violation of one’s human rights; the effects of child marriage is a growing public health challenge of our times, and a human security issue associated with the burden of disease on infants, increasing child and maternal mortality rate, and extreme poverty.

With support from UNICEF, ActionAid Association has been running an initiative, ‘Strengthen institutional capacity of key district government stakeholders to enhance adolescent empowerment and to prevent child marriage’ in the states of Rajasthan, Bihar, Jharkhand, Odisha and West Bengal.

ActionAid Association has been running the  ‘Say No to Child Marriage, Yes to School’ campaign with an objective of building youth and adolescents as agents for change to bring about a transformation in social mindsets that see marriage as the only avenue for personal and social fulfillment for children, especially girls and young women. The campaign seeks to inform communities on how child marriage is a harmful traditional practice that violates child rights. It seeks to spread awareness that although child marriage adversely affects both boys and girls, it perpetuates discrimination against girls, not only denying them of their childhood but also socially isolating them, keeping them cut off from family and friends, without a support system. This also leads to a lifetime of domestic and sexual subservience. Child marriage has negative consequences on the development and full growth of the girl as it is associated with increased risks of maternal and child mortality, inter-generational transfer of nutritional deprivation, and limited opportunities for education and economic empowerment.

Jamna Bagora, District Coordinator with the project in Barmer witnessed a moment of general unease at the conclusion of the awareness session held at the Rajkiya Madhyamik Vidyalaya at village Kurja.   On hearing the call to take a pledge against child marriage, there was an atmosphere of silence and discomfort, and none of students present rose to take the pledge. The school is located about 11 kilometers away from the city of Barmer, and has classes from I to X, with 283 students out of which 153 are girls.  Acting on a hunch Jamna asked students to raise their hands if were married. Around 15 students, majority of them girls, raised their hands, admitting that they were married.  There were students as young as 10 years who had been married. One of the students came forward and said, “How can we take the pledge when we are already married?”

This was’t the only school in Barmer district where child marriage cases have been found. During the campaign, similar cases came up in three other schools in Chohtan block of the district. During orientation sessions in these schools, when students were asked if they were subjected to child marriage, several students, including those as young as 10-12 years, came forward and shared that they were already married.

Counselling sessions followed, to ensure that the awareness sessions did not lead to stigmatisation of the married children.  During the dialogue with the students they were sensitized that even if they are married, which section 3 of the PCMA Act states can only be made voidable at the instance of the child bride or child groom, they must continue to access and ensure that their partners also study, so that all can have healthy and fulfilling lives.

After the counselling sessions, every child stood up to take the pledge, not just in Kurjar, but in the other schools too.  However the what the child’s innocent question really underscored was the need for the Government at the Union and at the State-level need to initiate full-fledged campaigns, with the support of community-based organisations and religious institutions to raise awareness within communities about the harmful consequences of child marriages and build grassroots-based social pressure to fight against it.

ActionAid Association works towards ensuring that children from marginalized communities have access to their basic rights – education, nutrition, care and protection. You too can be a part of this change. Donate now towards ActionAid’s initiative, Act for Children, and help create an enabling environment for them so they may enjoy the childhood they deserve. 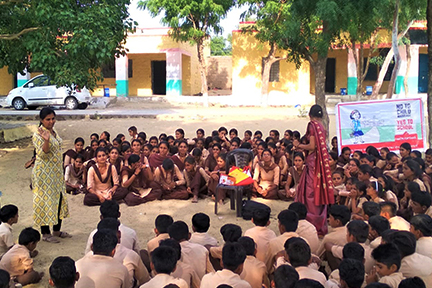