Flood response in Rajasthan and Gujarat 2017 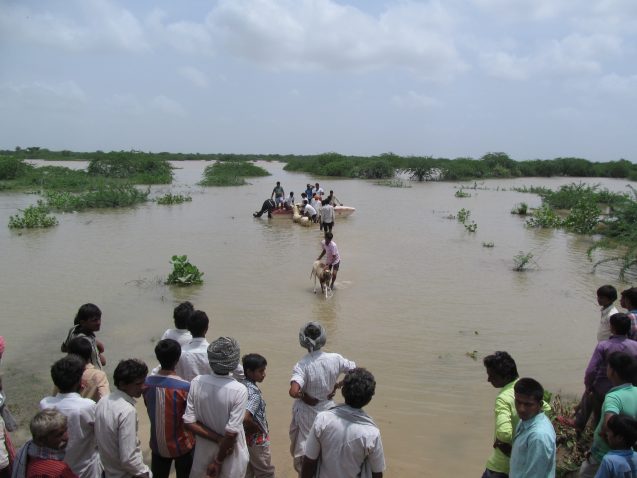 Both the states of Rajasthan and Gujarat have received the highest rainfall in a century, resulting in the flooding of 4 districts in Rajasthan and 8 in Gujarat. The affected districts in both states are adjoined. Heavy rains in Jalor, Pali and Sirohi district of Rajasthan is the major cause of floods in Banaskantha district of Gujarat, as they share a border. Heavy rains and overflowing of Sipudam and Dantiwada dam has increased the water level in Banas river which flows from Banaskantha. Due to this, the Dhanera block of Banaskantha was the worst affected block in the district. Rajasthan Jalore, Sirohi, Pali and Barmer are the worst affected districts of Rajasthan. Within these areas, 25 blocks and 290 villages are affected, or 1,25,000 people.  10,000 houses are damaged resulting in 50,000 homeless people, as well as 47 deaths, 640 rescues and 225 evacuated. More than 5700 cattle have been reported dead. 90 dams are full. Gujarat The damage in Gujarat is extensive. According to the Gujarat State Disaster Management Authority, 142 people have been died due to the floods in the State (50 people in Banaskantha district only). Electricity was impacted in 753 villages, 200 of which are still without electricity. A total of 945 roads including 6 national highways, 31 state highways, 819 panchayat level roads and 90 others are flooded or damaged. There have been reports of 2014 animal deaths. The total number of people affected, aggregated across different sources, are 171119 people affected across 8 districts. Government Response Rescue operations have involved Indian Army troops, Indian Air Force, border security forces  and both National and State Disaster Relief Forces.  There have been a total of  ten IAF helicopters and five Army columns. In addition, 18 BSF teams, 32 teams from the NDRF, 11 teams from the SDRF and local teams were deployed.  More than 117,000 have been evacuated across Gujarat and Rajasthan. Relief camps have been set up in Gujarat. A total 90 relief camps were established by government of Gujarat, who have stated that 20 lakhs food packets were distributed as part of the immediate response. In Rajasthan more than 24 camps have been created, providing the immediate relief and cooked food. As victims return home, they still need food, shelter and livelihood support. Relief package: The Government of India announced an interim relief package of ₹ 500 crore to Gujarat. It is also announced that ex gratia of ₹ 200,000 be given to the next of kin of the deceased and ₹50,000 to people seriously injured in the floods, in addition to a  1500 crore relief package announced by state government of Gujarat. Government of Rajasthan has also announced the relief package to the victims for approximately Rs 500 crores Providing non-food items (NFIs) such as water purification tablets, tarpaulins, candles, mosquito coils, etc. These goods have helped address some of the vulnerabilities faced by flood-affected communities but have been unevenly distributed and insufficient in quantity. The electricity supply was restored in 700 villages and 1500 sanitation workers were Banaskantha and Patan districts to prevent outbreaks. Carcasses have also been disposed. There has been collaboration with other NGOs in needs assessment exercises and solidarity action. Other NGOs worked with include UNICEF, UNFPA, Save The Children and Plan-India. Coordination and collaboration with the district administration as well as the state senior officials coordinating the relief and rehabilitation work for the flood victims. Civil society groups, including the media, have also been mobilised – the media regularly publishes ActionAid’s work. Students from institutions such as Tata Institute have been mobilised and accommodated. ActionAid Response Rajasthan

Further Requirements Despite progress made and fast response by ActionAid, urgent help is still required: