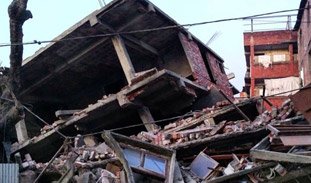 Around 8.45 in the morning on India’s 52nd Republic Day — January 26, 2001, a powerful earthquake measuring 7.7 on the Richter scale struck Gujarat. The earthquake caused over 13,800 deaths and extensive damage to properties in the state.  Damage to a lesser extent also occurred in the adjoining states of Madhya Pradesh, Maharashtra and Rajasthan in India and in Sindh province of Pakistan.

Soon after the quake ravaged the state, ActionAid India started relief and rehabilitation efforts in Kutch district, one of the most affected districts of Gujarat, through a network of eight local community-based organizations that called themselves Sneh Samudaya (Caring Community) — that came together to ensure rehabilitation within communities of the most vulnerable among the survivors of the earthquake. These included children who were left without adult protection, single women (including widows), disabled people and aged who are deprived of the care of their families. Village volunteers popularly came to be known as Sneh Karmis were selected and tasked to carry out, supervise and monitor the whole emergency response in their villages. The process of community-based rehabilitation (CBR) was an attempt to ensure the protection and rights of those who were most at risk and those who were also most likely to be forgotten in the process of relief and rehabilitation.

Our interventions covered 127 worst hit villages from four blocks –Anjar, Bhachau, Bhuj and Rapar of Bhuj district.  These villages were selected on the basis of the extent of damage, number of casualties and injuries, number of widows, significant Other Backward Caste, Dalits and Muslims populations.

To create an enabling environment for children so they could better cope with the post disaster situation day care centres were built in 96 villages that provided much-needed support to over 5,780 children. Apart from various creative and learning activities, regular health check-up andpsycho-social counselling services were provided to the children.Constant efforts were also made to sensitize government officials, NGO functionaries and local community regarding child rights particularly in the context of disaster situation.

Food and nutritional support to vulnerable families were provided till they were able to create an alternative support system for themselves. Food packets were provided on a regular basis to families who needed them the most. Care was taken to ensure the inclusion of single women without support, aged people and injured and people with disability.

With the help of Handicap International and local organizations and doctors, several medical camps were organized in affected villages. An ambulance service was also started which was equipped with physiotherapists and social workers visiting rural villages.  Psychosocial counseling was also provided to all needy persons and families.   Nearly 1000 adults and over 5700 children benefited from this support.

Interim earthquake-resistant shelters were provided to the most needy families who did not have any other support. Overall, new shelters were constructed for 565 families, while 1147 families were given material and monetary support along with the technical inputs to construct their houses. A total of 389 single women, 8 orphans, 80 old age people, 136 poor families were supported through our shelter programme.

After an extensive livelihood survey along with community consultation processes, 16 self-help groups of women and 3 of men were formed. The women groups were given certain amount from Sneh Samudaya as a revolving fund to start enterprises to support their livelihood.

Food for work programme was started with two basic objectives – to generate employment for the needy people and to create community assets through this work.  Within six months, we were able to generate employment of 22,868 person days benefiting 2,858 families. Types of work initiated included cleaning of debris, land leveling, desiltation of ponds, construction of link roads, repairing of ponds, cleaning of religious places.  All these work were carried out under the supervision of village committees.

Efforts were made to educate and make the local community more aware about their rights and entitlements. Educative processes were held to enable the community take informed decisions regarding all interventions and negotiate with external intervening agencies on equal terms. The committees actively participated in the decision-making processes at village level and also took up various responsibilities related to the rehabilitation of their own community.

Constant efforts were made to bring people together, through various social processes to collectively share their problems and grief, reflect back and take up collective action to rebuild their lives. With the help of local communities we set up Sneh Kendras (community centres) in 90 villages. These emerged as the center of all community-based interventions and were used for multipurpose activities like meeting place for villagers, recreational center, daycare center and information resource center.