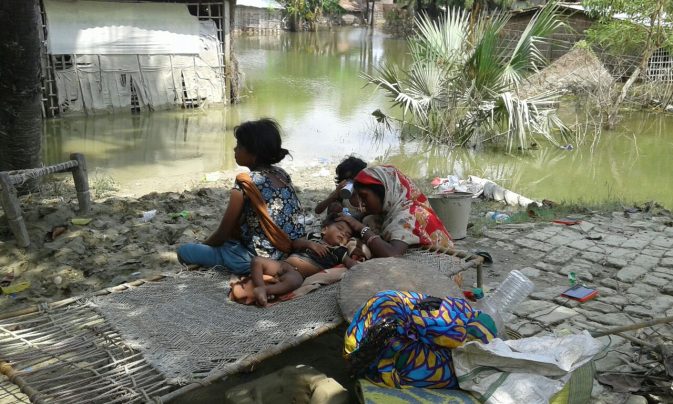 Bihar is currently facing some of the most widespread and damaging floods witnessed in India in recent memory. To date there have been hundreds of people killed and 1.40 crore people affected by flooding across 18 districts in the state. Though the Indian Government and NGOs like ActionAid India have been hard at work to assist affected areas, additional support is urgently needed to address the pressing needs of the affected population and help them start along the road to recovery. Villagers move to a safe place from floods in Gopalganj in Bihar on Sep 2, 200) Impact of Floods Floods in Bihar this August have exacted an enormous human cost on the state. Recent assessments suggest that 304 people have been killed so far, though the number of casualties could increase as heavy rainfall and flooding persist. The most affected district in terms of loss of life is Araria, where 57 people have perished, followed by Sitamadhi (31), West Champaran (29), and East Champaran (19). State and national authorities estimate that there have been an additional 721,704 people displaced from their homes as a direct result of flooding.

Beyond causing widespread loss of life and displacement, the recent floods have also impacted people in affected areas in a variety of other ways. Thousands of hectares of cropland – which the majority of people in rural Bihar rely on for their economic livelihood – have been inundated. Countless cattle, chickens, and other livestock have perished, further adding to the economic damage. Flooding has also made food supplies and clean drinking water harder to find, and moreover increased the risk of disease in affected districts. These effects have been particularly severe for dalits, women, and other marginalized segments of society. Government’s Response Government actors have played an important role in responding to the crisis by: Children looking at their home damaged in the floods in Narauli village of Muzzaffarpur district.   ActionAid’s Intervention Thus Far ActionAid has also been actively working to address the situation in Bihar by:  Immediate relief being provided to hundreds of affected families in East & West Champaran and Satamadi districts   What are the relief requirements? Though existing relief efforts have helped to address some of the needs of flood-affected communities in Bihar, additional assistance in a variety of areas is necessary. Action Aid, for its part, is seeking material support to provide the following assistance to communities that are in dire straits, especially women who are living by themselves, disabled, aged and in an area that consists of peasant population, dependent on small scale farming and informal labour.   Contacts in ActionAid India : Ms.Sehjo Singh, Director Programs (sehjo.singh@actionaid.org) , M Number – 8800129222, Ravi SK , Head, Institutional Partnership Development (ravi.sk@actionaid.org) – 9868216135, 011-40640560