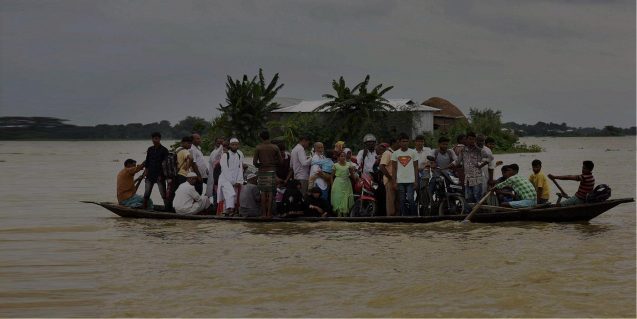 Assam is currently experiencing the most severe flooding seen in the state in over 30 years. To date, more than 3.3 million people have been affected in 3186 villages across 25 districts. Action Aid India is on the ground in Guwahati and other areas in Assam providing critical assistance, but additional resources are urgently needed to ensure that populations affected by the flooding can make a full and speedy recovery. Impact of Floods Since the beginning of July, Assam has been struck by two waves of flooding that have taken an enormous toll on communities throughout the state. The first wave of flooding was preceded by incessant rainfall caused by the combination of an early monsoon and the effects of Cyclone Mora. The floods reached their peak around July 13th-14th, at which point more than 1.7 million people were affected across 16 districts in the state. Though the statewide water level began to recede for a few days at the end of July temporarily allowing people to return to their homes, Assam was struck again by another round of deadly floods in August, the effects of which are still being dealt with today. Recent estimates suggest that the current episode of flooding in August has killed at least 180 people in Assam alone and displaced hundreds of thousands more from their homes in districts such as Morigaon, North Lakhimpur, Dhemaji, South Salmara, Barpeta, Kokrajhar and Dhubri. Flooding has additionally had a number of other consequences, including damaging/destroying countless houses and other buildings, and affecting 182,343 hectares of cropland, which has proven to be particularly problematic for the large portion of the Assamese population who are farmers and rely on agriculture for their economic livelihood. As a result of flooding, many people across Assam have moreover been left with insufficient access to food and clean water and currently face an elevated risk of diseases like malaria, cholera, and diarrhea in submerged areas. Government Response To date, government actors have responded to the crisis in Assam by:

Action Aid’s Intervention Thus Far (As on August 30, 2017) Along with local partner organizations including SSTEP, NEADS and NERSWN, Action Aid India has been taking an active role in the overall emergency response and has reached more than 2200 families in flood-affected areas of Assam. To date, our relief efforts in Morigaon district especially have included: Action Aid India has also been working tirelessly to help promote longer term rehabilitation of affected populations. These efforts have included: What are the Relief Requirements? Given the immense scale of flooding in Assam, there are still significant vulnerabilities among affected communities need to be addressed. The following requirements have been identified by Action Aid and local partner organizations as being of immediate importance:   Considering the needs of people in flood-affected areas, Action Aid and its local partners have developed plans to target villages in two blocks that have been hit particularly hard by the emergency: Chariali in Biswanath Chariali District and Lahorighat in Morigaon District.    Indicative Budget to reach about 1700 families would be as under: