Two years of deficit rainfall and failure of four agricultural seasons caused one of the worst droughts India has witnessed since its Independence.  According to government estimates, the unprecedented crisis has affected a staggering 330 million people, or more than a quarter of the country’s population, living in over 2.5 lakh villages across 11 states.

The worst affected areas were Bundelkhand region comprising of seven districts in Uttar Pradesh and six districts in Madhya Pradesh; and Marathwada region comprising of eight districts of Maharashtra. In addition a large part of Orissa – 29,176 villages 28 districts – also suffered drought conditions. It has a devastating impact on water, agriculture, livelihoods, food production and food security, natural resources and also on exchequer.

The major crises that resulted because of the drought at the beginning of the our intervention period  were: 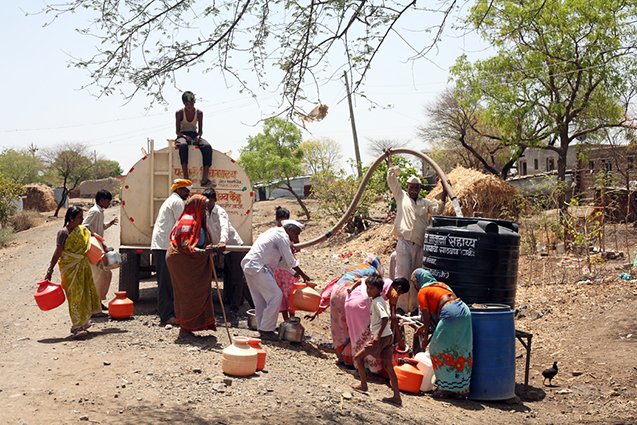 As the crisis started worsening towards the month of Month, ActionAid India together with its allied organisations started emergency relief efforts in affected villages in Maharashtra, Uttar Pradesh, Madhya Pradesh, Odisha and Telangana. Our focus was to reach out to the most vulnerable families and groups who are most affected and find it difficult to access relief services.

As part of our emergency relief efforts, we provided dry rations, facilitated the provision of drinking water, set up fodder camps and organised health camps in areas hit hard by the drought. We also focused on ensuring entitlements like PDS, ICDS, MDM, MGNREGA, and crop compensation and long term work on  water harvesting and sustainable farming systems.

We carried out drought specific emergency response in over 500 villages spread across 26 districts in six states.  The villages covered are:

Overview of our advocacy work

With our continuous liaison with the concerned government authorities, over 400 hand pumps were repaired and 33 new pumps were installed in Madhya Pradesh and Uttar Pradesh. We have helped in deepening of 34 public wells and digging 22 new ponds in Madhya Pradesh.

Public Hearings at district and state levels in Madhya Pradesh, Odisha, Uttar Pradesh and Rajasthan were organised focussing on drought in the month of June.

A national consultation on drought was held (20th May 2016) in Delhi which was attended by civil society organisations from 5 drought hit states along with many donors and INGOs and rights organisations.

Active engagement in larger campaign of social movements in the country, including 10 days of  Jal Hul Yatra in Maharashtra, Bundelkhand regions of Madhya Pradesh and Uttar Pradesh and 3 days in Telangana state. Our partners and communities were actively involved in mobilisation and public action in all the states covered under the campaign.

Along with our allied organisation, we have been monitoring the implementation of social security schemes like Public Distribution System (PDS) providing subsidised grains; Mid day Meal (MDM) being provided to the school children (during summer vacation); and supplementary food and nutrition provided under Integrated Child Development  Services (ICDS) etc.

We have been engaging with the state governments to ensure provision of drinking water, repairing of bore-wells, community kitchens, dry ration kits, fodder provision, etc.