Happiness is in Sharing: My Volunteering Experience at ActionAid Centre
+91 80 25586293

When I was around four years old, my parents introduced me to Legos. Initially, I used to build small sets. I was always interested in building things with the Lego blocks. Once I completed building a set, I would play with it for a while and then start building a new one. I also had lots of Lego pieces which I used to build things without instructions. It gave me ideas to build my own models. When I grow up, I want to be an inventor. I also like to play Minecraft game on the computer.

My parents have always taught me to help others and share things; I always share my Lego sets with my younger sister who likes to play with it. I also taught her how to build small sets. I wanted to use my knowledge and experience to introduce and teach Lego to the kids of all ages. When I visited Chennai, Tamil Nadu, last summer with my family, I informed my parents about my interest in volunteering my time to teach Lego to kids. My dad got in touch with his friend, Mr. Sujit Tharakan, who introduced us to Ms. Esther Mariaselvam, Regional Manager, Tamil Nadu Regional Office, ActionAid India. Through Esther ma’am, I got an opportunity to volunteer at a children’s centre supported by ActionAid in Chennai. My parents got some Lego sets which we wanted to use with the students at the centre. Prior to starting the volunteering, I was worried about how I would communicate with the students or answer their questions. My dad agreed to help us in the translation from Tamil to English and vice-versa.

The centre we visited was run by Thozhamai, an organisation that works for the rights of children, young people and women from the socially deprived communities, and is a long-standing ally of ActionAid. When I visited the centre, I was surprised to find that a lot of students (both girls and boys) were eager and interested in learning Lego. I briefly introduced myself to the students and told them about the benefits of learning and playing with Lego. I got help from the in-charge of the centre and we organized students in different groups. We had bought multiple sets of the Lego Creator 3-in-1 model. We gave one set to each group. I was helping one of the groups understand the instructions so they could follow them properly. I also informed the class that they should keep all the parts safe as they would be used to build a different model the next day. Once I started to show the initial steps to one group, they  started working on it by themselves. I went around and checked and verified the models being made by other students in the class. In the end, all the groups finished their models completely and the students were very happy. My dad took some pictures of the models when they were completed.

The next day, we dismantled the sets and started with the next design. This time, the student groups were able to build the models mostly by themselves. There were some students who were in 1st grade and needed help. I corrected some issues in their models and the students were then able to finish it by themselves. My dad once again took some pictures of the models after they were completed. I did this volunteering for three weeks and each time, I could see that the students were eagerly waiting for me to come so that they could build the next model. At the end of the volunteering work, I asked my dad if I could donate the Lego sets to the students. My dad agreed; he spoke to ActionAid and donated the Lego sets so that the students could continue to use them in building different models. I felt very happy and satisfied with this experience as this was the first time I used my interest in Legos to share it with other students. I am looking forward to sharing more models of Legos with students.

Contributed by Ayaan Raza, an ActionAid India volunteer who dedicated 3 weeks of his time to Thozhamai, our ally in Tamil Nadu. Ayaan was able to teach the children of Semmencherry how to make models using Lego sets. Ayaan is a 4th grade student in Baker Elementary School in San Jose, California. 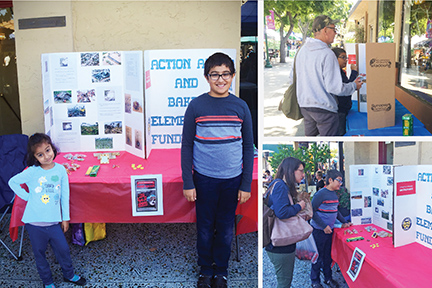