bbbp – WHERE ARE WE? a status report 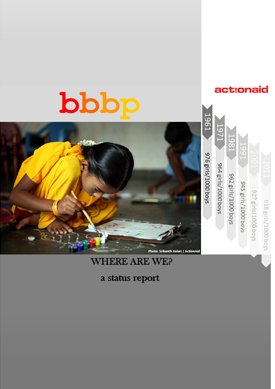 ActionAid India welcomes the ‘Beti Bachao, Beti Padhao’ Scheme (BBBP) launched in January, 2015, and the strategy of addressing the issue of declining Child Sex Ratio (CSR) through a nation-wide mass campaign focused on multi-sectoral interventions in the 100 districts identified as gender-critical. In 2016, the scheme was expanded to 61 additional districts. This status report is an attempt to objectively look at the ground that we, as a nation, and in particular, the gender-critical districts have covered since the launch of BBBP through the set of “Monitorable Targets” set out by the scheme. These include improvement in Sex Ratio at Birth in the gender-critical districts, reduction in gender differentials in Under-5 Child Mortality Rate, improvement in the nutrition status of girls, increase in girls’ enrolment in secondary education, provision of girls’ toilet in every school, and promotion of protective environment for girl children. In addition, ActionAid India, after due consultations, has also come up with a set of recommendations which it is honored to place before the Ministry of Women and Child Development, Government of India, for their kind consideration. We have strongly recommended that the recent move in some quarters to dilute the Pre-Conception and Pre-Natal Diagnostic Techniques Act is counter-productive to the whole Scheme and will take back the small gains made after so much effort. ActionAid India would continue to be closely engaged with the national and state governments, with civil society and all other relevant stakeholders in furtherance of BBBP’s core objectives – to save every girl child, and to educate her too!